You are here: Home / Social and Moral / THE OMEN – Social Short Story 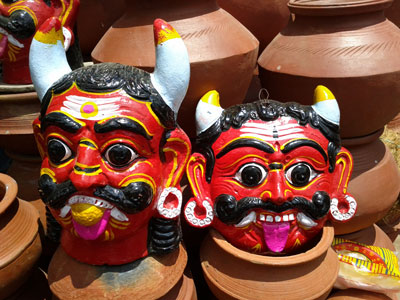 The sun emerged from the sea at dawn in the small village of Kattak on the Konkan coast. In the very same hamlet, along with the sun rose Sagar, a potter by profession, as he did everyday.

Sagar cracked open an eyelid on hearing the sound of his neighbour’s rooster, his usual alarm clock. Still dazed from his slumber, he hauled himself off his hard straw bed. Yawning widely and stretching his limbs Sagar lumbered to the other end of his small thatched hut. The hut was bare except for his straw bed, a clay idol of Lord Ram which he adorned with fresh flowers daily and a few pots and pans.

Sagar was a simple man who had never ventured out of his village. He was enamoured by the tales Vaayu, his best friend, told him about the Big City. Vaayu being a merchant travelled to the city very frequently in order to buy and sell wares and though his knowledge of the outside world was limited, it was enough to mesmerise Sagar.

Sagar practised a fair and honest trade. He was hard-working, god fearing and righteous. In fact Sagar had never so much as touched a drop of alcohol or smoked a single bidi in his life of thirty- five years. He condemned these activities and considered them only as ways of corrupting one’s body, mind and soul; eventually earning oneself a one-way ticket to hell.

After freshening up, Sagar stepped out of his hut with a pot in order to fetch water from the village well which was about a mile away. His eyes roamed across to the pots he had carefully crafted over the past week, now ready for sale. However something else upon his pots caught his eye – something that did not belong there. The richly decorated busts of two demons, which looked as new as if they had just been sculpted yesterday, lay fitted on top of two of Sagar’s pots – so perfectly fitted were the two that it felt as if they belonged to the same statue.

The faces of the demons were painted bright red, their horns large, tongues outstretched and eyes opened wide in order to invoke terror in the mind of the beholder. The white tilak smeared across their foreheads and the pearly white loops worn in their ears clashed magnificently with their otherwise fiery countenance. These demons were an evil omen in those regions and Sagar could not help wonder who had left them there and why.

Curiosity overpowering him, Sagar lifted the larger demon bust by the horns and peered into the pot. He was pleasantly surprised on seeing that it was almost full to the brim with clear water. Quickly deciding this incident was nothing short of a miracle; Sagar thanked God profusely for saving him a long tedious walk to the well and took a long swig from the pot.

Hardly had the liquid passed down Sagar’s throat when he began to feel uncontrollably dizzy. The pot fell from his trembling hands smashing into a thousand smithereens on the ground with the liquid quickly disappearing into the parched ground. Leaning against the cracked wall of his hut to steady himself Sagar buried his spinning head into his hands. Just when Sagar had become steady enough to conclude that the liquid in the pot was not water, but most likely alcohol, he heard a heart wrenching scream of a dying animal.

Gathering himself immediately Sagar ran towards the source of the sound which led him into his neighbour, Chatursingh’s compound. The horrific sight before him rendered Sagar speechless and incapable of movement for a minute. He watched on appalled as Chatursingh continued to beat a whimpering half-dead cow mercilessly with a whip. Coming to his senses Sagar tried to stop the enraged Chatursingh but in vain. Cows were worshipped as gods for the invaluable milk they gave which could then be converted to a host of other products. Killing a cow was considered a sin of the highest degree. As punishment not only would a culprit rot in hell after his death but would also be treated as a social outcast and be banished from the village for the rest of his life.

As the possessed Chatursingh continued to ruthlessly abuse and whip the lifeless form of the cow, Sagar realised something that made his blood turn cold. This was no ordinary cow- this was Gopi- the favourite cow of the village headman Ramsukhji. As soon as the words, “It’s Gopi ” escaped Sagar’s lips Chatursingh stopped in mid-blow. A terrified expression dawned on Chatursingh’s face as he realised the implications of these two words.

Sobbing hysterically, Chatursingh began to explain, in broken terms, the reason for this ghastly incident. Sagar gathered that Gopi had entered Chatursingh’s compound unnoticed and had proceeded to feast on his freshly harvested crop of corn heaped in one corner. On seeing his crop ruined Chatursingh lost control and began to beat Gopi.

Finally after a lot of persuasion Sagar convinced Chatursingh to tell Ramsukhji the true story and beg for forgiveness. On Chatursingh’s request Sagar agreed to accompany him.

On reaching Ramsukhji’s house they found him attending to some finances of the village. While waiting Chatursingh was a nervous wreck and understandably so .Ramsukhji was a reasonable, practical and understanding man on the whole save for some sensitive topics, on which he had a rather churlish and irrational disposition. And one such topic was his favourite cow Gopi whom he treated as his own child.

When Ramsukhji finally attended to them Chatursingh’s mannerisms changed completely. Employing a innocent and pleading tone he launched into a story- the story that sealed Sagar’s fate forever .With folded hands Chatursingh began, “Sardar, I returned from the village well today to find an intoxicated Sagar beating your beloved cow Gopi who appeared to have broken a few of his pots. I tried very hard to stop him but with no avail. He finally killed the poor animal and then had the audacity to drag its corpse outside my house in order to frame me. If you don’t believe me, sir, just smell his breath- it reeks of alcohol.

Sagar began to splutter inexplicably and protest weakly on hearing this wickedly twisted version of the story. Ramsukhji on the other hand was torn between grief, disbelief and rage along with an inability to process that his Gopi was no more.

“Silence” said Ramsukhji in a dangerously quiet voice and marched up to Sagar. He then inhaled deeply, the smell of the accidentally consumed alcohol filling his nostrils. Sagar saw Ramsukhji’s eyes harden and he knew all was lost.

In an icy cold voice Ramsukhji continued, “I would have never believed this of you Sagar. Get out of our village before dawn tomorrow and never return.” Sagar knew there was no point in arguing and so without a word he turned around and left.

Sagar walked back to his hut in a daze, his whole world crumbling around him. He saw no way of getting out of this predicament. He knew that none of the villagers would believe him now that Ramsukhji was against him. The only person who would believe Sagar was Vaayu and he too had gone to the city for a few days.

Sagar sat in his hut the entire day staring blankly at a wall. Not once did an ill-thought regarding Chatursingh or Ramsukhji cross his mind. He blamed only himself for his misfortune. Sagar had been born and brought up in this village of Kattak and had never ventured out. He had always assumed that he would live a long peaceful life right here in this hamlet and after his death his ashes would become one with the soil of Kattak.

As the sun slowly began to fade away and darkness began to creep in, Sagar stepped outside his door. Once again his eyes fell upon the bust of the second demon lying on a pot. The demon seemed to speak to him and he stared at it entranced. When he broke out of his reverie, Sagar found that the sun had long since set but it did not matter as he knew what he had to do.

Sagar mirrored his actions of the morning, lifting the demon head off the pot by its horns and staring at the clear liquid inside. This time knowing the true nature of the liquid, Sagar deliberately drank deeply from the pot, draining it in a few seconds. After this, Sagar threw the pot on the ground letting it shatter into a million fragments; just as his life had a few hours ago.

With his senses barely functional and the bust of the demon still clutched tightly in his hand Sagar stumbled ahead, into the darkness, without so much as a backward glance.

After wandering about for a long time with the full moon following him silently, Sagar finally found his way to the beach and looked on at his namesake- the sea or sagar. The waves that crashed on the shore seemed to beckon to Sagar and their call grew louder with each receding wave. Sagar was only too happy to answer their call and with the demon head still in his hand he clumsily hobbled into the sea, the only place where he was wanted. Sagar stumbled forward unaware of the rising water, strong winds and the high tide. One by one his waist and neck vanished underwater and with one high wave Sagar vanished forever.

After a few weeks, in another coastal village, the fishermen were about to go to sea at dawn when they noticed that the waves had washed something off on the shore. On getting closer they realised that it was a rotting corpse of a person. Each hand of the corpse held the red bust of a demon, new and freshly crafted, as if it had just been sculpted yesterday.