You are here: Home / Social and Moral / A Thinking Man 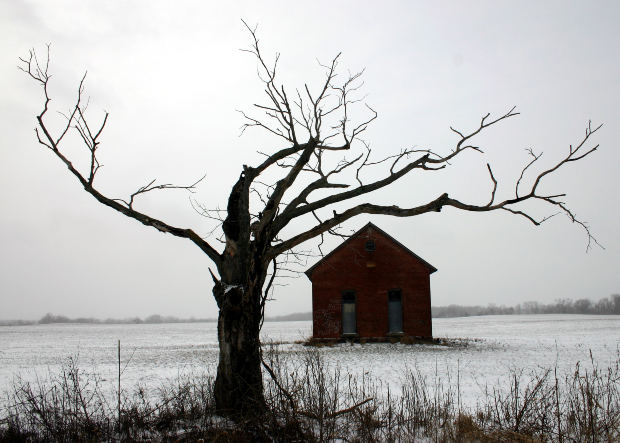 Once after being content with their work, a group of workers who had built a number of buildings to provide shelter as well as working place for people of the town, just from gesture of goodwill, decided to hire a thinking man who through his vast knowledge would help them give directions and make their purpose more meaningful, as they thought of themselves as mere workers who adhered to action after recognizing the problem of the masses as their own. To avoid the strenuous task of choosing the right man they only invited the most qualified from the town and put a set of questions so as to judge the best one among them. They put up following three questions to the thinking man.

‘Will our progress affect the structure of the society?’

‘Yes, societies always look for change. Any progress or deterioration is bound to affect the society.’

‘What should we do when we are content? Is progress necessary then?’

‘Yes, we cannot stay content for long. A static system cannot remain in accordance with society. The idea of being content is merely an ideal state of mind; it is progress that drives our system.’

‘If the structure of the society collapses are we to be blamed?’

‘No, a society is responsible for its own course of action. If it collapses it is because of its own thoughts and action.’

The members were quite satisfied with the pragmatic nature of the reply and so, the thinking man was hired to carry forward the organization. In first few days he simply analyzed the work of the organization and saw how the work was done without an order or a system and merely depended on the needs of the people. He said to the members ‘Without a proper order we can run into a chaos which consequently will bring our downfall. An order and a system are imperative’.

One of the member argued ‘this is the system. We build things when there is need from the people. It works on the simple principle of demand and supply. ’

The thinking man replied ‘The need of people may vary from time to time and if people are open to new ideas then there will be a gamut of needs of the people. We won’t be able to able to cope up with the needs and it will again lead us to chaos.’

So a system and order was placed in the organization. Each one was assigned a role and was asked to adhere to it with complete devotion. The order and system brought a great satisfaction to the members and each one worked according to their role. Soon, work began to progress smoothly, everything from scratch was done in a streamed line way. After a few months the organization did great work in the constructing buildings all around the city but the members had become a bit disconnected as each one was occupied in his own work which they were asked to follow religiously, so anyone hardly got the time to sit around or converse. They considered it to be a minor sacrifice for the organization which they had began with own hard work and diligence.

In summer an epidemic broke out in the city the consequences of which were quite devastating as few hospitals the organization had built were not enough to compensate for the loss. After the tragedy the members regrouped and unanimously decided to build more hospitals as a measure to prevent such catastrophe. They put this up to the thinking man for his consent to which he argued ‘if you build more hospitals there will be no use of them in the future as such epidemics only come once in decades. But it is true that if we build few more hospitals for the educated classes it can minimize the damage. You see because of scarcity of treatment many from the educated class suffered. For progress, it is important to save the educated class.’

One member expressed his doubt and asked ‘ Shouldn’t we then build education centres?’

‘Only if education centres could help cure diseases, but such is not the case.’

All agreed once again and hospitals aimed only for the educated classes were built where it was clearly distinguished that other people had to go the other hospitals. There was great appreciation from educated class and the others hardly contributed any thought to it. With the thinking man at helm things looked more in order and organized and the appreciation from time to time only corroborated the belief of the members.

In between, after things had regained normalcy, there were rumours that the epidemic might spread once again and there was panic all around. So again, the members sat down and decided that such rumours were rising from the uneducated masses and it was important that they built some educational institutes and help mitigate the panic from the rumours but the thinking man doubted their decision and said

Soon religious institutes were built all over the city. After few months there was a clear segregation in the society based on the varied faith. But it did not affect the harmony which had become somewhat frail. The members were quite content with the work once again. They were happy that they had worked in the right direction under the guidance of the thinking man as they were still building things for the good of people, moreover, providing them with options to choose and hence advocating freedom of choice.

When the members felt that it was a long time since they had been together they decided to take a break and ease away for a while. They asked the thinking man to take a break himself as there was time enough for them to take a hiatus but he refused and said ‘if we all take a leave now our work will be abandoned, so I suggest that all should not leave together rather go intermittently. The time is ripe for us to act wisely. It is now that our real progress can start, until now we have been merely building a base for our work.’

The members listened to him in astonishment, for they had not conceived their nature of work in such a way. So one of them once again asked ‘we are done with our work for the time being. What should we do now? Isn’t it also important that we spend time together as we used to. It is almost as we have forgotten each other.’

‘You see, our togetherness comes from our work and we should adhere with it. It is certain that all of us need break but we need it for our own personal relaxation. In going together, that might be disturbed. If we do it in a correct manner each one of us will only gain from the idea. If an individual is unhappy then a group also cannot be happy. ’

It was decided that the members will go on break one by one. Days passed by and the members continued about their work but not in cohesion as it was in the beginning. After few months it was predicted that there will be heavy downpour during the rains. People were cautioned about the adverse effects the rain could bring. There was a big concern from the farming class about the lack of storage. The members sat in once again to discuss the plan of action. Thinking man said ‘the action is quite simple. We need to build the storage at the earliest’

To this one of the members replied ‘but should it be our priority? I mean the heavy downpour is bound to cause destruction. We should rather re strengthen our structures’

Another one said ‘It is also important that transportation does not comes to a halt otherwise it can cause havoc. I think we should prioritize the construction of roads.’

A third one said ‘All of you do raise good concerns but if we think a little wisely we can store the rain water and supply it to the deprived regions of our state. We should not give up on our goodwill.’

The thinking man gaped at each one of them from one person to another. It was the first time there was an argument among the members of the organization who were insistent on their own concerns. Finally when they were unable to come to a conclusion it was decided that each one would go their own way as now they were capable enough to handle things on their own. Soon they all plunged into action which seemed more like a competitive one rather than a cohesive one. Neither of them cared to help the other one and, just by sheer misfortune, neither of them could complete their work as the downpour came a fortnight early.

It rained heavily for a week which was followed by utter chaos. Encountering such disasters in a shot span made people to believe that it was only work of nature and one of the religious communities must have done something displeasing so as to let nature to cause such devastation. The period after the rain was worse as diseases had began to take toll on the people. The division of the hospitals created a rift amongst the people, as no one had expected such a situation will arrive so soon. The storage which were being built for the farmers, shattered to the ground on the third day of the rain as they were still in the process of completion. This led to a great wastage of food, so soon a food crisis followed which added to the panic of the people.

Six days after the rain there was complete chaos in the city. Distrust, paranoia, depravity had crept in the city along with the rain and it fell as hard as the rain had poured down.

Looking at all the devastation and havoc the members and the thinking man regrouped once again. The thinking man asked ‘Why does society always choose the path of destruction?’

One member replied ‘It is the way of nature. We learn from nature and if nature chooses to destroy then so does our society’

‘Does that mean societies are averse to harmony or rather progress with harmony?’

‘Harmony can exist only up to a point, and then it is bound to break. It is merely an idea conceived to keep oneself at peace’ replied another member

‘If a society is on path of devouring itself what should we do?’

‘This is a circle, there is no start to it and there is no end it or maybe it is a downward spiral which will end when things cease to exist’ spoke out a third member.

One of the members who had been hearing the conversation from the side as he had been during all the conversation kept looking at the table where the men sat and pondered over the change that made it difficult for him to recognize his own friends. He left the room wondering whether they too were the part of the society which was on its way down to collapsing.