You are here: Home / Social and Moral / The day it rained compassion and humanity! 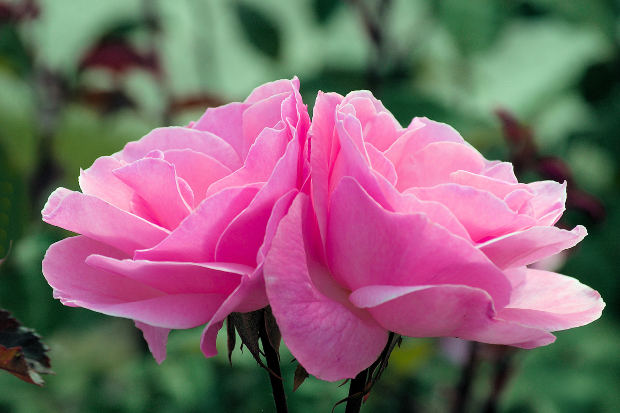 Every now and then nature takes its toll on humans. That’s nature’s way of warning us, inspiring us and teaching us. Nature was at its angry best, some 11 years back, in the city of Mumbai, India where the human spirits were tested, angels were sent forth to help re-instate our faith in humanity. When the city saw the heaviest rains and flooding. I was there along with my children (6-year-old and 6 month old), my husband and my brother-in-law, bearing the brunt of the angry lashes of nature. The year was 2005.

This story is about unsung heroes, few of whose faces and names I dimly recollect. But then, it is narrated straight from the heart, and the heart they say does not need clarity in names and faces, it needs clarity in feelings of gratefulness, blessedness.

We were stuck inside a cab in the middle of the road in our attempt to reach home from the airport. Panic and disillusionment overpowered us as the water levels kept rising. We were hearing stories on human destruction every where.

Realizing the impending doom that would engulf us, in case we stayed in the cab any longer, we managed to find a small dingy motel on the top floor of a building. My wailing baby, ourselves hungry, thirsty, worried and famished; all of this was driving us to new levels of panic and anxiety. The motel, dark and dingy with no electricity & water further seemed to seal my hopes.

I prayed fervently and decided to go down the stairs in an attempt to control the crying baby. I spotted a lady standing at the door of an apartment. I asked her for little water for my child. The lady immediately ushered me inside her home and gave me water. I told her all that had happened and she asked me to call the rest of the family in to her house. We were welcomed by her husband as well and both seemed around the age of 60 or over.

That was the moment I felt we were saved. When after hours of waiting, our cab found a ‘U’ turn and found us a motel at the right moment, we were saved then too. Guess “our time” had not yet come!!

Coming back to the story, we were told to stay with our hosts until the rain stopped. As I have been thinking that I was lucky to have found my saviours, little did I realize that the old lady and her husband were extremely perturbed and tensed themselves, as their son and his family had not yet returned home. The lady was waiting outside her home in her own helpless way, praying for her family’s safe return. That’s when she found me, a fellow human being in distress and decided to put all her focus on me and help me. They were more debilitated than us, yet they chose to assist us even though their mind was in greater turmoil worrying for their son, his wife and two young daughters.

We continued getting news of people drowning and dying…..imagine the dilemma the old lady and her husband would have been in.

All through this, my brother-in-law was also under great mental stress as his daughter with some other children and few staff was stranded in her school with no electricity, food nor water. My heart shudders with fear at the mere thought of it. Still, he saw the brighter side that we were safe and kept his worries sweeped in a corner of his heart.

Humans possess this virtue – of putting others in front of themselves, like parents put their children, soldiers put their country and many such.

While, we were made comfortable, the old couple’s family had not yet returned. After abour midnight, they returned to great relief and joy and were surprised to find absolute strangers sleeping in their hallway. We greeted each other and thanked God for keeping us safe. In early wee hours of the morning my brother in law braved out to his daughter’s school to haul her to safety in her home. Upon returning he narrated the position outside which sent shivers down our spine. He had to lift his daughter and swim as the water level was very high and on the way he saw many still bodies of humans, cows etc floating in the flood. People stuck on the road in cars had drowned.

We were taken very good care of by our hosts, the true meaning of athithi devoh bhavah (Guests are God), beautifully preserved. The rain finally stopped. We gratefully bid out hosts goodbye thanking them profusely . All we could do was present them with a gift (a typical NRI gesture) which was of least prominence compared to what they had done for us. There is no words to express the kindness showed by them especially with the fact that they too were in great ordeal and could have easily ignored us as they had troubles of their own.

Throughout there were other brave stories of human kindness everywhere as people where out to prove that it is not only the skies that have opened up, even the human heart!

Today while my sons are doing Terrorist drills at their school, reminding us of the darker side of human life, the other side of the coin, I would quote Mahatma Gandhi: “You must not lose faith in humanity. Humanity is an ocean; if a few drops of the ocean are dirty, the ocean does not become dirty.

Let’s all try and be the cleaner part of the ocean of humanity, not the dirtier one!

These unsung heroes, be it the family who helped us, the cab driver (who risked his life by agreeing to take us to our destination in the killing rain), the motel owner (who managed to give us a small room in the chaos and confusion) and my brave brother-in-law, all have thought me that “an individual has not started living until he can rise above the narrow confines of his individualistic concerns to the broader concerns of all humanity!”- Martin Luther King, Jr.