You are here: Home / Social and Moral / Story for Dog lovers 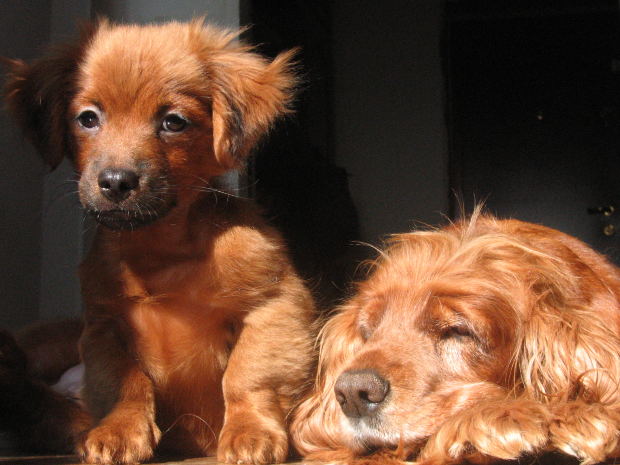 Sujatha fed “Funsy” the grey Spaniel, petting him and fussing him while he ate his food. She, a teenager, loved this dog very much and the dog loved her too and he showed it again now by wagging the tail faster as he put out his long wetty sticky tongue and licked her on the face. Sujatha hugged him lovingly. It was a joy for Funsy to see Sujatha or the other members of the family, her papa and mom, but with exception of one, and that being her elder brother aged 25, Sadmesh. The dog was very uncomfortable with this guy. Sadmesh was a very mischeivous, badly behaved lad who took “pleasure” in hurting “Funsy” and had made it his favourite pastime.

Now, as soon as Sujatha went into the house after feeding Funsy, Sadmesh or “Saddie” as his schoolmates called him… decided to have one of his pranks again. Funsy after having fed enough, now lay in the corner relaxing, feeling drowsy, and its eyes almost shut in sleep, when suddenly there was a “schwwuuuucccck” and the dog yelped as it felt a tinge of pain. It was Saddie who had hit the dog with a rubberband and he stood there laughing horribly now at the dog’s discomfiture.

He now unleashed the dog and told his sister when she came running out hearing the yelp that he was taking Funsy out “for a walk.” By the time the dog returned from the walk, it felt really exhausted and irritated, with the different “tortures” that it had to undergo because of Saddie’s sadistic nature. But Funsy bore everything with a “faithful” animal understanding that Sadmesh belonged to this family, and that Sadmesh was one of “Funsy’s masters” who could treat him any way he wanted, especially since they were feeding and taking care of him (poor faithful dog). This rather unfortunate “set up” for Funsy went on for quite a long length of time… until one day.

It was 3 days before Diwali, and Mr. Saddie got “ideas” again of “Funsy torture,” his great favorite pastime. While he lit the crackers, he observed that Funsy was “scared” of the noise and “shrunk with fear” and had moved to the far side of the shed shivering and whining. Saddie got a mad twinkle in his eyes. As usual Sujatha fed the dog that day and Saddie told her that he will take the dog out for a short walk and come back soon. This he did forcefully despite Sujatha telling him NOT to bother Funsy for 2-3 days until the cracker season got over. But Saddie NEVER listened to her good advice and he had made up his dirty mind already.

So out the dog went for a “walk” again in a “terribly scared” state with Mr. Saddie holding tight on to the leash with the long cane in his hand snapping a “scchhhwooock” every now and then as usual. As they turned the lane and were now hidden from their house, Saddie put his hands in his pocket and pulled out some medium sized “bomb crackers” which he slowly unpacked and tied with a strong rope, his eyes gleaming wickedly. Funsy just sat there unaware of what was in store for him in the next few minutes. Saddie now feeling satisfied with his work, his lips curving up on the sides with a cruel smile as heartlessly he now tied the “explosives” with a 2-feet length string to the animal’s hind leg. Sadistic intentions rose to the “peak” for Mr. Saddie for he now got up and without the least hesitation in mind “lit” the bombs. As the first “exploded” poor dear Funsy was “wild with fear.” He jumped 4 feet high in the air and Saddie laughed loud. He was enjoying thoroughly. For him it was “great fun” seeing the Spaniel run helter-skelter in fear.

But suddenly something strange happened!!! … Saddie got the greatest shock of his life now…!!! for the Grey Spaniel in full force directly hurled itself at him. Yes!!! Funsy had “decided” he would take it no more. The dog now pushed to its limits of endurance chose to attack the bad boy.. It bit Sadmesh once and then again, and again. Saddie started yelling “the brute.. it is biting me… help help”.

A single “gun shot” was heard amidst the cracker bursts and brought onlookers running to the scene. They saw that the “bullet” had hit Sadmesh right on the heart and he was “dead.” The dog scared of the gunshot, ran away swiftly somewhere.

At twenty paces away stood an old man with a smoking rifle in his hands, his face grim and tough looking. The onlookers were just too shocked to react and simply stood there watching the horrific incident. Someone shouted “call the police” “inform the boy’s parents” etc. etc. A person who stood near to the old man heard the old man blabber “I killed the BEAST… was afraid I would miss him … but I am happy my shot was perfect and killed the BEAST.” This man who overheard the old man’s blabber … thought the old man must be suffering from poor vision … so he went nearer to him and said “Grandpa, you are mistaken.. you killed the boy and not the animal.”

The old man slowly put his rifle away safely and with a very satisfied look in his eyes stared for a minute at the person. and then told him clearly enough “I said I killed the BEAST… didn’t I??… I never said I killed the dog” and having said this he started walking away and turned a corner.

The person stood there a bit confused after hearing this from the old man but it took him just a few seconds to absorb what actually the old man meant, and now as the full impact of the statement struck him, he knew that killing the boy HAD BEEN “intentional” and then as he slowly and carefully analysed the event itself as it unfolded, he understood that the old man must have been a very very ardent dog lover and he was silently convinced that the old man had “done” and “used the right word too.” The person knew every dog lover would feel the same.

He now saw the old man just turn off the bend and ran to him to talk to him but as he turned the corner he did not see anyone there. No old man found anywhere at all!! The police came. They inquired and then searched the town for the old man who they never were able to find at all.

BOTTOMLINE: Love animals, do not torture/mistreat them … and STOP others from doing so too, however, not with a rifle please!!! … ;)