You are here: Home / Suspense and Thriller / THEFT WITHOUT A THIEF 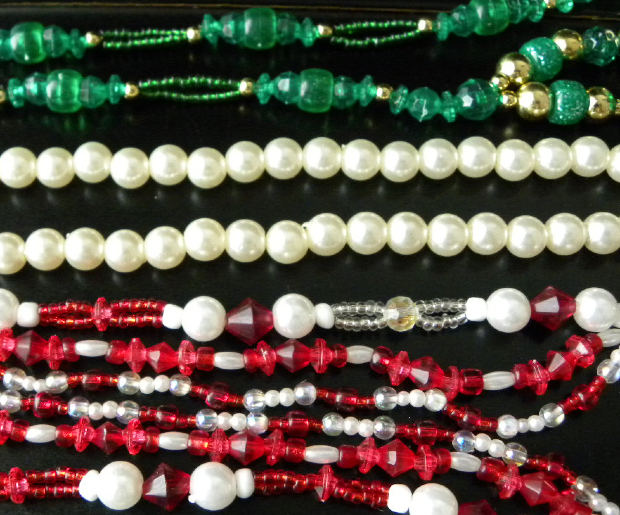 Rizwan was sitting in his cozy room. Scrutinizing two white colored stones with his powerful lens. At last getting tired, He put them on the table and stretched himself on the sofa. He was just closing his eyes when the bell rang. He reluctantly helped himself to the door, trying to look fresh. He opened it and there stood a handsome looking gentleman wearing steel rimmed spectacles. Rizwan brought him in and ordered a cup of coffee for his visitor, as he was looking very cold.

“How can I help you sir?” asked Rizwan in his soft voice, after they have seated themselves comfortably in the sitting room.

“As you can see yourself by my poor condition, I am in grave trouble” replied the visitor with trembling hands. “My name ——–“

“Is Mr. Shabir and you have three sons and their names are Parvez, Rehan and Mudassir” interrupted Rizwan. Shabir sprang up from his chair.

“One more thing that you are a widower” added Rizwan.

“What you know me then” Shabir said in amazement.

“No, but I must tell you that you have parked your car perfectly”

“It is simple. Your car have four names on it, actually there are five. But one is repeated. On its back side are three names, probably of your three sons. And on the front are two names, your name on the top right and the name of your eldest son repeated on the top left. His name is repeated twice so, I deduced that he is the eldest. But now the question remains that where is the name of your wife. So, I think that her name was on the top left of the car. But she died and then you replaced her name with that of your eldest son Parvez. Am I right sir” explained Rizwan and leaned back in his rocking chair.

“Brilliant! You are correct on all accounts” replied Shabir sitting back in his chair.

“So, you were saying that you are in grave trouble” said Rizwan trying to bring back his guest to the topic.

“Yes, but you surprised me by your deduction”

“Tell me your story sir, I am very curious.”

“Solving this mystery is like to seek the moon in the clouds. I will be brief. My brother Bashir’s marriage is going to take place on Thursday. Three days from today. He is not a very rich man. So, he had obviously brought jewellery for his marriage. He thought that there was no safe place in his house to keep the jewellery. Therefore he requested me to take care of his jewellery. I agreed with him knowing that I have a good safe in my house. I took the jewellery box and secured it in my safe. This was on Saturday.”

“Wait a second. Do you check the jewellery yourself in the box?” interrupted Rizwan.

“Well I locked the safe and put the key in its safe place which nobody knows, nobody except me. This was as I already told you on Saturday. After that I had a sound sleep. On the next day the children went to tuition and I also went to my duty after locking the house safely. That day I returned quite late in the evening. The clock struck eight when I reached home. I had my dinner and then I watched T.V till ten O clock.  After that I went to my room and remembered the jewellery box. I opened the safe to check that everything was alright. I found the jewellery box there and opened it. You can imagine how shocked I was to find the box empty.

“What! The jewellery was gone” exclaimed Rizwan.

“Was the key in its proper position?” he asked.

“Yes, it was where I had left it. Not a soul had touched it” replied Mr. Shabir.

“The jewellery was gone. I didn’t tell anybody about this. On that night sleep refused to pay me visit and I tossed all night restlessly. I think the matter over and over again but was unsuccessful. So, I came straight up to you for help. What do you think, can you find the moon in the clouds” asked Mr. Shabir.

“I will leave no stone unturned” replied Rizwan.

“That is what I expected from you”

“Where do you live Mr. Shabir?”

“I will be there before noon. There are some points I need to look into before taking any steps.”

“Alright, I will be waiting for you” said the visitor and closed the door behind him.

Rizwan leaned back in his chair and started to make theories. He had a cup of coffee, and was as good as his words. At about noon he reached Nehru square. There Mr. Shabir was waiting for him. He took him to his house in lane 3.

“Thanks for coming Mr. Rizwan. I am at my wits end”

“It is an opportunity for me. How can I miss it” replied Rizwan.

“So, from where do you want to start Mr. Rizwan”

They went to Shabir’s room and he opened the safe for Rizwan. Rizwan gently took out the box from inside it. He opened it, nothing was inside it. He touched the surface of the box.

“Oh! That is interesting” said he peering inside the safe. He checked the inside of the safe and also examined the room carefully.

“Was the door locked before you went out?”

“Yes, the door of my room was locked properly and all the windows were bolted. I am sure about it” said Mr. Shabir.

“And when you returned everything was as you left it. I mean nothing was disturbed”.

“No, not a thing was moved except the jewellery”

Rizwan went from room to room checking everywhere for clues. When the rooms were finished he went into the garden and scrutinized the ground. But without any success.

“Are you out of you depths Mr. Rizwan?” asked Mr. Shabir.

“No, not at all, I think that I know who the thief is. Actually there is no moon which we are seeking for. There are only clouds”.

“And now the clouds are also quite clear”

“Will you please for God’s sake tell me what is all this?” pleaded Mr. Shabir.

“Where can I find your brother?”

“He lives in Nagri, you will find him there. But why do you want him?”

“Can you meet me at my house at Bun-Doda street at five O clock sir. I will clear the clouds for you there” said Rizwan and went away on his bike.

At five O clock when Rizwan was having is tea the bell rang and Mr. Shabir showed himself in.

“Take a seat sir, and I will tell you the tale” said Rizwan to Mr. Shabir.

“First of all I must tell you that there was no thief in this case. There was a cheater and he cheated you badly”

“Who cheated me sir and how?”

“The one who gave you the jewellery box”

“What! My brother, but why do you think so?”

“Because this is the reality. Let me explain it to you” said Rizwan to the bewildered Mr. Shabir.

“The box which you brother Bashir gave you contained no jewellery”

“But there was something in it. I am sure about it”

“Yes, there was something in it. It was there in the box to cheat you”

“What was in the box and who stole it?” questioned Mr. Shabir.

“The air stole it from the box”

“I mean to say that there was ice in the box which thawed and then became vapours. But you thought that the jewellery had been stolen”

“But why would my brother cheat me in this extraordinary way?”

“Because he had no jewellery for his marriage, as he had no money to buy it. So, he gave you the box pretending that it contained jewellery”

“But how would he benefit by this?” asked Mr. Shabir who was by this time completely befuddled.

“Now he can’t benefit, but if you would have been unaware of this cheating you have to bring him new jewellery, because you had lost his ice-jewellery”

“Is this the reality?”

“Yes Mr. Shabir this is shocking, but believe it or not this is the reality”

“How do you come to the conclusion?”

“You remember I touched the jewellery box from inside. The water wasn’t completely dried up. Thanks for keeping the ice inside the safe. It helped me in solving the mystery. But you have a thief at last”

“The air which stole the ice-jewelry from the box, don’t let it go. Be careful or it may steal many more things from you house” said Rizwan chuckling.

“By the way I will never forget you Mr. Shabir” he added and went to his room very happy.

Because this was the second mystery he had ever solved. Now he was ready to solve any mystery put before him.