You are here: Home / Suspense and Thriller / KASHYAP-THE DETECTIVE 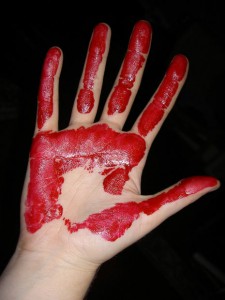 In Bengal Vibhakar Kashyap is a famous name. He is a middle aged man with an incomplete bald head. He is a detective. According to him criminals are the most creative people living on this planet. It takes a lot of planning and plotting to commit a crime and protecting own self. He has an assistant Dev Vyas. Both of them are best friends and partners too. They have solved a lot of cases and have been in headlines quite often. Now they have a new case in their hand. This one is in Durgapur. They reached the house and saw the police officers securing the crime scene. There was a dead body of a 16- 18 years old girl Riya Biswas. Her mother was in shock and father was crying aloud. Kashyap observed each and everything very carefully and asked Vyas to collect the evidences.

Kashyap-I am sorry but I really have to do this.

Mr. Biswas (crying) – We can understand but I request you “please find the man who did this to my daughter.”

Kashyap- Tell me in the correct sequence what happened.

Mr. Biswas – yesterday night our daughter went for a night out with her friends. I dropped her at Mishaka’s place at around 8:00 pm. We called her around 10:30pm before going to sleep.  She answered it but didn’t give any hint of some kind of trouble. Then we went to sleep. In the morning I heard my wife screaming I ran to the drawing room a…a…an….and saw my, my little girl lying on the floor in a pool of blood. She had a huge cut on her neck and there was a knife lying on the floor beside her.

Kashyap – did you touch anything?

Mr. Biswas – No we didn’t even inform the police our neighbors did.

Kashyap – okay, do you have more kids?

Mr. Biswas – No she is………was our only daughter.

Kashyap – how she came in did you open the door for her?

Mr. Biswas –no, but she had extra keys. May be she entered with the help of them.

Kashyap –When you came here the main door was open or closed?

Mr. Biswas – it was closed from inside and no window was open they were open they were all closed I remember because I opened the door for the neighbors.

Kashyap – do you doubt anyone?

Mr. Biswas – she never told about anything upsetting her.

Kashyap- maybe she had a problem. Ummmmmm can you give me Mishika’s address

Meanwhile Vyas collected the blood samples, fingerprints and other evidences. When they were about to leave for Mishika’s place Kashyap saw that something was there under the sofa. It was an earring. He took it and packed it in a small bag.

Kashyap- Who does it belong to Riya or her mother?

Kashyap- Mishika, please cooperate and tell us the truth. What happened last night?

Mishika- but sir……. Uncle who is this person (to Mr. Biswas). What happened?

Kashyap – I m a detective (showing his id). Your friend Riya is murdered by someone?

Mishika (starts crying) – but we just met last night. How is that possible?

Kashyap – first of all tell me, do you know who this earring belong to?

Mishika- no it’s not mine…. and I don’t know who it belongs to.

Kashyap – tell me what all happened last night?

Mishika- last night when Riya’s dad dropped her to my place there was a party going on. Riya had a boyfriend Neil. They were hanging out together.

Mr. Biswas (interrupting her) – What…… but she never told us.

Kashyap- Mishika this is not important write now tell me what happened after that.

Mishika- then after sometime both of them went u to the terrace at around 10 pm then I didn’t see any one of them.

Kashyap- can you tell me Neil’s address?

Vyas – okay you leave. I’ll go to the lab for the reports let’s see what the reports suggest.

Kashyap – Mr. Biswas you should leave now I think your wife needs you.

Kashyap- So Neil tell me what happened last night?

Neil- Nothing sir I was just chilling out with my friends. What happened sir?

Kashyap – Riya was found dead at her place.

Neil – but…but how is this possible. Shit

Kashyap- now tell me after you went to terrace what happened?

Neil- nothing much sir I gifted her pair of earring and….

Kashyap – sorry to interrupt you but is this the one you gifted her (showing her the earring).

Kashyap – I found it from her house now tell me what happened after that.

Neil – nothing sir she was feeling uneasy so I dropped her to her house.

Kashyap – do you remember the time?

Neil – yes sir it was 1:06 dot because I called my mother that time.

Neil – sir I want to tell you something.

Kashyap – thanks Neil this will help a lot.

For the next few days Kashyap was busy interrogating Riya’s neighbors and her friends and he came to know that the neighbors used to her shouting voices from Riya’s apartment. They used to fight a lot. Her friends also confirmed it that Riya mentioned about the same to them also.

On arrival of the reports.

Vyas – Kashyap, the knife found in the house have some fingerprints of Riya her mother and her father.

The postmortem report suggests that Riya was drunk that night and the time of murder was around 1:30am to 2:00 am. And yes the blood stains were of Riya only. But apart from this Kashyap we found some hair strands which belonged to Riya and there was no sign of struggle on her body.

Kashyap – Hmmmmm ….  And the doors and windows were closed from inside that means no sign of forced entry.

Vyas – all the evidences are against parents.

Kashyap – yes it might be possible that they would have killed her. Ok you carry on with the interrogation and I will meet you at Riya’s place in the evening. Make sure her parents are also there.

In the evening at Riya’s place

Kashyap – I just want you all to tell once again that what happened that night.

Neil – how many times will you ask us the same question?

Kashyap – no Neil this time I want to hear the truth

Kashyap – ok then I will tell you what happened that night. You were right Neil you dropped Riya at 1:06 am and called your mother but you never left. You followed her to her house …..

Neil (interrupting) – What, why would I do that?

Kashyap – don’t interrupt Neil listen. You followed her. She saw you coming but didn’t shout as she was drunk. Then you took the knife from their kitchen only with the help of your handkerchief, you were not even wearing shoes. Then you attacked her from back, cut her neck and dropped her on floor. Then you left the place.

Neil (sweating) – sir but the door was locked from inside how can you say that I entered and then left.

Kashyap – I m not done yet. Then you took Riya’s clip and took one of her hair strand and attached it in such a manner that I became a hook like structure. Then you went out and used that hook to lock the door from inside, took her clip out carefully and pulled the hair strand so that nothing I left behind. When the next day Mr. Biswas would have opened the door for the neighbors the remaining hair strand on the lock would have fallen off on the floor.

Kashyap – tell me Neil, tell me.

Neil (crying) – yes I have done this I loved her but she told me that she wanted to break up with me. She used to fight with me daily and hang out with Suyash. I was so jealous that’s why I planned all this. I thought that her parents would be blamed for all this as I knew about their fight with Riya and so I took advantage.

Riya’s parents were crying, Mishika was in shock she lost her two close friends, Neil was taken to the police station.

Kashyap – a…a….a I knew you would ask me that. When I told you to meet me in the evening at Riya’s place, I went to Mishika and asked for the photo graphs of that night. In them I saw Riya had tied her hairs up with 2 pins and when we saw the dead body her hairs were open. Then suddenly it strike me that when I was at Neil’s place that day, I saw a lot of clips lying on the side table. Two of them were distorted in shape, kind of hook like shape, and they were same as Riya’s. Then I assumed what would have happened. And luckily it was true. If her parents would have killed her they would have never left that knife on the floor. The knife was there only to confuse. Then I asked Mishika about Neil and Riya’s relationship. She told me that there was some problem going on between them but it was a usual thing. Then I brought Neil to Riya’s place and narrated my story in front of him and he admitted it. Now police will recover other evidences.