You are here: Home / Suspense and Thriller / The Lottery Murder (Part 8): The news at eight. 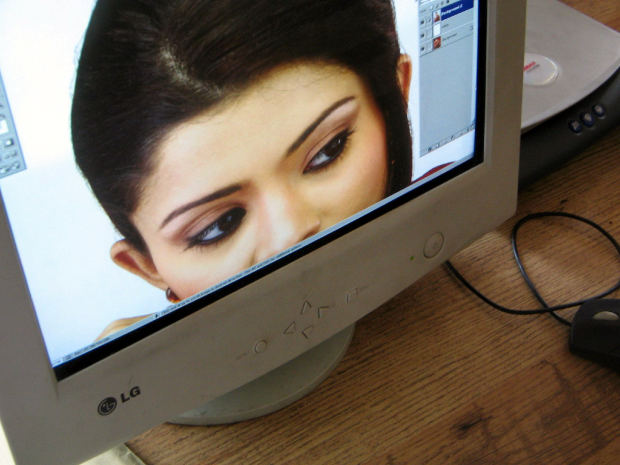 The Lottery Murder (Part 8): The news at eight.
Photo credit: kumarnm from morguefile.com

Harris found Collins looking haggard, thin, and blanched. It had taken him longer than usual to find Collins because he had actually managed to make it to his apartment for once. Harris felt a mix of disgust and pity. Maybe he’s taking the Lana’s death harder than he appeared to let on. Or maybe he’s just a bad drunk getting worse, or both.

“Bad news. We have to go to the police station.”

“Because of the confusion during your arraignment, the police didn’t actually interrogate you, or officially interrrogate you.”

“They pull this bullshit sometimes. Claim a form went missing, something wasn’t properly signed. They don’t like you for this, or at least they didn’t. They haven’t found any other suspects, so they have to do something, or look like they’re doing something.You really look like shit, but we’ve got to go. Just splash some water on your face, put on a different suit.”

Harris loaded Collins into the car waiting for them and called into the firm to have a doctor meet them at the precinct. Collins didn’t ever look good, but he looked much worse than usual. Usually he managed to stay a couple more steps ahead of his hangovers.

“You want to stop at a bar, get a quick drink?” asked Harris. “It might straighten you out.”

Collins shook his head “no”.

The doctor was waiting for them in front of the precinct. He took a quick look at Collins.

The doctor moved in toward Collins and took his chin in his hand, looked into his eyes.

“This man is going through withdrawl, but he’s on something.”

“We did advise him to quit drinking and using narcotics, to go get treatment.” said Harris.

“Bullshit.” said the doctor. “No treatment and he’d probably be dead, or at least in a lot worse shape than this. He’s on something for the booze and the heroin. What are you on, Collins?”

“Collins,” said Harris, “the DA is going to notice this. You don’t have to tell us what you’re on if you have legitimate prescriptions, but we need something, a statement from your doctor, a phone call.”

“He’s loaded on benzos and methadone. A shitload of benzos, otherwise whoever did this would have put him on buprenorphine. Benzos and buprenorphine together can cause respiratory problems, especially considering the astronomical dosages this guy would need to even look as bad as he does now.” said the doctor. “I know he looks bad to you, but he’s on his feet, no DTs, he didn’t puke or shit his pants on the way over. This man is loaded.”

“Why didn’t you tell us about this? Let us help?” asked Harris. He turned to the doctor. “I’ll get this postponed, have the car take him to a hospital.”

“No hospital. I talk to police now.” said Collins.

“But need to know,” asked Collins, “how they know?”

“When’s the last time you looked in a mirror?” asked Harris. “I had no idea it’d be like this. It’s good you’re getting treatment, but you picked the wrong day to quit heroin.”

“Not you,” replied Collins. “The cops. How do they know Lana was murdered?”

“You’ve got to be fu*king kidding me. You ever read a paper, watch the news? And what kind of fu*king lawyer are you?” asked the doctor.

“You know what Phil? You can go fu*k yourself.” said Harris. “I’m the kind of lawyer that got this dumped on me on a whim about three days ago, and I’ve spent most of that time chasing this idiot through dive bars and talking to hicks upstate. I’m an as**ole. I fu*ked up. I assumed Abrams had told him, or the cops. ”

“At least it’s an even playing field of incompetence.” said Dr. Phil.

“Don’t you get it? They haven’t shown him the pictures yet. Where’d you get your medical degree, the University of Phoenix?” Harris turned to Collins and took him by the shoulders, looked him in the eyes.

Collins staggered back agape. He puked all over himself and started laughing hysterically. Harris looked up into the sky, then quickly back to the top of the stairs near the precinct doors and then over at the street. A half dozen teams of reporters had somehow eluded him. They’d been expecting Abrams and didn’t have a great idea of what Collins looked like, especially in this condition. But the weirdness of the situation had got them rolling, and Harris’s horror at his realization of the completeness of this nightmare had appeared to set off a chain reaction of awareness. Now that they knew it was Collins, that this was the quarry that they had been staked out to snag, they bum rushed him. In an instant what seemed to Harris to be a million television cameras were on top of Collins’ maniacally laughing puke stained mug. “This couldn’t be worse if he was holding an ax,” thought Harris. To complete his failure, Dr. Phil was the one who took control of the situation. Salvage would be far too strong a word, but it was still a minor miracle.

“You vultures should be ashamed of yourselves! Against the advice of counsel and my medical warnings, this man insisted on coming here to help the NYPD correct THEIR error. This man was convinced he could speed up the investigation by coming here and he gets ambushed by you and possibly the NYPD, either through their malfeasance or ineptitude, neither of which would surprise me. Now if you’ll excuse me this man obviously needs medical treatment. What the hell is wrong with you people? I need to get this man to a hospital.”

Once Collins and Phil were in the car Harris found himself surrounded.

“Did Collins suffer a psychotic break?”
“Why did Abrams turn this case over to you?”
“How long has Collins been an alcoholic and a junky?”
“Is this a deliberate attempt at an insanity plea?”

“A good man tried to do the right thing today. The NYPD has been working hard on this case and we have been cooperating with them and the DA.”

He turned and walked into the police station. He had almost said that occasional oversights are made, he imagined hecklers from the crowd yelling “no sh*t?” Even more potentially disastrously, he had almost said that he had no doubt the real killer or killers would soon be identified and brought to justice. He thought to himself that he must have a death wish.

By the time he was 10 feet inside the precinct cops were pointing at him and laughing. One held a smart phone up in front of him. There was a particularly vicious image of a vomit stained Collins cackling, he caught snippets of the headline, phrases like “deranged lunatic”, a few choice words about his own intelligence, a derogatory comparison between himself and a fire hydrant. A smile played across his face, he couldn’t help smiling. He had a strange flashing insight that Collins was guilty, but he didn’t care.