You are here: Home / Suspense and Thriller / The Portrait 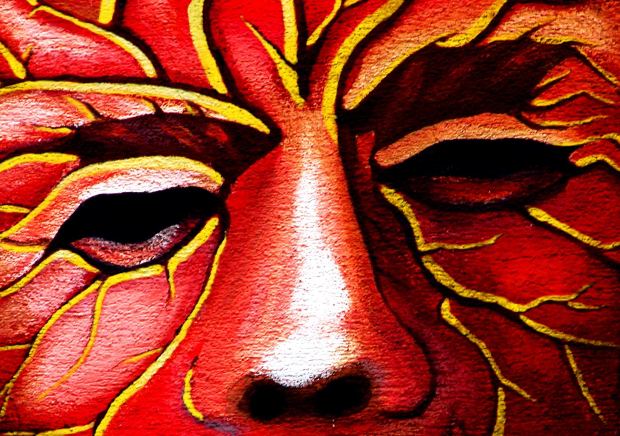 As the day at the office draws to an end Nikhil and Surya were eager to be united with their college buddies after a long time for a night out, where they had planned to watch a football game. Vincent had got keys to a big mansion which he would be taking care of for a friend who lives in US as the tenant had left without mentioning anything and being in US the owner was unable to find anyone so asked Vincent to check on it every once in a while. Having a night out planned Vincent invited all of his friends to the mansion.

Nikhil and Surya brought along some food, they decided to meet with Vincent and Niketh near college from where they would all go to the mansion. The mansion was situated far away from the city so by the time they reached the place it was late. They went in, turned on the lights and looked around the mansion. It was a beautiful mansion and as they were taking a tour they came across a portrait of three men. It was a strange one as the portrait looked ancient but the three men who were in it were modern.

But as the time was nearing for the match they turned on the television and sat around talking with each other when the doorbell rang. Surya opened the door there standing was a man who said that his car broke down and he wanted to use their phone to call someone as his mobile had run out of battery. They had no problem with that so they invited him in. He introduced himself as Sandeep, took their phone and called someone and narrated the recent events about his car and the current place he was residing.

After it they enquired about Sandeep and his whereabouts to which Sandeep replied “ Well I don’t do much of anything as I’m dead” to which all of them laughed and Vincent asked “ No really apart from the jokes and all what do you do for a living?”.

“I would have to do something only when I would be living and do you think being dead is a joke?” asked Sandeep with an angry face.

There was a sudden change in the expressions of Sandeep, he started arguing and a fight broke out eventually for no apparent reason it was as if he wanted nothing but to fight with them. The situation got worse when Sandeep reached for a knife from the table but Surya caught his hand and as they struggled with the knife the situation worsened and Sandeep got stabbed and he died due to the bleeding.

“But what about the car he came in and the friend who is supposed to pick him up?” asked Vincent to which Niketh said he would go take a look and try to hide the car but as he went out and looked around there was no car, they were no tracks either. By the time Niketh finished searching all around Nikhil and Surya wrapped Sandeep’s body in a cloth. Niketh told them about the car and as he finished the doorbell rang. They were in a state of panic as Sandeep was dead and his friend has come to pick him up, what should we do asked Niketh.

” Surya and I would hide the body somewhere inside while you people say that Sandeep had gone to his car to get something” said Nikhil.

When they dragged the body out of view Vincent opened the door, “Hi I’m Sandeep’s friend Gopi, Where is Sandeep he asked me to meet him here?” he asked

“Sandeep said he needed to get something from the car, he didn’t get back, probably still there. Why don’t you look for him in the car?” asked Niketh.

But Gopi didn’t believe them and asked them if Sandeep had mentioned what he was going to get. By this time Nikhil and Surya had hidden the body and were on the way back when they looked at the portrait of three men but now it had only two men. Gopi was about to leave but he saw some blood on the floor and the nervous look on all of them, he got suspicious and went in to take a look at the blood.

“Could you all explain the blood on the floor?” he asked, all of them were scared, clueless of what to say.

Niketh started to say something when Gopi reached for his gun, pointed at them and claimed to shoot all of them if they didn’t show him where Sandeep was. Niketh went forward and started to console him by saying “Hey look I will explain everything but first you have to put down the gun, calm down and listen” but Gopi was in no mood to listen to any of that “Show me Sandeep. What have you done with him or I would shoot all of you “saying so he shot nearly missing NIketh, who panicked and reached for his gun to stop him from shooting again, but the same thing happened as it did with Sandeep, Gopi got shot and he died. As all of this was happening Nikhil and Surya who were near the portrait noticed that it now had only one man in it.

This was getting stranger and stranger with each passing minute, they were scared and didn’t know what to do.

“ this is not right, it can’t be this way” said Surya, “what did you do with Sandeep’s body” asked Vincent as he ran towards the room they took Saneep’s body to but only to find nothing there.

” There is nothing here” he exclaimed and all of them ran towards the room, there really was nothing. It was strange, that’s when Nikhil tried to tell them about the portrait which had three men and now it had only one man. Unable to process the things that went on they returned back to the main hall, only to find Gopi’s body vanished and there was no sign of blood anywhere. It was as if nothing happened, as if it was all just a bad dream.

But they realised that there was still one more to come as the portrait has another man, so they were waiting for the last one and this time they decided to ask him about all of this that’s going on. That’s when the doorbell rang, Surya turned to the portrait it remained unchanged, there was only one man in it, the person who came now didn’t introduce himself instead barged in shouting “who are all of you and what are you doing in my house?”

“Drop the act and tell us what’s going on” asked Surya.

The guy smiled and started his story knowing well that they had found out about the portrait “Well I’m Karthik, I rented this place along with my friends whom you have killed already. We just wanted a weekend getaway and this house was surprisingly cheap, we didn’t know why back then and we assumed someone must have died or something which didn’t bother us much. It was good until I found a tightly wrapped thing safely hidden under the cupboard, I wouldn’t have found it if I hadn’t stepped on something and fell down on the floor. It was strange we couldn’t open it as it was locked with chains bound all over it but our curiosity grew and we somehow broke the lock took out the chains and saw the portrait, hung it on the wall and you people are well familiar with what follows aren’t you?”.

After hearing all of this the one question came to all of their minds which Vincent asked “So the only way out is that you have to die?” to which he got an even scarier answer “Not only should I die I would also have to give my place to someone else” after finishing this sentence he grabbed Nikhil’s hands using which he strangled himself to death. The deed was complete the portrait was empty uncomfortable with the recent events they decided to just leave the place but they couldn’t. They were unable to step out of the house, they couldn’t get out no matter what they tried.

They had another idea, if the portrait was responsible for all of this destroying that would set them free so they did that, but it was unbreakable they even tried burning it but it was of no use.

Finally after trying for long they gave up, Vincent decided to call his friend who lent him the mansion. The phone rang but the sound came from within the mansion, following the sound they found the phone lying on the floor. Surya picked it up and searched the phone to see if he could find anything in it. The phone had a picture of four friends Sandeep, Karthik, Gopi and the other person whom Vincent knew as Srinath, who had lent him the keys.

They went back to the main room only to find the portrait hung on the wall without a scratch and there were three men on it Nikhil, Surya, Niketh. None of them can leave the house, they are not alive but they can’t go anywhere either. Vincent had the keys until he gave them to someone else he and the others are bound to stay in the same mansion.