You are here: Home / Suspense and Thriller / In A Heartbeat 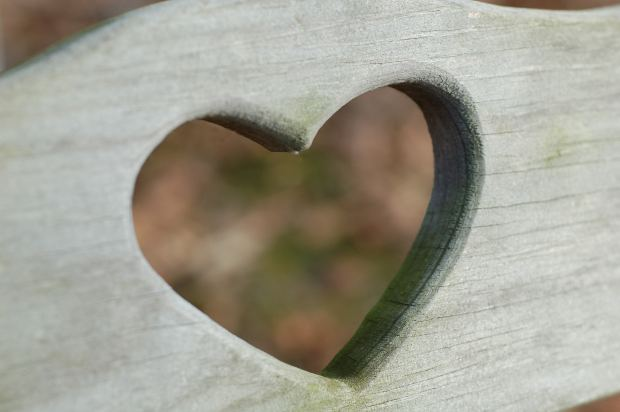 I sat on my chair at the precinct and reached out to take the Styrofoam coffee cup that was on the table. The coffee had spilled a while ago, and there was a dark brown smudge on the corner of a sheet of paper.

“What’s new, Jay?” asked my partner Claire from the other side of the table. Her fingers were tapping her police badge in a steady rhythm, and her black hair was styled simple.

I shrugged, which mostly makes people nervous. I’m a pretty big guy, and I usually intimidate people just by looking at them. I’d never had to use my gun on a perp before. But most cops haven’t, so that’s not much of a statistic, I guess. I sipped the coffee and tried my best not to look disgusted.

“Who’s the kid on the chair?” I asked, pointing behind her. She turned to look. The boy sitting in the chair couldn’t have been older than seventeen. He wore a skullcap over dirty blond hair, and he had a cut lip. He’d also been cuffed to the chair.

“Oh, him,” she said. She rolled her eyes and turned to face me.

“Unis found the body of a Jane Doe in a dumpster a couple of days ago. Raped and beaten. Real bad. We passed the news on the streets and a couple of pictures, and this guy turned up. He ID’d the body straight away. It was his sister.” She paused and sipped her coffee again.

I felt an unbridled anger rising up my chest, but I kept quiet. Claire hated it when I took work personal. She never blamed me, but the look in her eyes always made me cringe. I called it the Evil Eye.

“Why did they cuff him to the chair? Don’t tell me he’s the suspect?” I asked.

“No, they found the suspect alright. Ex-boyfriend.” She said and one side of her mouth twisted upward. I took that to mean she didn’t think much of him.

“I’m trying to tell you, Jay, but you keep cutting me off,” she said, sounding cross. I could feel the Evil Eye coming, so I held a hand up in apology.

“So we sent out a couple of officers to bring the guy in, and this skinny little kid tries to jump him. He almost broke his neck too, right in the middle of the precinct. A couple of the officers managed to hold him back and cuffed him to the chair. Serves him right too,” she said and looked at the kid again. I followed her gaze. The kid looked sullen, and kept rubbing the corner of his eye with a shoulder. He wanted to cry, but he wasn’t doing a great job of trying not to.

“What’s the captain saying?” I asked. “Is he going to charge the kid?”

Claire rolled her eyes again. “He says he’ll let the kid go if he apologizes sincerely.” She snorted derisively, as though apologies were meaningless.

“I’ll go talk to him,” I said, rising out of my chair. I kept the half-drunk coffee cup on the table and went around it. Claire’s eyes narrowed, but I didn’t look at her. I dragged a chair in front of him and looked him in the eye.

“Hey,” I said, trying to keep it light. The kid took a look at me, sized me up, and resumed staring down. I kind of appreciated him for that – not backing down. Full grown men look at me with mouths agape and legs trembling.

“Did they send you to read me my rights?” he asked sullenly. I was a little surprised that he had a deep voice. Almost a baritone. I was expecting a high-pitched one.

“Nope, I’m just supposed to give you the talk,” I said, dragging my chair a little closer to him. He looked at me again, and I didn’t see fear in his pale blue eyes.

“You’re going to say that I’m supposed to apologize to the captain, and he’ll let me go. But I won’t. Because I’m not sorry for what I did. Eric killed her, I know he did.”

This kid was going to be troublesome. I supposed Eric was the name of the boyfriend. I tried to sound logical, but it probably came out cold and ruthless.

“You’ve got no proof that he did it.” I said slowly.

I made a fist and tried not lose my head. Anger isn’t going to work here, I told myself.

“He raped her too,” he said, and his voice was small. His eyes stared resolutely at his lean hands, and then a fat teardrop fell on his fingers. I moved closer so that nobody else would see.

“Sometimes, he’d come to our house. Usually alone, other times with a couple of others. He’d wait till he was good and drunk, and he’d… he’d do.. stuff to her. He’d made the others join too. My sister tried her best to keep quiet, for my sake. But sometimes, I could hear the screams in my room.”

The kid was sobbing harder now, and his body was wracked by shivers. I wrapped a giant arm around him and held him there, while my other hand was squeezed around my chair’s leg rest. The veins in my arm were throbbing as I tried to keep my anger down. I held the boy close as tears streaked my uniform and fell on my lap. I tried not to mind that nearly everyone in the precinct was looking at us. Claire was probably staring daggers at my back.

There was a BANG, as the interrogation room snapped open. A lawyer in a stiff suit walked out a couple of sullen-faced officers who escorted a guy with them. The guy was thickset, with huge forearms that had wild tattoos on them. He had a scar over one eye, and he was talking to the lawyer in front with a grin on his face.

“You’re letting him go?” asked Claire from behind me.

The lawyer turned around with a small sneer on his pockmarked face.

“My client has an alibi for the time of the murder. It has been confirmed and verified.”

The ex-boyfriend turned around and spotted the kid with me. His face broke into an evil grin again and he walked up to us. The kid tried to stand up fast, but his cuffs caught the chair and he was pulled back. The man guffawed.

“I’m going to ask you to move, sir,” I said softly. I’d long learned that loud noises and extravagant gestures rarely worked with most people. A big man speaking in a soft and firm voice? People tripped over themselves trying to obey you. This guy was no exception.

He took a couple of steps back and looked at me with a sneer on his face.

“I just wanted to comfort the kid, officer. I wanted to share my sorrow, you see,” he said, still smiling to my face. I kept my fists by my side, trying to keep my anger in check. The last thing I wanted to do was let Claire kill me.

He swaggered past me and bent down. The kid watched him with a mixture of loathing and anger. He was trembling so much that the chair was shaking. The man’s mouth reached the kid’s ear, and he spoke in a whisper that only the kid and I could hear.

“Your sister was tasty.”

My fists clenched and unclenched. I felt something explode in the pit of my stomach as I started to wind my right arm. But suddenly, there was a hand on my leg.

“Don’t, officer,” said the kid, his voice impossibly soft. “He isn’t worth it.”

Blood was pounding my ears as the guy turned and walked away. He put an arm around the lawyer’s shoulder and strode out the door. There was a moment’s silence in the precinct, and then everybody went on their way. Another day, another criminal walked out of the door.

“Take me to your captain, Officer,” said the kid. He was looking up at me, and he was smiling. His eyes shone with a new light. He wasn’t trembling anymore, and he was looking me in the eye. I took him to the captain, and listened to him say that he was sorry to have attacked his sister’s killer. He vowed it would never happen again. He agreed that it was a mistake, and that the man was innocent. The captain nodded sagely as he listened to him. Finally, he let the kid go.

I walked the kid to the door, staying in step with him. We walked in silence, both knowing what the man had whispered to him. I made no notion to discuss it, and neither did he. We reached the iron gates of the precinct, and I opened them for him.

He nodded slowly and walked out. His hands were in his pockets, and there was a slight sadness to him. I turned to go back.

“Say, officer,” he said. I stopped in my tracks, but I didn’t turn around.

“Say this happened to your sister. Say the man who killed her went scot free, right before your eyes. Is that justice? Tell me, from the bottom of your heart. Is it right that my sister should lie cold and mutilated on a slab while that monster roams free?”

I have to tell him that justice would be done, I thought.

I have to tell him that sometimes, the bad guys get away.

“If you could see justice delivered… would you?” he asked me again.

“In a heartbeat,” I heard myself say.

I didn’t see it, but I think he nodded.

Two days later, we received news that the ex-boyfriend had been found dead in an alley. It looked like he had been burned alive. I sipped my coffee and tried to ignore Claire’s Evil Eye.