You are here: Home / Suspense and Thriller / SHASHANK 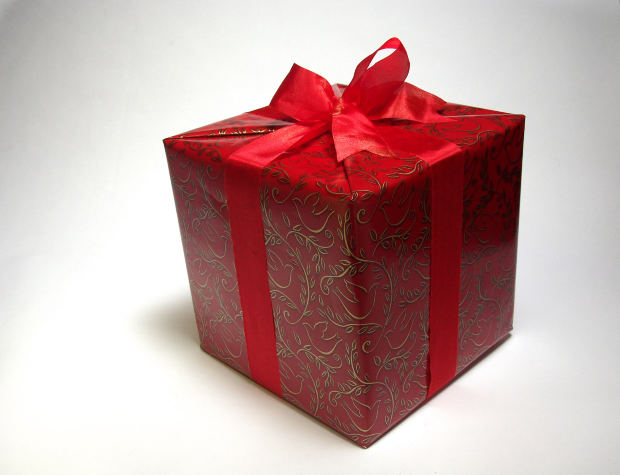 The late evening winter breeze was feeling different today. Shashank was on his way home after days work. It was just another December evening of kolkata. The crowded streets of esplanade was as usually illuminated.

Pedestrians crowded the footpath and vehicles from four directions were running towards their destination. Shashank was slowly strolling towards bus stand when among the crowded street of melange fair of vehicles a red sedan crossed him and stopped few steps ahead oh him.

The car didnt caught his attention and shashank in his own momentum crossed the car when a very familiar voice called him by his name from behind. With a quick reflex as he glanced backwards a stranger slowly peeped out of the car window.

But strangely though the voice sounded familiar to him shashank couldn’t recognize the person. “aren’t you shashank sir” the stranger addressed him.

Shashank tried to recall the person but he was pretty much sure that he had no sort of concord with the person prior to this.

Hesitantly he approached the stranger in the red sedan. The white bearded person in red shirt and one vintage specs over his nose was in his late fifties. Before Shashank could confirm his identity to the stranger the mysterious person introduced himself. “Sorry to disturb you sir. Myself Nick from MYRA delivery services i have a package to deliver you,actually i intended to visit your office but when i reached you had already left. Came to know from your peon that you left a minute ago and came this way”. Nick narrated all in one breath and paused as if he had rehearsed the same version multiple times before addressing Shashank.

Shashank was perplexed by the situation unable to react initially now got a chance he clear some doubts. “Okay i understand” he said “but how did you recognize me”.

With a joyous smile the so called boogeyman replied “our database also have your picture with other details sir. I admit in such a busy street like this finding out a person just on basis of a passport sized photograph is something like searching a needle out of a haystack. But sir luckily i did it”.

It doesn’t needs to be mentioned anyone in shashank’s place would have found the entire matter very fishy. But Nick’s smile had something by which no one could remotely believe that this stranger can be harmful by any means.

“Sorry to waste your valuable time sir” Nick started again slowly handing over a red parcel to Shashank in a gesture briefly which can be described as a presenting a gift. Shashank signed the receipt slip and was about to proceed in his own way. When Nick called him back again “Sir a gift is something which all does long for but all of them are not always worthy of their gift. But trust me sir wisdom has great power in it is the only thing that brings realization and makes an unworthy person worthy”

Shashank hardly had any idea as to why Nick said him such a thing. Nick rushed away with his car which had white horse tattoed all over it.

The impact of had small encounter with he strange delivery person left Shashank occupied for rest of the evening. Shashank a single person in his early thirties.

He lived in a small apartment to the north of the city. On reaching home he some how hurriedly closed the door without looking at the switchboard he switched on few switches to put the light on.throwing away his bag aside he kept the parcel on a table and started to unpack it. His curiosity was killing him from inside. It was a pipe like case clearly a container to a bottle or some beverage. He gently opened the cap of the container a greenish champagne like bottle was there inside.

But to his dismay more surprises was left for him that evening.

The bottle was sealed but the content was almost empty a half liter sized bottle labeled as Plouti had a liquid content of merely 30ml. Shashank disgusted with the entire thing was about to dump it in trash but again a subconscious curiosity did hold him back.

After all curiosity is something that will always keep on tempting human being. What is it?. Is is poison?, Some pill? whatever it is but it is very much unlikely that Nick a completely unknown person will take such strain to make a joke out of Shashank just for fun.

He decided to keep patience for few more minutes and poured the content in a glass. As soon as he opened the bottle aroma of pineapple filled the room. The drink was purple in color and undoubtedly tempting. Shashank hesitantly sipped out of it just to check out whether its edible or not.

Not only edible it was simply out of the world. He sipped a bit more. “No” wasting it will be wasting a big opportunity that life has offered him Shashank thought unaware of all his doubts,anxiety about the drink finished it in one sip.

The ringing of the cell phone broke the sound sleep that shashank was having. He reached for the phone lethargically. His CEO was there on the other side. “Shashank i have a bad news and a good news for you simultaneously”.

“Good morning Sir but is there something wrong” he replied.

” No not much, Mr Gupta resigned yesterday evening so i have decided that you should take his place as General Manager”.

” sure sir thanks”. The phone cut off from the other side.

Shashank sat idle on his bed for a minute trying to cope up with the situation. Sunita must be informed about this. She would be happy more than ever. Sunita was not being able to bring the issue of their marriage to her dad because of Shashank’s salary scale. He was thinking how Sunita would react on hearing this when his phone rang again.

“OHH MYY Goddd” he exclaimed it was Sunita over the phone.

“Shashu i told dad about us last night”. Okay there was a brief pause. Shashank broke he pause and said “yes tell me what happened your silence is killing me”.

Sunita now breaking the silence joyfully screamed “he is okay with it, Shashu i cant believe. He has called for you today evening please please don’t be late”.

Shashank said “yes i also have something to tell you see you in the evening dear”.

Emotions were flowing beyond boundaries he couldn’t  believe things will go right so easily and so fast. Shashank totally forgot about yesterdays incident. He went to the kitchen to get some coffee.

It was Christmas Day. He took the newspaper from the balcony. Sipping on his coffee started reading the article about christmas. A small column was also there to the right side of the page with heading.

“WHO WAS SANTA.” Santa who brings not only joy and happiness but also luck and prosperity in disguise of a old bearded man in red. Was originally called Saint Nicholas. Wherever Santa steps down he brings “PLOUTI”(Greek word for fortune). That is what Santa is historically known as Saint Nicholas or Saint Nick”

Shashank felt a chill running down his spine three words were running through his mind “NICK”,”PLOUTI”,”FORTUNE”, “NICK” ,”FORTUNE”, “PLOUTI”.

He ran towards the shelve where he had kept the empty bottle last night.

The last surprise was left for him there.

The bottle was not there.

Instead there was a paper written on it.