You are here: Home / Suspense and Thriller / Clureed 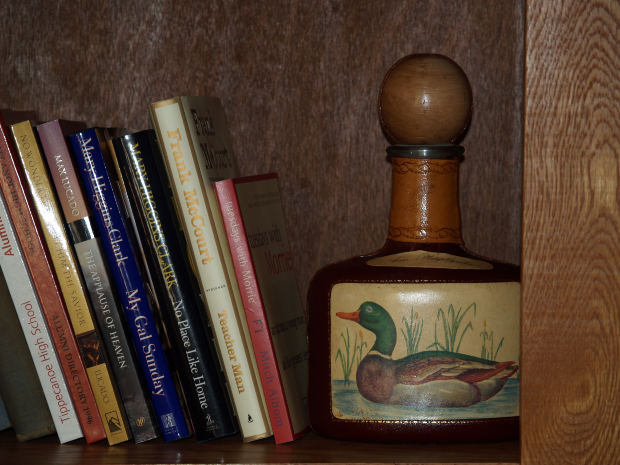 Yora Psesht is escorted into the courtroom to testify as final witness to a robbery/murder.

“Raise your right hand” says the court clerk, “Yora Psesht do, do wait, is your name really  Yora Psesht?”

“Yes sir, Yora Psesht, I’m just visiting here from Uranus” replies Yora as the Judge chokes on a drink of water and slams his gavel to his desk, BAM!

“Mr. Ps aaa I mean,hmmm, Yora do you solemnly swear to tell the whole truth and nothing but the truth so help
you God.”

“Yes I do” answers Yora as the Judge falls back in his chair clutching his head with both hands, Yora takes a seat in the witness booth.

Then with a sigh the Judge adds, “I would like this to go on record that I told everybody in this courtroom do not, I repeat do not squeeze the Charmin.”

“Yes sir,”answers Yora, “I stopped by S-mart to get a home-made pie, ice cream and a coke when two bananas came into the store and shot the pea working behind the counter, there was pea everywhere, I hid in the newspaper rack, it seemed like a safe place with the pea all over the place, I watched them take the money and peel out of there.”

“Hmmm,” says the defense attorney with a sideways look, “have you ever owned a dog.”

“I object” screams the prosecuting attorney, “what does that have to do with this case?”

“No more questions your Honor,” replies the defense attorney as he sits down looking away from an angry face on the Judge. The Judge then informs the prosecuting attorney he may question the witness. The prosecuting
attorney rises and limps to the front of his desk asking, “are the two bananas you observed at S-mart 1415 3rd and Pike in this courtroom today?”

“They sure look like the two bananas I seen that night, but it seems like they both changed their stickers around, that one should have the dole and that one the Chiquita sticker.” answers Yora nodding his head.

“No more questions your Honor, we rest our case,” says the prosecuting attorney returning to his chair.

“All the evidence has been heard” replies the Judge, “You may step down from the witness stand and wait to be escorted out of the courtroom.”

Then a blinding light came down from above, entrapping Yora and when the light disappeared Yora was gone too. Silence filled the courtroom and the defense attorney cries out, “I object your Honor, was that witness real,
was that some trick of the prosecuting attorney to convict my two clients. I demand a miss trial.”

The Judge in utter confusion looks around the court and says, “I seen it with my own eyes, your demand will be presented to the supreme court, court is dismissed.”

Two weeks latter the two bananas are found in the desert, according to the coroners report both were skinned alive and shot multiple times with a potato gun. If you have any information on this crime please contact 1-800-THE-END?