You are here: Home / Suspense and Thriller / The Lottery Murder (Part 6): Mrs. Parks 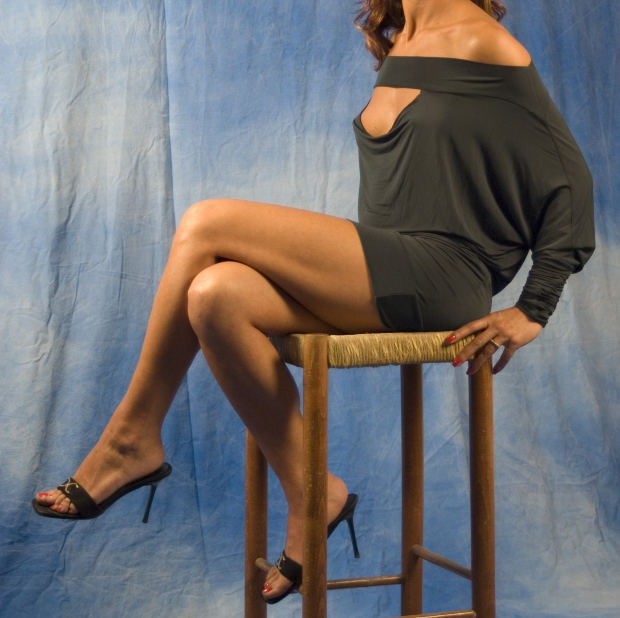 “She was always looking at herself in the mirror and taking pictures of herself. She said the right kind of smile and tilt of the head, the right first impression, could say anything. She showed me one picture of her, dolled up all fancy, not a hair out place. Her smile appeared casual, but a mother knows. She was happy with herself, with the premediated pose, it came off as a thoughtless grin, as one in an endless series of laughs and smiles that fills a happy childhood.

“She knew who she was, how everyone in this town and in the world would judge her. White trash, good for a bone but not to take home. And she hated me for it, for ending up in this dump, or for this place turning into a dump around us. She understood hard knocks, that it wasn’t all my fault, but she couldn’t help hating me anyway. A sharp guy like you, you have me sized up already. My speech is too good to be from around here, I don’t have that washed up, inbred look you saw on almost everyone in town.”

“Did you see the poor girl who works at the gas station down the road? Most people have to stop there to ask for directions, the layout of the town is confusing, it’s difficult to get around for strangers, despite the fact that it’s so small. That poor girl, I doubt that she knows more math than it takes to run the register. she’s the type that would need a map to wipe her own asshole if she cared enough to do so correctly.”

“I picked up a lot of the more colorful colloquialisms over the years. Not that there’s much to talk about or many people to talk to, but enough years pass and you can’t help it, a place becomes a part of you. You probably noticed some of the burned down buildings as you’re coming off the interstate and some of the other broken down old houses and buildings near the old town center. Liberty was always a hole, a gas station and a diner on the way to the city that some cheap fools were stupid enough to build houses around, but it wasn’t always this bad.

“Even when Lana was growing up, it wasn’t as bad as it is today. The only movie theater in town shut down five or six years ago, you probably noticed the posters for “Mr. & Mrs. Smith” that were still up, what a great way for a theater to go out. Lana used to stare at those pictures, at Angelina Jolie and Brad Pitt. This was just before she left, she was near 30 and thought she was grown up but she was still a child.”

“She was always clever and manipulative, but more naive than she realized. She knew she was naive, uncultivated, unsophisticated, and she hated herself for it, but she didn’t realize just how naive she was. It wasn’t her fault, being sheltered in this town her entire life. She didn’t realize how big and evil the world could be. The nastiness of the world ended with her imagination. She was no angel and like I said before, she was no dummy, but only so much can grow out of a pile of shit. A crude saying and technically not accurate, but you know what I mean.”

“You don’t ask a lot of questions and know better than to interrupt, whether out of politeness or intelligence or both. You’re more successful than you know, moving up faster than you know. I see you trying not to smile, “what does some old hick from Nowhere, USA know about anything?” But you tried not to smile, you have good instincts. Or maybe you knew that I’d find it charming.”

Mrs. Parks smiled, moved to the refrigerator and removed two Budweisers. “This is the classiest stuff we have around here, and even drinking this can get you a reputation as a snob.”

She popped the caps off the beers with a lighter, lit a cigarette and offered Harris one, which he accepted. He didn’t usually smoke but figured with the heat and the dust a cold beer and a cigarette would do him some good, and it would be rude to let a lady drink alone, turn down what little hospitality she could offer. He thought to himself that he was already picking up some of Collins’ bad habits and excuses.

“About Lana, the murder, the whole sack of hammers? That’s how we refer to a big, cumbersome mess around here, and as you can see we have a lot of them. Obviously, I think Lana got in over her head. I don’t figure Collins for a murderer, I doubt anyone does, but in a way that would make him the perfect murderer, wouldn’t it? But I’m sure your big city lawyers and detectives stay away from this circular kind of thinking. Being aware of it is enough, analyzing it is just a waste of time. In any case, I don’t think he did it. I think this is just another typical murder, small town girl goes into the big city and gets more than she bargained for, but Lana was a pretty girl, and with Collins winning the lottery, it became a story the papers could latch on to. In the end it’ll turn out some thug killed her, or it won’t be solved at all. It’ll all be forgotten about once the next big murder story comes along.”

There was no mistaking that Mrs. Parks was intelligent and had come from a family of some education and breeding. But she was still an old woman who likely grew up in a town not much bigger than this one. She was a bit of a snob like her daughter, and snobbishness and pretension became habits. People tended to try to cover or hide whatever aspects of themselves they felt ashamed or uncertain about, regardless of rhyme or reason. And Mrs. Parks was still a woman, or a human, after all. It was a hot, dusty day and it was unlikely that Mrs. Parks had spoken to anyone for this long in several years.

“Liberty was always a dump. A rest stop between better places. But in recent years, it was almost like god himself turned against us. All the fires, the movie theater going out of business. And did you see the typewriter repair shop on Main Street? That’s the only open business in the entire town, aside from the Stop and Shop and the Dunkin Donuts. I doubt that more than half a dozen people in this town know how to read, let alone write or type. I just don’t get this town, it’s like some damned anachronism. Maybe god decided it was time for all of it to go but got distracted halfway through, just like almost everyone else in this town.”

Harris gave Mrs. Parks a business card more out of courtesy or pity than anything else and thanked her for the Budweiser. He would be back the next morning to look through some of Lana’s personal effects if Mrs. Parks didn’t mind, which of course she didn’t. Harris’s firm already had copies of all of the Parks’ civil records and financials from the lease to the latest electrical bill, but Harris reassured Mrs. Parks that they would go through whatever records she could dig up, again, more as a courtesy than anything else. And whatever the odds were against it, there was no harm in making a friend out of a potential witness.