You are here: Home / Suspense and Thriller / The Power Misused… 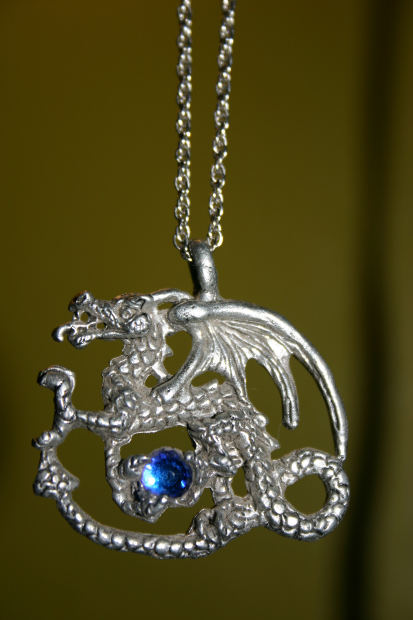 Ashok  Sangwan , a final year mechanical engineering student, resident of Mumbai.
He lives with his parents and elder brother  Avinash , who was engaged to Sunita, and after 6  months they will tie a knot of marriage.
At one side, every one in the family was happy  for their elder son, but on other side Ashok was bearing an untold story in his heart.
Ashok recently had a breakup with his girlfriend Malini. They both were in relationship from last 14 months but 3 days back she dump Ashok.
And No one in the family knew about it .

Ashok  started staying alone and went into depression , at this moment he don’t like anything, Only thing he now wanted was just to be alone .
He loved Malini very much, but she didn’t even call him once after  the  break up. Ashok want to overcome this depression  as early as possible.

His  college was about 45 km away from main city , Surrounded by hills, mountain and farm fields .
One day he bunked his college and headed towards a hill which was around 2 km away from his college. He started off alone, informed to none.

After crossing 3 farm fields he reached near the hillock  . He saw a temple on top of it.  Decide to explore more on it , he started climbing the hill. After 40 minutes he managed to reach on the top . He could able to see his college from there  . He went inside the temple and offered his prayers.

After doing that he sat calmly on a rock . Something  shimmer near to him, he noticed a locket lying in front of him.  He kept the locket in his jeans pocket without putting much attention on it . After spending some time there , he then decided to move to his college and from there to home.

After reaching home , In the  evening he tell me himself ” Let bygones be bygones , How long will I be carrying the tag of  ‘failed in love’  ?, I must start a fresh.”
He took a deep breathe and then gathered all the gifts and letter which once Malini gave to him , he set all of them to fire.
“Why I should cry for her  ..  She  left me …. it was her loss not mine”  – he said to himself.
He then took out his phone and Deleted Malini’ s contact number as well.

From next day he started his life on regular pace,  began to focus on his academics .

After 7 days, he came to know that  “Malini died in an accident “….

This came as a shock to him. But, he remained calm and composed. ” Destiny did this to her .. She dump me and now she is no more …May be she has to go in this way ? ” .
Ashok remain unaffected by her  death. He was completely changed now.

Days passed by and he  completed his graduation in first class . Now the task for Job Search began.
Mr Abdul Hamed, a placement agency co-coordinator asked for  12000 /- from Ashok and promised him  a job in a reputed MNC.
Ashok managed the amount from his elder brother Avinash and gave to Abdul.
After 2 days , he came to know that placement agency was shut down over a night and Abdul Hamed ran away with all the money  .He cheated almost 71 students .
Feeling dejected once again , Ashok  deleted  Abdul Hammed number  from his phone in anger.

After 7 days, he came to know from one of his friend that Abdul hamed found dead  in a hotel lobby in Andheri West area.This time some thing clicked to Ashok.  He sat and recollected all  the incidence happened to him from last 2 months

He murmured:- “Malini left me .. and I deleted her number .. after 7 days she died in an accident,Abdul hammed cheated me and I deleted his number from my cell and exactly after 7 days he found dead in hotel lobby…Is there any meaning or it’s just a coincidence ?” , He began asking this to himself.

Just to try once , he intentionally want to delete a number from his cell to confirm the consequence. This time he deleted phone number of  Prashant, a boy Ashok  never liked at all from his  college days.

Now, he waited anxiously , and on 7th day .. he received a call from his friend Ayaan stating
” Hello Ashok.. come soon to CMR Hospital.. Prashant fell down from terrace .. his condition is critical…come fast”..

By the time Ashok reach the hospital , Prashant was dead.

Ashok now understood that ‘This is just can’t be a coincidence. This is some sort of power bestowed by God to him..”

His mind now started playing tricks.. He delete all those number whom he didn’t like. Slowly, one by one he deleted number of all his  old enemies, people who never trusted him, who abuses him, and who never supported him .
He found this fascinating as no one would  ever come to know the  person behind these death as they happened with obvious reasons like accident, fall from stairs/building etc..

He now began to realize the Power he posses . He can finish any person on earth without anyone pointing finger  at him . He was happy to know he is an ultimate killer who can’t be arrested by police..

To the surprise, In span of 45 days, he deleted 15 phone numbers which means  he indirectly killed 15 people.

But everything which reach to threshold have to come down. One day, When Ashok  was trying to delete a number of his enemy, he by mistake deletes his elder brother phone number from his cell.

“Oh God,  What I have done ??, I deleted my own brother’s number by mistake who is going to marry in next couple of months.” – he realized.

He become tense and felt panic because he knows as per this proven fact that what ever number he delete from his cell that person dies on 7th day .

He cried for  what he has done. Now he also realized that he killed so many people just for fun .
He could have used this power to help human kind. he could have deleted phone number of those who are menace in the society , who do all wrong to poor people.

Deep in his thoughts , he began to explore and realized  that this power came to him after he visited the temple on hill near to his college. He now began to understand  that the locket which he found and brought home could be the source of this unusual power.
He immediately ran and  took out the locked  from his pocket  and looked at it closely.
This was a locket of lord Shiva , who is also considered as a “God of destruction”.

Ashok cried whole night for the fear of losing his brother on 7th day from now. He also realized about the deaths he caused till date , Except for malini and abdul , he deleted all the other number intentionally. He now decided to go back to same temple and drop this locket out there.

Next day early in the morning he started for this college . After parking his bike at Parking stand he immediately  rush towards that hill.After some time he reached to top of the hillock.
” You have done enough deaths and when it came to your elder brothe , you realised your mistake. Right ?”  An old saint said .

“Yes Baba.. but how you know about this all ” ? Ashok questioned

“I know everything, I  know you found a locket and after this all started..” – Saint replied

“Is there any way by which I can stop this.. I deleted my brother’s number and in couple of month his marriage is there,  my one mistake will hamper many lives “….   Ashok cried..

“See what you have done can’t be changed … but there is one way to stop your brother’s death..”- Saint quoted

“But Baba, I have my mother, father, brother and no one else in my family… I even can’t make any choice ”

“Then you can see your  brother dying .. You deleted a number and it means 1 death…for sure.. Now no one can change it”

After this conversation Ashok  returned back to home. Still he was tensed and panic. Whole Night he spend thinking on same .. and finally found  a solution ..When only half an hour left on start of 7th Day. He framed a note and left it on a table ..

” I suffered love loss in my life. I remained silent and alone. One day I went to a temple near my college . I found a locket there which I carried with me. I know no one will believe me what I am stating in this letter,  but fact is that I had a power by which If I delete any phone number from my cell then that particular person dies on 7th day  to follow.

I used my power in wrong way  and last week by mistake I deleted Bhaiya’s number. I then realised my mistake
One saint suggested  me a solution to keep my brother alive. For this I need to delete any other number  of a  family member to replace him , which again I can’t do .
So Now to keep bhaiya alive and to wash away all my sins , I deleted my number from my cell.. This is unusual, but true incidence I witness , by the time you receive   this letter it will be too late…………..”