You are here: Home / Suspense and Thriller / Wednesday 9pm 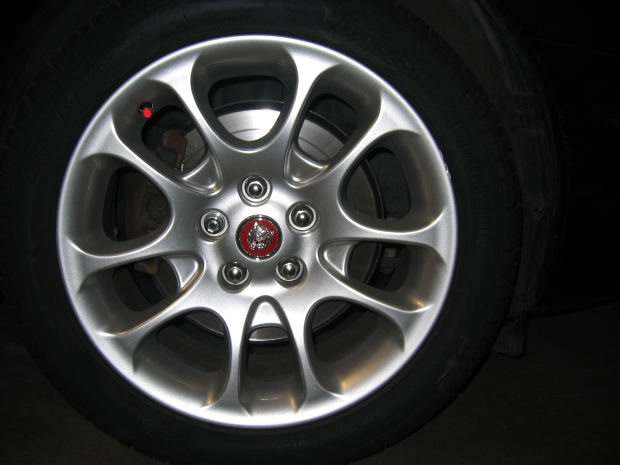 Wednesdays  for me are always  tough and  grinding.

Be it my work or my schedule, I end up having a banging head and crushed body at the end of day.
This has been with me ever since I joined  glowing I.T. sector  after a  long nap of  sleepy years in government sector.
Today is nothing different either, as it is  Wednesday.

There are two kind of people I come across daily. One who are all healthy and all bubbling[ I am not sure what they eat and what they do to project their persona in such a  delicately beautiful and exotic manner];  And other ones , like me, strained, filtered and drained at the end of each day.

When I see people coming back to office to keep the cricket kits at their desk and then sign off, I pity myself  sitting in front of the lifeless humming machine called laptop.

Many a times I wonder whether I live with laptop more number of hours than with my humble wife out there waiting for me. I do not wish to decide on this as I already have enough list of  complaints on me for being workaholic.

Even when I wish to declare I don’t want to work, my vocal chords misbehave with me and my voice never comes out to say so !

It is almost  8.45 pm and  most of the cubicles are empty with fans running in full speed and tube lights lighting the room as if it is Deepawali day..one of the poor security person is trying to estimate how many of the employees are still sticking to their chairs and slowly putting off one after another fans and lights.

I just stuffed most of my belongings into the bag , laptop, power chord, wireless mouse, notebook, set of pen and pencil, printouts taken for possible presentation preparation at home [ provided Neetu, my wife allows me to power on my second love, laptop]

My dull walk may have amused the security guy and he may be wondering why this forty plus guy is present amidst sub 25 aged youngsters …I don’t have answer man, it is life, I wanted to shout at him, but observed him to be silent and found out him to be actually  smiling at the funny sms he was reading secretly.

It took almost 10 minutes to reach my car and further 5 minutes to decide which route I should take to my home.

I can reach my home through two routes, one route which takes me to the Sebastian church and then I need to take a right turn. Most of this route passes through village area and almost full route is not lighted properly .

Another route being the highway corridor where in I need to pay charge to pass though the road.

I finally wanted to save the toll-gate charge and geared up my vehicle to the rough terrain village route. I think I did a mistake by deciding this route, but I was already determined to proceed and my brain didn’t wanted to work for the comparative study or routes in the late office hours of 9 pm …of  Wednesday.

I am not  sure  why people say, when trouble arrives it arrives in family …..like  5 to 6 relatives coming at once at your door step for a week’s stay… like   getting three to four  utility bills in one day …..I sensed my  car’s  front right wheel is creating a wobbling sound and my car was  shaking heavily and I found out I was loosing the control and sense of direction due to this.

It was pitch dark out there. I somehow managed to park near one of the Chai shops where very few human beings were available, busy in their own discussions.

I got down and came to know the pity state of affairs…my right front Tyre looked to be punctured.

Oh God ….!   I saw there was not a single  garage around and I remembered  one garage which is almost 5 km away from where I was standing.

It took fifteen minutes and lot of  sweating to change my Tyre with spare one. I was huffing with exhaustion and  somewhat felt  comforted when I realized I did good job.

While I was changing the Tyre, I observed one of the two persons sitting at Chai shop  got up and was trying to observe my activities from a distance.

I ignored him then.

Later when I was concentrating myself in tyre replacement, I recalled the dreadfulness of this route and the true stories being circulated in the office mailer list. Many of my  company co-leagues had written their true accounts of this route and most of them advised not to venture after 9 pm on this route until it is really an emergency situation.

A small amount of chill passed through my backbone from bottom up top to the head.
I noticed most of my colleagues who expressed their stories were bike riders and somehow I got consoled  as my case was completely different  compared to them.

Car is  more safer.
But how much time it takes to break open the window ? Car can be easily damaged making me to stop at short notice ….

There were also stories where in rotten egg is splattered on the dashboard glass and it makes you impossible to drive due to low or no visibility…..

Why I am thinking all this now….?  Just complete the work and get in….

I put the punctured tyre inside and in the meantime informed Neetu about my late arrival due to puncture and got into the car….oooof relieved… as I felt higher degree of safety  inside.

I saw two men getting up from their Chai bench when I revved my car to full throttle where in my tyres left a distinct colour on the road due to sudden surge of speed.

I casually or more instinctively watched my rear view mirror of left side and I saw which I wanted to avoid.They were in a hurry to get on their bike and speed up …..probably to catch me.

I pumped more fuel by accelerating my machine…I was going at a speed of 60 kmph in a village route… which was more dangerous as many a times  gods[children]  of  age between 7 to 12  found to be roaming on the roads with reduced underwear which made the road more funny and equally dangerous.

Gods are free to roam around and none of the safety laws are applicable to them.

I saw a black  shiny she-buffalo walking majestically on the road and she was in no mood to change her course of  after dinner walk. She was almost 500 meters away from me and I had to reduce my speed.

Again I saw the bike coming at high speed , now more nearer to me.

My car flung up at  height of almost 3 feet and then I observed that a nice and small road hump had tried to play with my vehicle and my vehicle had obediently responded to it.

Now suddenly my distance from buffalo and the bike looked equal and small…..

I  heard a rattling sound coming from behind, something metallic sound….I just turned a bit to see what it is …
I didn’t get anything there ….I saw the bike was not visible now ….means  they are gone or  …. they are now just behind my car from where the sound is generating ???

I slowed down a bit and  tried to navigate away from the buffalo, she was never bothered and was damn sure that car coming towards her is not having sufficient courage to knock her down , so she was more  contented and relishing what ever she had for her dinner by moving the jaws in a cyclic manner.

I could  avoid her and  stepped up my speed again. This time I saw the bikers in my right mirror and one of them was holding some shining object  which got reflected due to my hind lights.

But guns are normally black in colour and they don’t shine in dark…..then probably a metal pipe where in if I resist, they can try it on me like Ghajini…

no …why I am over thinking ? they may be just riding back to home… just like me …else probably they are up to something and they may have already damaged something at the back of my car which has started creating the metallic sounds..

yes it seems to be correct..

they are upto to something …

Then I saw faint colour of the bike….dark red  …dark brown…..it seemed to be same  bike  …

Around 2 months ago  one bike had  touched my car while taking a sharp curve and then biker had  argued unnecessarily and had resorted to improper language with me. Is it the same bike ?

But  I did not charge him anything and rather I had allowed him to bad mouth all his anger and kept myself cool and composed through out his spitting.

No it may be different bike…

But who are these people ? Why me ?

Somehow I felt   bikers to be just near to my car and  there they were riding exactly parallel to my car….person on the pavilion was showing some long metal  piece to me and  rider was with helmet, uttering something to his friend..
I thought them to talking

I did not hear them saying so …but my brain created a imagined voice talk.

I had no choice  but to stop….else my car would be at stake and I had to pay heavily for its repair later.

I  secretly checked my wallet and credit cards and just dropped them below the seat before stopping my car and reaching out to open the door.

Oh man  these are hard core criminals and  my day is done today ……god wherever you are please help me….
Helmet guy also got down and removed his helmet…. I don’t know him   so …..he is not that person  of other day ….somewhat relieved.

But  new problem is more dangerous than the known old problem…

“Hello Michael Schumacher of  India, what was the need to speed up so much, you  almost knocked that buffalo there …”

“Do you have your senses in proper place or not…”

“Anyway take this tool kit, which you left after replacing the punctured Tyre…I am trying to show your spanner so that you can remember why we are following you…”second man spoke to me and kept the kit in my hand, it was heavy on my trembling hands….he also gave away the spanner.

“Moreover  I must say you are such a lousy driver,  you are driving the car by keeping your Dikki door open all along….do you like the metal music very much ?”

Both were laughing when I was trying to thank them for returning my kit and making me aware of   me forgetting to close  the dikki door.

Afterall, all Wednesdays are not same …right…?