You are here: Home / Suspense and Thriller / Criminal Instinct 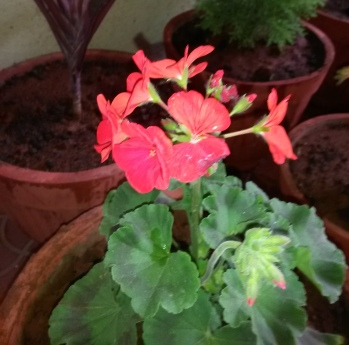 Ayesha’s college was a mere ten-minute walk from her home. Though it proved to be a boon on the days with gentle breeze and a benevolent sun not too intent on burning the very life out of the planet, on the other days it seemed more of a pain in the neck than a blessing.

It was a cool September afternoon, the leaves beginning their journey from green to brown. The golden hue of the environment coupled with a gentle, slightly cool yet comfortable wind and the warm sunlight created an aura of leisure and relaxation. Clad in a pair of jeans, dark pink sweatshirt with a silk white scarf around her neck, her mauve messenger bag slung loosely across her shoulders, Ayesha stood leaning against the tree. Her long black hair whipped around her face with the occasional gust of wind, obscuring her large grey eyes. She was tall, lithe with a proud, regal face, aquiline nose and aristocratic cheekbones. Her long fingers were now digging into her sleeves for warmth as her tongue clicked impatiently.

She was waiting someone.

And that someone was really, really late.

“Damn that Aditya!” she fumed, checking her watch for perhaps the twenty-seventh time in the last ten minutes.

“He was supposed to meet me at two…it’s almost two-thirty on the clock! Darn him and his promises!”

Aditya was her classmate and recently her project partner. For their Value and Ethics optional, they had write up a report on the local orphanage. The place they were supposed to visit today. She had wanted to get the visit done quickly, so she could jump in for some fun-time with her girl-pals. But as fate had it, Aditya was certainly being kink in her plans.

She sighed to herself, looking up at the foliage. The golden sunlight played hide-and-seek with her, casting a diffused light on her.

I swear I will never take up a project with that idiot.

When it was three, she decided to finally call it a day.

After typing in the text message and pressing the “Send” button with relish, she proceeded to call up her friend.

“Hey, is the afternoon plan on?” she asked.

“Yep…meet us at the ice-cream parlour.”

Ayesha stuffed her phone back in her pocket and proceeded to walk towards the shopping district. As such, she had till six to get back home—three hours of some girly fun wouldn’t harm anyone.

“Evening dear. How was college?”

“Same as usual. Aditya didn’t turn up. So the orphanage plan was drown the drain. Went out with some girl pals.”

Ayesha sunk into the living room armchair with a contended sigh. It was fun to just giggle away, immune from troubles for the time being. She ran through her mental schedule before rolling her eyes.

She felt her shoulders slump under the weight.

Who said it was easy to be a twenty-one-year old girl?

“Ayesha, have you seen Aditya around? He’s not picking up my phone nor replying my texts…”

Ayesha looked up from her computer screen to determine the speaker. It was Nishika, his girlfriend.

“Sorry, Nishi. In fact, he was my project partner and I have been mailing him like crazy…both to his e-mail address and to his cell phone. Did you check up with his landlady? As far as I know, he lives on his own.”

Nishika, a petite, slender girl with round topaz eyes, gave a tearful nod.

“I did. But the lady says he went out for some work three days back…and he explicitly said he shouldn’t be disturbed.”

Ayesha looked at her kindly.

“You know how impulsive he is. Maybe he found some good story and was hell-bent to check it out. You of all people should know how passionate he is about the Reporter’s Club.”

Nishika whimpered softly before walking away, leaving Ayesha stare at her retreating back.

“No, miss. He hadn’t left any means of contact. Just told me to hold fort until he came back.”

With that, the lady shut the door. Ayesha resumed her descent down the steps thoughtfully. Aditya had conveniently vanished from the face of the earth.

Three days later, police came to interrogate their class. Half of the class was thrilled at the opportunity, while the rest looked at their morbid satisfaction with distaste. Nishika, on the other hand, was a puddle of tears.

“Please…please…find him…” she managed to say.

Ayesha told the officer about the other day. How she waited on for like forever until she stomped away in frustration.

“He has never been a stickler for time, not since I can remember anyway,” she said with an indifferent shrug. The officer painstakingly noted down the point.

A month had passed away since Ayesha and her class last saw Aditya. His parents had been informed and a nationwide search was organized. The college wore a sombre look these days—after all, people just didn’t disappear out of the blue everyday.

October brought dropping mercury levels and shorter days. The sun wasn’t much accommodating now, making people scurry for their houses by five in the afternoon. Ayesha visited the orphanage by herself, as she had to submit the report with or without her partner. She often went out with Nishika, trying to take her mind off things.

December came but there was no sign or indication of Aditya returning. The police braced his family to get ready for the worst possible news. His mother was especially inconsolable.

“I want my son back!” was her constant refrain.

On Christmas eve, the college held a special prayer for the swift discovery and rescue of Aditya. Ayesha could see Nishika weep through the entire ceremony.

September was his favourite month. Aditya stretched his limbs until he could feel that satisfying pop. He read through his report again before closing his eyes for a moment. It was eleven-forty-five on the clock—enough time to have a bath, dress up and present the report to the Reporting Club president before he went off to meet Ayesha for the project.

He was about to enter the bath room when the door-bell rang.

Who could it be?

He opened the door.

“Yo! Wazzup? You could have told me if you were planning to come,” he said, surprised.

She gave him a surprisingly steely glare before entering the apartment, closing and locking the door behind her. She took in the person in front of her—tall, slightly muscular with golden brown eyes, thick, dark brows and untidy jet-black hair over his pale face. Clad in a Nike t-shirt and shorts which were crumpled like hell, he still managed to take her breath away.

“I wanted to talk to you,” she said slowly.

“Sure, why don’t you take a seat?” he said, motioning towards the bed while he sat on the chair.

She sat down on the edge of the bed before saying abruptly.

Aditya’s grin was replaced with a troubled expression.

“You know about Nishika, don’t you?” he said gently, not trying to hurt her.

“But I am so much better than her!” she snapped, her face now growing pale, the pink all but disappeared from her face.

“I am the track-and-field champion, score at the top of the class, was the Year Queen at the last year’s Annual Dance. What else do you want?” she practically screamed.

“You are really an awesome person. And I am sure someone’s out there for you.”

“Nishika is dump! She’s a freaking crybaby with no talent…that—”

Aditya slapped her face with all his might, his brown eyes crunched up in fury.

“Don’t you dare trash-talk her,” he said in a low, angry voice.

“So you now defending her?” she said, laughing maniacally.

She suddenly pulled out a large kitchen knife from her messenger bag and before he could say anything, he felt the cold steel plunge deep into his heart.

You are mine…you cannot belong to anyone else.

And he slipped into oblivion.

Ayesha looked at her white sweatshirt, noting dully at the faint pinkish stains. Inwardly groaning at the loss of such a fine garment, she took it off, only to dip it into the blood escaping from his wounds. Next, she put it in the clothes dryer to dry. She proceeded to chop off his body into pieces and fitted them into the garbage bag. She mopped up the place with some baking soda and vinegar to remove the stains. She searched for the biggest suitcase in the store room, stuffed Aditya in it and shut the case. After that, she took out her sweatshirt and examined the colour.

She had always wanted a pink sweatshirt.

Slipping in a note in the landlady’s mailbox and lug the suitcase to the courier office was easier than she had initially thought. She liberally sprayed herself with the cheap jasmine perfume she had bought a couple of days back. It was almost one. She was supposed to reach home within twenty minutes to make it in time for lunch.

She asked them to deliver the case to her address a month later.

The woman at the counter made a cooing sound, making Ayesha’s nose wrinkle up in disgust.

She was late for lunch by five minutes.

“You are never late,” her mother remarked casually.

“Had some stuff to take care of,” she muttered through the mouthfuls of salad.

“I never thought you had a pink sweatshirt…”

“My friend gifted it to me the other day.”

A month later, Ayesha took a sick leave and stayed in. She insisted her mother to go and visit her sister on the other side of town.

In the evening, her mother was surprised to see a fledgling geranium bush in the garden.

“A flower-man was passing by…thought I would do some gardening to pass the time,” Ayesha shrugged, poking a stray mud clod in place.

When Nishika came to visit her at the New Year’s Eve, she couldn’t help but remark how beautiful the geraniums looked.