You are here: Home / Suspense and Thriller / Mystery case (Part 1) 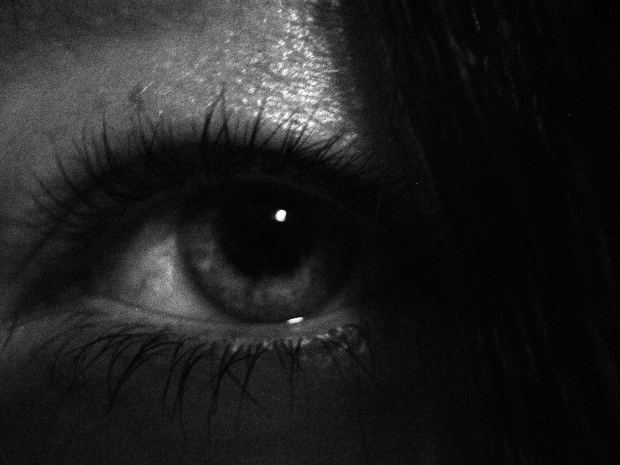 Chapter 1: A warm welcome to the detectives and a SHOCK to the village

Once in a small village named Richie.Everything was quiet and peaceful.But one day in a farmers house THE FARMER WAS KILLED.THE PEOPLE WERE SHOCKED TO HEAR THIS.Their peaceful village had received a kill.The sarpanch called two foreign detectives arrived a blond teen who was 16 years old his name was Xavier. And a total black hair guy who was 19 his name was Warren.The Sarpanch of the village welcomed them and arranged a private home for them.They started their work the next day.When they started their work they went to inspect the farmers house.IT WAS DIRTY AND ALL THE FURNITURE WERE BROKEN.They searched top to bottom they found 3 clues.

One:Bits of poison on a book

Two:A note to a person about kidnapping

Do you know what this means said Warren to Xavier. Xavier said yes, he told:The farmer had the poison. And was in a bad gang maybe he didn’t listen to the gang’s rules .The poison did not work. Maybe and they used the sharp glass to kill him.Warren said you’re correct because the farmer was covered in blood poison’s do not do like that.They showed the kidnapping note to the sarpanch they did not show the other 2 evidences.The sarpanch  said that  the rascal was CHEATING US.

Chapter 2: More Information about Warren and Xavier and a new friend arrives

Warren and Xavier’s friend Hazel arrived to Richie he was a detective too.Xavier,Warren,Hazel were working for a secret organization it was Y.T.F.C it stands for:Young teens fight crime.This wasn’t a assignment they like fighting crime so they find as many cases as they can.Hazel asked have i missed something? Xavier said No except the kidnapping note and poison and sharp blade.OK said Hazel i found out some news of this case Hazel said. What asked Warren and Xavier Hazel said A bandit camp Warren and Xavier said at the same time maybe that is the GANG.No said Hazel It’s related to the case they’re going to attack Richie in an hour.Warren said we should warn the villagers they warned them and before leaving Xavier asked Hazel where is the bandit camp Hazel said i have a map.Hours later they reached the place.They had weapons:Two pistols each and 2 bombs each and a knife for the three they saw three bandits putting food on the lorry.Warren said we’ll kill them and take their clothes and pretend we work for them great idea said Hazel.They killed them and wore the disguise they reached the place where the leader was and asked his name.His name was Max he said leave for Richie they went to  Richie. WHAT WAS GOING TO HAPPEN TO THEM??

Chapter 3: PRISONERS OF RICHIE AND THE PEOPLE OF RICHIE SAVED THE HEROES

Hazel was surprised the bandits used to be chatty he smelled something fishy.The bandits suddenly attacked. Hazel was in time he had a bomb ready with him he throw ed it . It went flying.Warren,Xavier and Hazel escaped but Richie was in DANGER!!.They hurried fast and when they saw Richie.Every thing was burning.Xavier could hear people.He rushed like a hurricane He RAN AND KILLED THE BANDITS IN HIS WAY WITH A PISTOL. WARREN AND HAZEL WERE AMAZED.Xavier saved two kids.The three of them took lots water and throwed them all over the village it was safe.Bandit leader Max kidnapped the heroes without the knowing of the leader.The sarpanch yelled to the people calm down they calmed down finally.The sarpanch asked: “So” where are the detectives.No one said anything.They searched the whole village but got nothing. BUT THEY GOT A NOTE SIGNED BY WARREN, XAVIER AND HAZEL. This was what written on it: People of Richie don’t worry they kidnapped us don’t fear stay brave.The sarpanch was SHOCKED he told to the people arm yourself  they put lots of gear chests, shoulder pads, helmets, Boots, capes and sword for knight, staff for wizards and bow for archer.The people asked how will we go there where is it? The sarpanch said i have a map. Warren gave it to me he said. They marched the way to there. THE EXCITEMENT GREW BIGGER AND BIGGER AS THEY TOOK EVERY STEP.

THEY GUESSED THE GANG THEY WERE TALKING ABOUT IS A BANDIT GANG.THEY CAME TO SAVE THEY’RE HEROES

Chapter 4: THE END OF THE BANDIT CAMP

Meanwhile what had happened to Xavier,Warren and Hazel.One of the men gave some thing for them to drink and they fell asleep.As they reached the place they woke up.They were facing Max the leader of the bandit camp.He said you dare to come and destroy my people.Warren replied HEY YOU DON’T KEEP YOU KILL THEM.Yes it’s true Max said.The village had reached the place the planned to attack on a sudden moment.Night fell and Warren and Xavier fell asleep Hazel wasn’t asleep he took his pocket knife and cut the rope.He escaped to Richie.No one was there.He ran back to the jungle and searched he bumped into the villagers.They saw him and said Hazel you’re back.But Warren and Xavier aren’t said Hazel.They some how saved Warren and Xavier and went to Max’s camp suddenly lots of bandits came and Max also came.They fought badly especially the sarpanch they took out all the bandits except the leader then when they were fighting Max they won.In celebration they asked are you the last or is there more after you? He said wrong time fellows.My boss is left.He is in… he said and he died Oh no call an ambulance Hazel said they called and he was dead they searched the whole place They got:

A poison gas fixed around the corner that’s why Max died guess the boss didn’t wanna let out his secret.

A plan TO DESTROY AGRA THE MOST TERRIBLE PLAN.

WHAT WILL HAPPEN WILL AGRA BE DESTROYED OR WILL IT BE SAVED AND WILL THEY FIND THE BOSS OF MAX?