You are here: Home / Suspense and Thriller / ThE PerFecT CriME 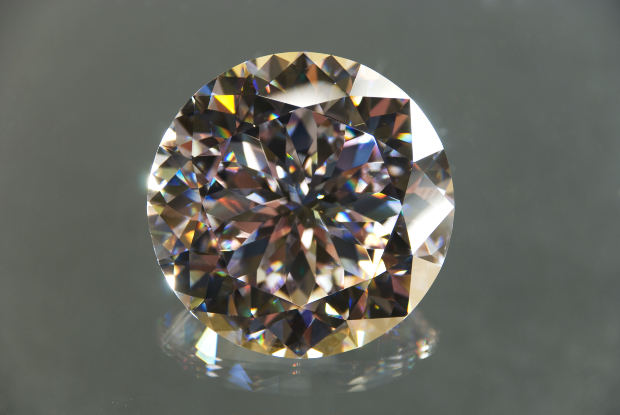 Sonya vyara was the most beautiful thief in the world. Her blond hair, olive peach skin and blue eyes could make any man drool over her. She had been notorious in stealing from those stupid men and her sensuous figure had made the job easier.

Right now, wearing a golden black gown with bare back and the laces upto her breast, she was the centre of attraction of all men in the party. The luxurious party was organised by the prince of Saudi Arabia on the occasion of his 30th birthday and every man and woman present in the party were all businessman, tycoons, billionaires, and famous Hollywood actors. All of them except two.

Richard Evans had joined the police force because he wanted to do the right thing. A young man of 25, Richard was tall and handsome. His dark skin, fit muscular body and perfect jawline was enough for anyone to confuse him with a Hollywood star. Here in the most luxurious party in the world he fitted perfectly, looking for the criminal he always wanted to catch.

It was two months ago that the FBI had gotten an anonymous tip : The ‘tear of mermaid’ will be stolen from the birthday party of Saudi prince. ‘She’ will be there.

Nobody knew who she was, as nobody had ever seen her face but she was already infamous for stealing more than a dozen priceless jewels and artifacts from all across the world. The vinchi’s Monalisa, crown of Louis XVI, kohinoor, the blue sapphire and many more. You name it and she had stolen it.

So the FBI had recruited Richard Evans from NYPD to catch her or atleast find out who she was and what she looked like and Richard took his job very seriously.

He looked at every man and recognised their faces. The people he had never seen were also there but that was to be expected. He moved around and went close to the room where lived the Saudi prince with his precious diamond ‘The tear of mermaid.’

‘Sorry sir you cannot get closer from here,’ the security guard refused him politely, confusing him for a guest at the party.

Robert looked at the guard carefully. He was a tall, masculine man almost twice as Robert himself and that lipstick mark on his neck told Robert that even guards have a good time in these big mansions.

‘I was looking for bathroom,’ Robert tried to be funny and went back from where he came.

The Tear of mermaid was secure, he had no doubt but he also knew that what nobody could come close to achieve, ‘She’ could do without a sweat. And it was bothering him.

From upstairs, Sonya Vyara looked at a man in the party and smiled. He looked perfect in every way a gentleman should look like. It had been a while since Sonya had last tasted a man, made him her good pet and enjoyed every second of it. And now the time was finally here for her to quench her thirst.

Robert Evans was busy scanning every guest in the party when he saw a beautiful woman approaching him. She was stylish and elegant, though Robert had never seen her, the way she cat-walked towards the Robert made him mistook her for a Hollywood diva.

‘May I help you Milday,’ he moved his hand towards her with elegance.

‘Yes please,’ Sonya smiled at him. ‘I was thinking you will be a perfect gentleman and accompany me somewhere I can use a bit of silence. Parties bore me.’

The way she winked made Robert feel a sudden warmth in his heart. His body gave a sudden jerk and he could feel himself getting hard.

‘Where you might want to go, Milady,’ he said in embarrassment trying to hide his red face.

The moment Sonya saw him, she realised that her charm had worked and she took great pride in it. ‘Let’s go at top. There we will be alone and still be able to see party and the tear of Mermaid when it will be presented down here.’

It was perfect for Robert. He would be able to spent time with sweet lady here and still be able to keep his eyes on the Diamond. Why didn’t I think of that, he thought in amazement.

They both went at the top of the mansion and looked around. The view was magnificent. The widespread garden and lawn, the peach trees, atleast a thousand cars ranging from ferrari to lambhorgini for Hollywood boys down at the party and stealth cars with bodyguards for politicians and billionaires.

‘This is perfect,’ Robert said in amazement.

‘Shut up,’ Sonya said as she pulled his neck down and kissed him passionately. Robert strocked his hand on her back and made her gown fall loose to the ground as she stripped him of his coat.

Soon they were both lying naked on the terrace of the most beautiful mansion in the world and feeling glad about it.

Never in her life Sonya had met a man who could match her passion and she had almost thought of giving up on her quest but today the man lying on top of her had proved her wrong.

Meanwhile Robert felt as he was in heaven. He could feel her sweating body and the heavy satisfied breathes. Never in his life Robert had imagined there existed a woman so perfect who could make him work extra hard while still making him feel like a king.

They both lied there for a while catching their breathes and kissed each other passionately.

‘So tell me Mr,’ Sonya said trying to catch her breath. ‘Who are you and what is your name?’

Any normal time Robert would have lied swiftly but not this time, not to the woman who could have asked him to jump from here right now and he wouldn’t have given two thoughts to it before jumping.

‘I’m a police officer.’ Replied Robert honestly. ‘I’m here to look after ‘She.”

‘Who is She?’ Asked Sonya in genuine amazement. She was surprised she had just made out with a police officer without even knowing it. It was getting interesting every moment.

‘She is a criminal’ Robert said in a serious tone. ‘I hate criminals.’

‘Ah, that’s very brave of you officer,’ Said Sonya as she kept her head on his bare chest. ‘I already feel safe with you.’

Suddenly the screaming sound of panics jolted from down where party was going on.

‘What happened down there?’ Sonya asked while pretending to be afraid.

‘Don’t be afraid.’ Robert told her. ‘I know what happened. ‘She’ must be down there. Hurry let’s get dressed. We must go there immediately.’

‘No wait I can’t go down there’ Said Sonya in distress.’

‘Why not?’ Robert looked at her.

‘My gown,’ she replied. ‘You tore my gown when you undressed me.’

Robert smiled at her. ‘It’s all right. Wear my coat. You’ll be fine.’

They both went down where a chaos had ensured. ‘Everybody calm down,’ screamed Robert as he flashed his batch for everyone to see.

‘Officer,’ screamed the prince in madness. ‘Somebody stole my tear of mermaid as you FBI said someone will. Find out who did it.’

‘I know Sir, you calm down.’ Robert assured him. I’ll check every person here down to the last. We will find your diamond. ‘

Robert and the prince’s trusted security guards made everyone else stand on the line. Few business man had refused to be checked and the prince had accepted given the status of those man, to which Robert had no objection.

They started checking every man and woman, right from the space under their tie to the underwear they wore. But found nothing.

Sonya too had to stand in line wearing only Robert’s loose coat which covered her to the knees but revealed everything on top. As the line reduced Robert reached to the Sonya.

‘You are going to check me again.’ Sonya winked at her.

‘No need,’ smiled Robert. ‘I have already checked you from top to bottom. Plus I wasn’t done thoroughly checking you when the Robbery occurred. So you are clear.’

Every guest was checked down to the last but the tear of mermaid couldn’t be found. At last every guest was allowed to leave. Robert had accepted his defeat.

‘Will I see you again?’ Robert looked at Sonya sadly.

‘You will,’ Sonya gave him a last kiss for the day. ‘Here’s my phone number.’

Sonya slid a folded paper in Roberts tailored pants, under his belt and waved him goodbye.

When everyone left, Robert sat on stairs and felt defeated. He was so close to get ‘She’ but couldn’t catch her.

It started raining. Robert lied there for hours trying to figure out how she stole the tear of mermaid.

It was the Perfect Crime, he thought and dreamed about the lips of the girl he had made out with. Her lips were full, giving her a distinct look and the way she kissed his neck passionately and dug her fingernails on his neck made him feel….

Wait? Robert snapped out of his dream and realised he was lying in the rain.

He jumped crazily, almost laughing on his stupidity. How could he had been so stupid?

He madly unbuckled his belt and removed his pant to find the piece of paper. As he unfolded the paper everything became clear to him.

Everything that had happened flashbacked in front of his eyes.

Right from the moment he had gone to see the room of the prince, the guard who stopped him had the exact same lipstick and fingernail marks as he could feel on his neck.

So that’s how she did it. It was the perfect crime, he thought. As it involved an idiot like me.

She had already stolen the Diamond when she met me, all thanks to her superior seducing capabilities, the guard couldn’t have lasted a minute against her charms.

Then after stealing the Diamond she took me up and kissed me unexpectedly only to drop the tear of mermaid in my coat. I couldn’t feel it as I was busy undressing her and she was removing my coat.

And when we were coming down she said I torn her gown but I don’t remember tearing it. She had done it herself when I was looking down at the mayhem going on at the party only so that I will offer her my coat.

And at line I didn’t check her because I was sure she had nothing on her while she had the Diamond all along safely inside my coat’s pocket she was wearing.

As the Robert came upon the realisation, he lied there on the rain defeated while the paper on his hand read.,

I enjoyed loving you..