You are here: Home / Suspense and Thriller / Macabre waves 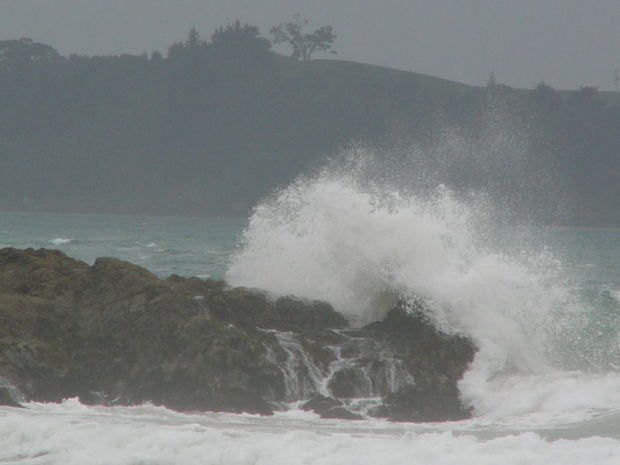 A huge gigantic wave came from nowhere and engulfed me. I lost my one and only support – the wooden plank upon which I was floating in the ocean. The water was cold – colder than ice and to make matters worse it was raining. I was grouping tirelessly and I knew there wasn’t slightest hope of my survival. Still I tried. Splashing my hands desperately, I was able to come up on the surface again. It took all my strength within me to move my hands against the strong inevitable waves – the force of nature. I was not able to see anything. The sky was dark grey. Air filled with fog. The big fat raindrops splashed against my body, making my every attempt to survive- my every stroke to swim impossible. The loud pit- a- pat of the raindrops along with the noise of the tides made me nearly deaf. But I could also hear another distinguished sound. I thought that I was imagining it. The sound was distant and little vague. Almost like a lull inside my head. Somehow it was very much familiar to me.

I was certain that the angels of the heaven are waiting for me . My end is near and there I will be in the most blissful place which even money can’t afford. A place where nothing but truth exists. And in spite of the truth the people are in complete satisfaction.

“Tuhina” I can hear it once again. The angels….or. Or is it the devil ringing my death bell in the hell waiting mockingly for me to come and pay for my sins? After all, in truth I haven’t been very kind and generous. Still it’s true that I wasn’t so bad and evil. I was confused and eager to know the fate lying ahead of me. Is it the angels or the devils?? Hell or heaven???To my relief, it turned out to be neither of them.

Now I can hear it more clearly and was certain that it wasn’t my creation. I turned around and saw a boat struggling among the waves at some distance. A thin girl was aboard the boat. She was desperately trying to steer the boat towards me. Ishika??? Is she alive? How on earth is it possible? She was with me on the same ship which at mid night got ruined into pieces by an iceberg. I myself saw her drowning the vast ocean, within a few minutes of the unfortunate accident.

Seeing her alive, I got a ray of hope. A hope from god perhaps. I used all my strength to pull myself on the boat with help of Ishika. I was exhausted and thought at that moment that there is nothing as peaceful as death itself. And so did she. You can make out from the look and the expression on the poor creatures’ face. Hair stuck on her face due to sweat. Her eyes were red and swollen owing to her crying for so long. Her eyes were totally haunted. And if I will be alive, I swear that for once I can forget those dreary dead waves but her eyes – her eyes would have haunted me for years and years.

“Yes- yes, it’s much b-better n-now. “My voice still shivering in cold and fear. We survived. The night passed. With the rise of the new sun, our hopes of survival revived. “Ishika I am hungry”

“So am I” said a melancholic Ishika. Her eyes were more dreadful than ever. The emptiness in them made me realize that only my hopes of survival were rising. She had no expectations. She was simply just waiting for death to come to her. Just waiting for something to happen. This will make her rest in peace and lying in the lap of bliss.

“Are you saying there is no food?? But but there must be something in the life aid packet. GOD HELL!! WE ARE IN A LIFE BOAT!!!” now I was literally going nuts.

“I have checked it. But but there isn’t enough food for both of us”

“Well where is it?? I am dying of hunger”

she stood motionless “Tuhina, we should save it” her voice was cold.

There was a moment of absolute silence. We together listened to the sound of waves splashing everywhere.

“I see” my voice was different and distant. She was gazing at the ocean, tears rolling down her face. Suddenly my callous hands were out of my control. Whether it was hunger or the circumstances or her melancholic state which forced me to take this step, I don’t know. But my stomach was churning and twisting. I pushed her into the vast endless ocean. After all, I haven’t been so kind and generous in my whole life time.