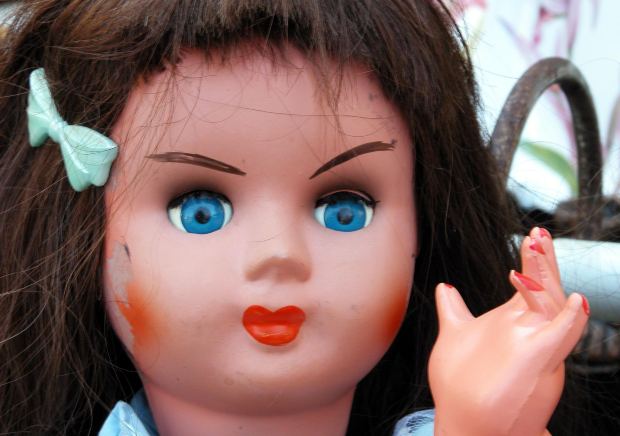 Rita lives near to Bay street, she is a cool and normal school going girl. Her mother works as a caretaker in the nearest daycare and father runs grocery store, located at 3 streets far from her house. She was happy with her family until the incident that changed her entire life.

There was a cosmetic surgeon, Andrea, opposite to her house. After school, Rita goes to the clinic and spend some time with the surgeon. But the hidden secret is Andrea do black magic to those who come to her clinic with their hair , used things and earn money by making them as servants to fulfill her desires. After doing black magic , victims listens whatever Andrea orders (Some of them did robbery and went to jail ) . One day , as usually Rita went to clinic but what she saw made her life to lost everything and everyone. At the time when Rita entered the clinic Andrea was doing Black magic with a doll pinned with needles on head and legs. She hide behind the door and watched everything she did. She got fever on seeing this and when her mother forced to tell about what happened , Rita opened up and said everything  to her mother. Her Mother filed a complaint on the police station and then policemen when went to arrest the Andrea. In order not to spend her entire life in jail. She committed suicide by cutting her throat ,while dying she used to spell some words for her rebirth. With that words she got more powerful ,her blood flows near to teddy bear doll and she transfers her soul and power to the doll and dies.  Police recovered the body and closed the case as suicide.They ceased the clinic.

On December 26 , heavy rain no one was walking on the street. Rita went to school and her father was busy with his grocery store. Due to rain daycare was closed and her mother stays in the house. The Doll( Andrea soul) was angry her family and waited for perfect time. When her mother was in the house alone doll came near to the house and knocked the door. Her mother opened the door but no one was there and closed the door with fear of who knocked the door. And went to her bedroom and slept ,after some time something gone wrong in the house and things in the kitchen started falling down itself. She woke up and switched-on lights kitchen was oily but no one was their,her fear increased and heartbeat started beating fast.  Turned back and turned off lights and started walking towards her room but suddenly she slipped and fell down and hit to a chair and died. After her death the doll went to clinic with smile. After knowing the news her father came to house saw his wife dead body and started crying .

And he left the house and started walking on roads crying . The doll hypnotized him and made him to jump over the coming train and he dead. Now Rita lost her father and mother. She then went to her uncle’s city , 30Miles from her house.

Then many happened in the bay street . Clinic was demolished and constructed new building. Rita house was sold out to some other person with the help of agent.

Rita celebrating her 20th birthday. She got many gifts ,some are beautiful and some are expensive. She also got gifts like teddy bears , one of the teddy bear was Andrea(  when demolishing the house workers threw away the doll and beggar took the doll and sold it to nearest doll broker for money). After the party same happened here , sounds in kitchen , knocking door, baby crying sounds every night. She realized these things are did by Andrea doll and tried to recognize the doll.

Suddenly, doll tried to kill her when he was watching TV. She tried to escape from her but she follows Rita where ever she goes and finally she remembered one line said by her friend while reading supernatural book in library( Fire makes soul go to heaven) , she went close to the doll and held it tight  and threw into campfire outside the lawn.

Now, she is happy and celebrated her 58th birthday with her husband and children.

Happy Ending and  Thank you .