You are here: Home / Paranormal Experience / The Jaagar at SIlla village 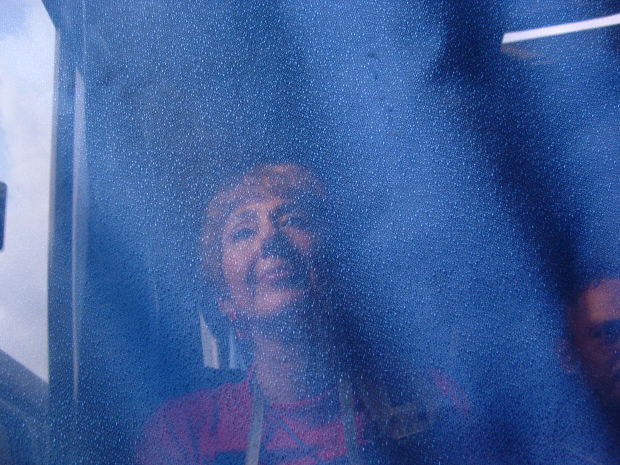 The long rubber blade of the windshield wiper swung back and forth, pushing away the water droplets in the slight drizzle. The first rains of summers brought with them a moist earthy smell through a scented breeze. Through the window I could see a vast expanse of a dry river valley surrounded with mountains and jungles of Sal trees. Leaves had started to appear on the branches of dry, deciduous katha trees, rendering life to their ghostly skeletons. In a few months, a seasonal river will flow through this dry, parched river bed. I had crossed Mal Devta, a small, secluded picnic spot in the outskirts of Dehradun, and was heading towards my destination – Silla gaon.

Perched on the top of a hill at a distance of 24 kms from Dehradun, Silla is a tiny, concealed hamlet. I had heard that Silla was one of the very few places near Dehradun where the ancient tradition of Jaagar was still practised. Jaagar is an ancient form of spirit and deity worship practised in the hills of Uttarakhand. An age old tradition that is deeply embedded in the social fabric of the Garhwal hills, Jaagar ceremonies are of two types.

While Dev Jaagar involves invoking gods into the body of a human being called Dangaria, Bhoot jaagar involves invocation of the spirit of a deceased person in the body of Dangaria. Musical ballads with references to holy scriptures like the Mahabharata are sung by a Jagariya to call upon the gods and spirits. A jaagarcan last as long as 21 nights and culminates with the Dangaria starting a frenzied dance before he addresses the grievances of the people gathered. Jaagars are often seen as a way to seek penance for a crime or as a way to seek justice from the Gods. The quiet, reclusive village of Sillahas a famous temple where Bhoot jaagar is performed every year since 1906. In my urge to witness a jaggar, I decided to drive towards Silla in the middle of a Sunday afternoon.

As soon as I crossed Mal Devta, the road grew steep, narrow and unfamiliar. As I gained altitude, the rippling sound of the river Yamuna flowing below gradually faded away. Pebbles and rock debris of frequent landslides lay strewn on the roads preventing any chance of accelerating through the curved, zig zag roads. To add to that, I was stuck for an hour in the village Chamroli, courtesy a large marriage procession dancing to the tunes of Bedu Pako (local folk song). I stood there helplessly, admiring the ripe paddy fields exuding a mystical red color because of the falling rays of the setting sun.

By the time I started again, it was dark. Silla was still another 15 kms away. I had almost covered half the distance when disaster struck. The halogen headlights initially dimmed and flickered for a few moments and then gave up completely. I was stranded in the middle of nowhere. No cell phone signals. No traces of civilization nearby. Just the sound of crickets piercing the darkness. I took out my torch and barely managed to park the car on the side of the road. There was no way I was going to spend the night in the car.

The nearest village was Chamroli and I started walking down. I had descended half a mile when I saw a narrow trail heading up on the side of a hill. Where the trail ended, I saw, what looked like a flame coming from a lamp. Perhaps a family of gujjars who had set up their camp, I thought. Before I could rejoice at the sight of humans, I was startled by the twitch of a hand on my back. I almost screamed and sprang around to see an old, frail woman standing infront of me. The light of my torch fell on her hollowed cheeks. Her face was marked with wrinkles and lines as old as time. A large nath adorned her nose like a reminder of her youthful beauty once upon a time. The collar bones protruded outwards because of the heavy sack of firewood she was carrying on her shoulders. The eyes were partly clouded with cataract, yet they exuded motherly compassion and love.

She looked at me with a wry, affectionate smile and asked “Have you lost your way, son?”

“My car broke down on my way towards Silla. How far is Chamroli from here, Amma ji ?”,I said.

“It would take you atleast an hour to reach. But it is not advisable to go alone in this darkness. Just last week, Bindumati’s calf was taken away by a leopard. I live in a small hut on the top of this hill. It is small but you can spend the night here. You can leave in the morning tomorrow.” said the old woman.

I happily obliged. The trail led us to a beautiful meadow of pines and willows. A fresh aroma of resin and pine cones filled the air. The hut was small but cute and cozy. The outside was made with stones and pine wood stacked together closely for insulation. It was covered with a chimney and a slanting wooden roof. The inside of the house had a neat, glistening floor of mud, a wooden cot and a small space for the earthen chulha (oven). Amma ji cooked me an early dinner of modest, sumptuous daal bhath (lentils and rice) with a local salad made with spinach and bhat(black soyabean). Post supper, we sat and chit chatted for a long time, talking about the hardships and daily struggles of hill folks. It was close to ten at night when I snuggled into the warmth of my sleeping bag.

I was awakened the next morning by the sound of chirping birds. I splashed water from the tap and looked around for Amma ji. It is common for the women of Uttarakhand to wake up early and leave to attend to their farms and collect firewood. Seeing no sign of her, I left the place and started walking towards my car. Since I was so close to Silla and I had the entire day to myself, I decided to pay a visit to the village and the temple.

By the time I reached the temple, locals informed me that the Jaagar had culminated the previous night. I was disappointed. Still, I decided to meet the jagariya who was a direct descendant of the person who built the temple in the name of Goddess Nanda devi in the year 1906. A large courtyard of stoned tiles stood infront of the temple. Remnant ashes from the havan lay scattered around the sacred fireplace. Sitting under a Peepal tree covered with shimmering, red colored chunnis, the jagariya, Mr Devi Prasad Gildiyal, narrated me the story of this old temple of Silla gaon.

The year was 1836. A widowed woman named Girija devi lived in Silla gaon. She had three sons who stayed with her. For many years before Girija Devi’s husband died, the family enjoyed abundance and prosperity. However, after his death, the sons grew greedy for the acres of land that had been bequeathed to their mother. She was tortured everyday. In the year 1840, Girija devi died of tuberculosis. In the years to come, the sons faced numerous adversities. They had their land but it never yielded crops. The trees withered and the family was reduced to state of utter penury and indigence. It was the curse of Girija devi.

Then in 1906, Girija Devi’s great grandson instituted this temple for salvation of Girija devi’s soul. From that year onwards, a jaagar was organized every year to invoke the spirit of Girija devi and ask for her forgiveness. By the time the story ended, it left goose bumps on my arm. I walked into the temple to pay my reverence to the departed soul of Girija Devi.

On one of the walls, I saw an old portrait of Girija Devi hanging on the wall. A chill ran down my spine. Gasping for breath with an open mouth I stood there, speechless, frozen and numb. The hollowed cheeks, the large nath around the nose, the wry smile and the beautiful, compassionate eyes, I had met Girija devi before.

On my way back to Dehradun, I stopped by the trail and climbed up the hill….Only to find an abandoned shepherd hut with piles of stones, mud and debris.