You are here: Home / Paranormal Experience / A Night Of Horror 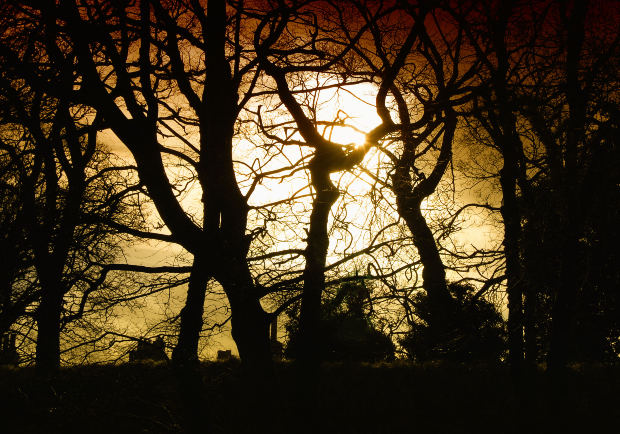 The incident that I am about to reveal took place when I was pursuing my studies in Canada at a certain college at a small city with less population. It was during my final semester of Master’s program at the university and I had only a month left for my thesis defence and graduation. During the last few months I was loaded with thesis corrections and sometimes I even stayed backed for the entire night at my department office room, working on the corrections. As a graduate student, I stayed at the university graduate housing on my own. The graduate housing took 20 minutes by walk from my department. I usually walked back home after finishing my work.

One afternoon I was busy working as usual on my thesis corrections. It was during the late December of 2013 and the university was closed for winter break. I was alone at the department, working. Even at my graduate housing, majority of the students had gone home and only very few of them remained scattered on different floors of the nine-storey housing building. Since I was alone at the department, I was getting bored and was unable to focus on my work but I forced myself to continue. Around 8:30 pm in the evening, I headed out for dinner. Since the university cafeteria was closed, so I bought dinner from a nearby restaurant. It was freezing cold but I enjoyed my walk.

Reaching the restaurant I found out that it was closed too and would remain so till January 2nd as the staffs were on leave. I was starving on that cold evening and was little disappointed to find the restaurant closed. I decided to call it a night and go back to my apartment since I could not continue working on an empty stomach. I went back to my office to collect few things and then started walking back home.

It was a clear night and the moonlight lit up my path. The entire campus was silent and only my footsteps in snow could be heard. The snow was thick and it was difficult to keep up my pace. The only thought in my head was having hot corn-soup with sandwich. I had all the ingredients ready at home and I smiled to myself and tried walking fast. Suddenly my pleasant thoughts were interrupted by another pair of footsteps behind me. The very first thought that ran through my head was of a robber. It was common to rob someone on a silent night like that. I turned around and saw no one. I had anxiety issues back then, so any uncomfortable situation made my heart beat fast and my body simply “froze”. I turned around and started walking faster trying to outrun whoever was following me.

I did not hear footsteps but I heard heavy breathing after a while. The sound was similar to that of a dog when it breathes through its mouth. Only it sounded abnormally louder as compared to a domestic dog. I turned around again and saw no one. “If it’s a dog then there’s nothing to fear. But why was it hiding?”, I said to myself. I stopped and glanced around through the bare trees with my heart still beating fast. I could not spot the animal but just before I was about to start walking, I heard a growl. The growl did not sound like a regular dog- it was very harsh, loud and abnormal. I looked around again and this time I spotted the silhouette of a huge man standing on the road at some distance behind me.

He walked closer until he was few feet away from me and I could now see his features clearly in the bright moonlight. He had tattered clothes on, his body was very muscular but covered with thick black fur. His arms were long and clawed and feet were abnormally big. His face was distorted and wrinkled and mostly covered with fur. His mouth was slightly opened and his long canines were visible, his eyes were lit up in the moonlight just like dogs’ eyes do at night. I could not believe my eyes and I stood perfectly stiff on my spot.

I do not know how long I stood there before I heard another loud growl from the monster. It seemed that the growl brought me back to my consciousness from the “frozen” state. I screamed and started running. I did not look back to see if the monster was following me or not, all I tried was to force myself to run faster and reach my place. I tripped several times while running on the snow, and I sweated profusely. The thought of the beast chasing me made me scream over again. It was an empty campus, no one came for help. I would say that I had been very lucky to reach home unharmed. My apartment was on the 8th floor and I did not wait to take the slow elevator. The night-guard came running for help and asked what had happened. But all I could scream was “hide! go! go!” , and then I ran up the stairs. When I reached my floor, I could barely stand, I could not feel my legs and I was panting for breath. The door to my apartment was near and I gathered every bit of my remaining strength to reach and unlock it.

I collapsed on my apartment floor and lied on my stomach. I pushed the door behind me with my leg to lock it. I could hardly breathe, my chest swelled to take in as much air as it could. My heart was beating abnormally fast, my body fell numb and vision blurry. I lied on the floor, wet with sweat and half-conscious. I do not know when I fell asleep but when I opened my eyes I heard someone knocking on my door. It was a bright morning and probably the sound of the knocks awakened me.

I got up and opened the door and there were two policemen and the night-guard. The inspector said that the night-guard had reported my case with the police in the morning and they had come to inquire. As soon as I recalled the incident, shivers ran down my spine. The policemen calmed me down and made me sit on the couch and asked me to narrate the incident. I explained in details what I saw. “It was a-wer, a-wer, w-o-l-f, a werewolf!”, I stammered.

“No such thing exists, miss. Please be more original”, the police officer said.

“It was one believe me, at least it closely resembles one”, I continued. I knew it would be hard to convince them of the real sighting and decided to give in to their demand of “original” description.

“Probably it was someone wearing a mask and playing prank on a silent night. Or it could be a masked robber. Such werewolf masks are available in the country”, I concluded.

The police filed the incident as a “masked robber.” After the policemen left I rang up my friend who lived in a nearby city. She asked me to spend the rest of the holidays at her place and she drove to pick me up that afternoon. Before leaving I requested the night-guard not to leave the building as danger was still lurking. He gently took my advice.

It was three hours drive to her place. On the entire way, we tried to analyse the incident but we could not come to any conclusion whether it was really a werewolf or a masked robber and why it did not chase me that night. My friend did not believe in the existence of paranormal creatures. But in any case it posed danger on campus. She assured me that the police would find out whatever it was and that I was lucky that night.

Days passed and college re-opened. I never heard anyone else reporting similar sighting or the police tracking any suspects. I never stayed back late on campus ever again. I graduated and returned home and did not speak about the incident to anyone. No matter what the policemen or my friend describe the incident as, I still believe that what I saw was not a masked man. The growl still pierces my ears when I remember it and no human could make such a sound. The brightly lit eyes of that creature affirm that it was a beast and that night still haunts me.