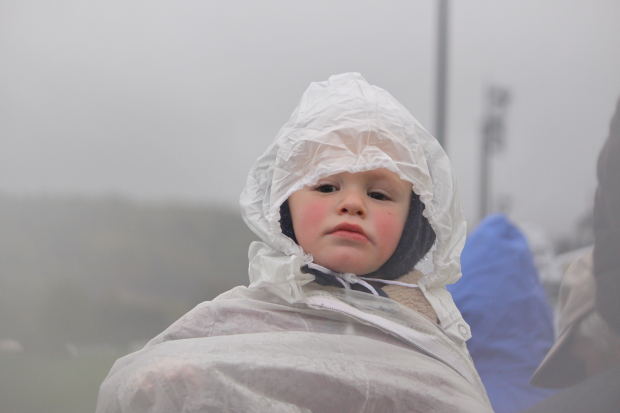 Suspense Story with Paranormal Experience – Rain
(Note: Image does not illustrate or has any resemblance with characters depicted in the story)
Photo credit: jade from morguefile.com

The unapologetic white of the hospital walls provided a morbid canvas for the unfolding scene. It was dark, it was gruesome, and worst of all, I was in it.

The girl was beautiful, no doubt. No older than seven or eight, she had shoulder length light black hair, and a face crafted to laugh and to smile. But the most striking feature was her eyes. Those eyes which had widened in surprise as my car rammed her, those eyes which haunted me all the way to the hospital as I rushed her bloodied and broken body; and would haunt me for so many years. Those eyes which would never open again. Those two beautiful blue eyes.

The older man was leaning over her daughter’s body, head lowered. He was absolutely quiet, no tears, no curses, nothing. Just a damned silence, a silence which was more deafening than anything he could’ve screamed at me.

“I’m sorry.” I stammered out. My clothes were bloodied with the girl’s blood, and my mind was in shambles, even as tears streamed down cheeks. I couldn’t think of anything else to say.

Slowly, the father raised his head. His blue eyes locked with mine, and spoke volumes. About unfathomable anguish, sorrow, torment. About anger.

Looking me straight in the face, he shook his head, ever so slowly. Left to right, right to left.

I woke up in a cold sweat, panting. The nightmare was still burning inside my head. But at least I was not screaming.

Unlike the past seven years.

It was well past six now, no use trying to go to sleep again. I got up and went to freshen up. I poured water onto my face, and stared at the mirror. A rugged face with a mop of black hair looked back at me. The specs were missing.

The quintessential upstart, I thought.

The law was lenient to me, considering my young age, the psychologist’s statement that the accident had affected me deeply, and that the girl’s family hadn’t bothered to attend even one hearing. Not surprising, as her only known relative, the father, had disappeared on the day of her funeral, leaving behind a heart wrenching note that he wasn’t strong enough to go through it.

I got three years behind bars, but needed a further seven month treatment at a mental care institute for depression and trauma.

But, as they say, time heals all wounds. I recovered, and went back to work, managing to leave the past behind me as best as I could. I got recruited into a reputed logistic management company, with an okay salary, and best of all, my marriage is fixed for next month. The only remnant of my past life was the recurrent nightmare, and I was bringing that under control too.

I smiled at myself in the mirror.

It was still night when I set out for shipyard. A huge consignment of books was coming, and I was in charge. It was a routine assignment: take the forty mile drive, arrive in time, sip a glass of coffee, make sure all books are unloaded, report to the boss, and take the forty miles back.

The cool night air blew in through the windows of the Swift. Far off, the horizon was painted in the shiest of orange, and the NH was deserted except for the occasional two wheelers and lorries. There was the faintest smell of rain in the air.

I was in high spirits. Today would be my last working day before my matrimonial leave, as I liked to call it, of a week kicked in. The next two days would be busy shopping, a bachelor party on the third, and then; “I do”.

There was someone standing ahead. The cars headlight brought him into focus. Wearing a green jacket over his black T-shirt, coupled with blue jeans, a thick beard and dark shades, the man looked like a hippie lost in time.

He held out his hand, in the universally recognised hitch hiker fashion.

I slowed down my car and brought it to a stop in front of him. Eagerly, he opened the door and got in. I resumed my journey.

“Where to?” I asked. He hadn’t even taken off his shades.

“To the nearest bus stop or railway station. Farthest, if you will.” He replied. His voice was a gruff hoarse one, one you could associate with kindergarten teachers. I smiled.

“So what’s your name?” I asked as yet another tipper roared past us.

The man remained silent. I was about to repeat my question when he answered.

“My name? Hmmm… I am known by different names. Hari, John, Mohammed, Karthik, Velayudhan; whichever you will.”

I smiled internally. Definitely a hippie.

The man was silent again, before replying. “No; more like I lost the one I had. One fine day, it was just pulled away from beneath my feet.”

I had my eyes on the road, but I felt him turn his head towards me, “Do you know what that feels like?” he asked, in a low, almost menacing, tone.

A shudder passed through me. Like a floodgate opened, the memories came crashing down, ready to drown me.

There was pandemonium at the funeral. The father’s note had been found, and everyone was stumped. Here was the body of the little girl waiting to be cremated, and there were no relatives to carry out her last rites. Apparently, both the father and mother were orphans, the girl their only child; the mother had died giving birth, and I had killed their daughter.

The court had granted me special permission to attend. There were lot of murmurs and murderous looks thrown at me when I was escorted in, wearing handcuffs. But now everyone had something else to talk about.

Who would light the pyre?

I looked around. At the far end of the porch, a few priests were huddled over, deep in discussion over what to do. Islands of men stood scattered here and there, talking among themselves, and occasionally shooting a glance at either me or the girl lying on the bed.

Sleeping. Silently. Peacefully. Her face revealing the slightest hint of a smile.

I walked up to the priests and talked to them. They were shocked and then talked among themselves. They called a few neighbours and Resident Association members and talked to them. Each and every individual’s reaction was etched into my mind. Some nodded sagely, some looked away in shock, and a few walked out with disgust on their faces. But all agreed; this was the best, and probably only, solution.

It was I who offered the gods a ball of rice for her peace. It was I who walked around her body with the ceremonial pot on my head. It was I who lit the little girl’s pyre.

Her name was Aiswarya. Aiswarya Vijay.

*
The honk of the tipper brought me back to my senses. I banked sharply, narrowly avoiding disaster. The Swift came to rest by the side of the road, tyres smoking.

I was sweating, out of breath. The hitch- hiker seemed nonplussed.

We resumed our journey, in total silence.

I was scared. What have you tripped inside me?, I thought. It was my first such episode in nearly five years. And my wedding was only four days away.

The hippie’s silence was like that of one who was lost in thought. He kept his head bowed, not looking up, and it seemed to me that he was wrestling with himself.

The sun was just breaking out on the horizon, and its rays fell directly onto the dashboard. There was now more people on the road now, mostly joggers and morning walkers, though it still was more dark than light.

The hippie looked up again. He hadn’t removed his shades throughout the journey.

A terrifying thought struck me. Paranoia, I tried to dismiss it. But thoughts do not give up so easily.

“Why haven’t you removed your glasses?” I finally asked.

I felt his head turn towards me once again.

“I think I’ll get down here.” he said in an even tone.

I pulled up, and killed the engine.

“Why haven’t you removed your glasses?” I repeated my question.

He looked at me. Slowly, he removed his glasses. I looked into his eyes. His blue eyes.

The eyes that had haunted me for so long.

“Vijay…” my voice trailed off.

He looked at me again. Locked his eyes with mine.

I felt my blood freeze.

“Do you know how it feels to be obsessed?” he began, in a voice quivering with emotions beyond my grasp of understanding, “Do you know how it feels, when day in and day out, your mind is ruled by one thought, and one thought alone. How, no matter how hard you try, you simply can’t let it go, how it echoes around inside your head, longing to be free, but refusing to leave. It is living death. Do you know how that feels?,” He was silent for a few seconds, then, sighing, he replied to his own question, “I guess you do.

“Seven years ago, I lost everything. Everything. I even forfeited my right to my daughter’s last rites. I wandered, a mad man, seeking answers. And answers lay everywhere. It was in peace, it was in violence; it was in forgiveness, it was in revenge; it was in God, it was in Devil, it was everywhere. For seven years, I thought, my salvation, my only purpose in life, lay in your blood.”

He reached into his jacket and pulled out something. The morning rays glistened off a revolver. Loaded. He pointed it at me.

My mind was racing, but I simply stared idiotically, stupefied, at the gun pointed at my heart. And one thought latched on: My past. My past.

It seemed like an eternity, but it was only a few seconds. He let the gun drop. It clattered to the floor of the car.

“But you defeated me,” he continued, “You suffered more than I did, you repented. You made the right decisions, and I made all the wrong ones. I… I didn’t even …” he choked up. Wiping off a tear, he opened the door and got out of the car. I simply watched, dumbfounded.

The world was a pale yellow colour by now, with the sun ready to begin his daily trip across the sky. An ambulance roared past us.

He closed the door, and leaned in through the window.

“You are a better man than me,” he said plainly, “a better human being.” He paused for a few moments, looking into my eyes deeply, almost searching.

“I forgive you.” he said silently.

Vijay turned and walked away. I didn’t do anything, I simply watched him walk. He was a well-built man, slightly plump maybe, with a squarish face almost completely covered by a beard. But the most striking feature was not his eyes. It was the little girl who walked beside him; a girl with shoulder length light black hair, blue eyes, and a face crafted to laugh and to smile.

As father and daughter became specks on the horizon, Aiswarya turned around, and waved at me like an old friend.