You are here: Home / Paranormal Experience / 1980-THE REVENGE OF PAST 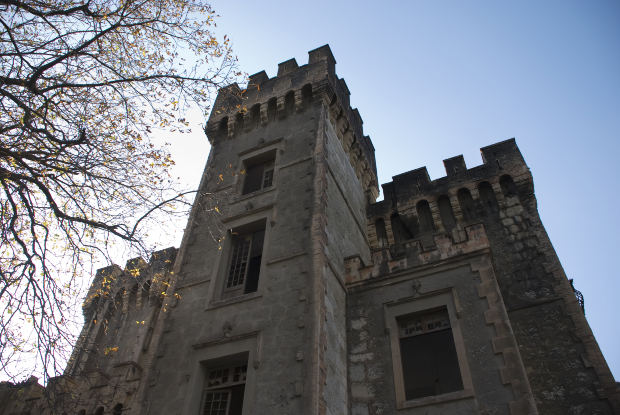 Paranormal Short Story – 1980-THE REVENGE OF PAST
Photo credit: imelenchon from morguefile.com

After the soul went inside Alice’s body, she got a nightmare. The next morning when she was getting ready for school, she vomited blood ! When she stood straight for relaxing, a drop of blood fell on her face, she looked to see from where it fell from and saw a scary lady bleeding her mouth and was holding the ceiling and looking at her. She got scared and screamed. Her parents came and found Alice was faint and fallen down. Then they woke her and asked:“What happen dear ? Why did you scream ?”

Alice got up panting and said:“Mom !, there was a creepy lady here and she was bleeding her mouth !”

Gulliver asked:“where is she ?” then Alice pointed the ceiling and said:“she is hanging from the ceiling, I don’t wanna see her !”

The parents looked at the ceiling but they didn’t find anyone, they said to her:“No one is there, see ?”.

Alice said:“ No! I saw, it was there!”. Her parents then took her to doctor and told him about Alice, he said:“She has surely seen something scary. Take care of her health”

In the evening, Peter and Gulliver went to the old room in second floor to clean it. There Peter found a ball, after they cleaned it, Peter went out to play with the near a well. While he was playing, the ball by mistakenly fell into the well. So he went near the well and peeped in to see where the ball was, suddenly a voice came from the well:“Come here my child ! I am your mother”. Peter got scared and ran back to home.

At night, when peter was sleeping, he felt like something was on his lap, when he got up to see what it was, he found the ball which fell in the lake on his lap. He got scared and threw the ball and ran to his parents and said crying:“Someone’s in my room !”.

Sonora said:“We are getting too many problems, lets call my cousin, James, he expert in this paranormal things, he can surely control the ghost.”

Gulliver asked:“How do you know it is a ghost ?”

Sonora said:“The ghost appeared in front of me several times, but I didn’t tell you.”

The next day morning, they called James, he told that he will be there by next week.

As days passed, one day James came to their house. They said to him what was happening for the past couple of days. Then James asked:“Can you show me the place where Alice fainted”.

Then they took him to the place. While James was looking at the mirror, he saw someone walking behind them wearing a black dress, when he turned back to see, no one was there. Then he told:“There is really a very old evil spirit in this house and if you people don’t mind I would have to stay here to find more information”.

Gulliver and James found some information that the man who killed the lady was Gulliver’s father but the victim was not her mother because she died very soon after giving birth to Gulliver.

One night, when James was sleeping, he heard some murmuring sound coming from his cupboard, so he went and opened the cupboard, as soon as he open, a scary thing killed him! The next day morning, when they were on the breakfast table waiting for James to come. After along time Gulliver went up to call him, when he found him dead, he screamed and rushed to his family and said:“Pack up! We’re moving now”. Sonora asked in worried voice:“Where is James?” so Gulliver told him what had happened and told her to be quick.

While they were packing their luggage, Gulliver heard some noise coming from store room, when he went inside the store room suddenly the electricity went off. When he switched on his mobile’s torch, a scary creature appeared in front of him. The creature said:“Today I’ll kill you and take my revenge! Ha, ha, ha!”