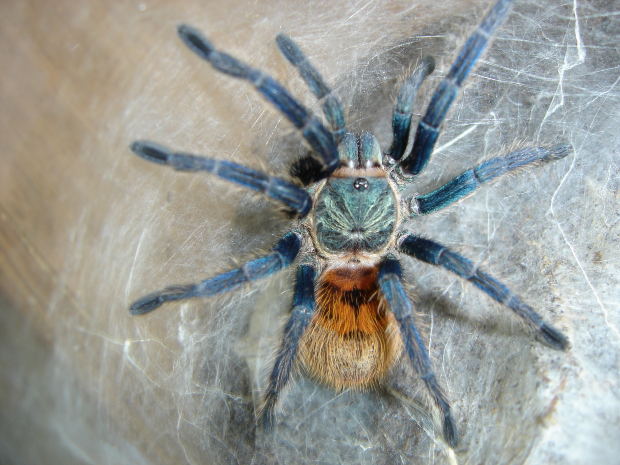 I heard a scream, I looked in the direction of the voice and saw a couple of guys laughing at a teenage boy desperately trying to remove what looked like a tarantula spider off his legs. I pretended to care I wanted to help the young teenager but I was damn too scared to get any way near the 10 inch arachnid and inside my head, I mocked and cursed those guys for making fun of someone’s misery. I wished they’d suffer for doing that, it seemed universe was in a good mood today because my wish was granted in one instant.

The struggling teenager got the tarantula off his legs by violently shaking it, unknowingly throwing it towards the guys who were laughing at him. I could swear to god it was no co-incidence.

Somehow, the two guys stomped the poor creature and ran away from the scene. I know these creatures look dangerous but they are not, so much so that there has almost never been a human fatality because of a tarantula.Their size and appearance though, scares a lot many people, including me.

I wondered how the spider got in here, after all New Delhi was not a place where you’d find such creatures roaming around freely,especially when their natural habitat is about 9000 miles away.

This was the third sighting today, and the first two instances were not particularly amusing. A group of about 15 of these arachnids had earlier walked into the city zoo and the second one was a group sighting too which was weird for these creatures. Tarantulas are solitary creatures,they never live in groups. The closest contact between tarantulas is for mating and if too slow the female will eat the male.

It was funny that I got to look at one again after three years. My elder brother had kept a male tarantula for a year as a pet. At first, it looked so furry and cute, and out of curiosity I had opened the cage and tried to pet it.

Let me tell you, you do not pet a tarantula. Like you don’t expect to pet your goldfish, you do not pet your tarantula. I learned that one the hard way. I am not only talking about the damage you are risking to yourself but to the poor creature too, because its body and the exoskeleton are too delicate.

My brother had left for college, strictly telling me to stay away from his exotic pet. I was a curious teenager and so as soon as he left Iran off to his room and opened the cage. It was not like I was reckless but, I panicked and dropped the spider on the wooden floor but not before it had shot its Urticating hair into my eyes.

The poor little creature bled to his death in minutes. I ran to wash my face and did so vigorously.

First day I felt nothing but a bit of itchiness around my eyelids and face, but after a night’s sleep my eye turned dark red and swollen.The left part of my face was swollen too. The next day after my brother had had enough of scolding me and mourning over his pet, he took me to the eye hospital where they had to operate upon me to get them out. I had to stay inside for two weeks after that and tend to avoid even remote contact with these little creatures.

Incidents like the one today re-iterated my feelings of fearand panic from that day. I decided to ignore the incident and go home.

I was desperately trying to push the spider away from my body, and I tried hitting it with a baseball bat but no use. It would not budge, not even move a little. The monster had clasped its claws on my thighs and it was staring me down. This is not right, I said to myself. It raised its fang slowly and pushed it deep into my thigh, I roared in pain. A trickle of tear flowed down my left cheek. In a flash it pulled the fang out and attacked on another part of my thigh, I was in excruciating pain, the blood was oozing out from two big holes in my thigh; I was about to pass out from too much blood loss. I thought maybe this is the end, and rightly so one arachnid took revenge for another. The one I murdered had somehow come back from death to kill me.The eyes of this spider reminded me of my brother’s pet.

The spider loosened up its grip on my thigh, I took a deep breath. Maybe it was done. But, it crawled up on my chest and the fang was up in the air again, this time headed for my heart. I closed my eyes and readied myself for my apparent death.

I opened my eyes and there was no spider, no holes in my thigh and no blood. Although, there was profuse amount of sweat all over my body, it was another one of those, the nightmares. I had had these before as well.

I put my hand under the pillow to pull out the cell phone and turned its screen on, it was 2.45 AM.

The sweating had made me thirsty, and I wanted a change of clothes too. I walked to the kitchen to drink a glass of water and then headed to the dressing room. I undressed to my birthday suit, turned on the fan and opened the cupboard, the air touching my skin felt nice. I picked up another night suit to wear. I turned around after finishing dressing, I saw it.

My nightmare sitting right in front of me on the ground, I could bet my life it was a Goliath bird eater. At first, I contemplated running. But then I decided, not to, maybe this was just a hallucination. I pinched myself to make sure I was not dreaming. Then, it moved. It was indeed real. I slowly moved towards the kitchen. Travelling those ten yards staring down at those fangs and being careful not to look straight into its eyes, I felt I was going to die soon.

I got hold of the pesticide can; it killed small spiders in an instant. It would only be logical it would kill this one too, only if right amount of dose could be administered.

I knew I had to be careful, because I did not want to end up in an OR (Operation Room) again. I slowly closed the dressing room’s door,leaving enough opening for me to keep the spider in the view and to seep the insecticide can’s pipe inside. I took aim for the eyes and the body, and pressed the can’s button, the spider almost leaped at me but I sprayed the killer liquid until the can was nearly empty and the spider lay dead.

I remembered the warnings on TV; I had to report a sighting.It was strange that these creatures had launched a fully fledged attack at the capital of India. I picked up the phone and dialed the number.

“I have a dead tarantula spider in my home.”

“I killed it with an insecticide.”

“What is your address?”

I gave them my address and in 15 minutes I had a team of spidey experts sweeping my house for any more of the big bugs. They took away the corpse of the arachnid and I hoped that was the end of it.