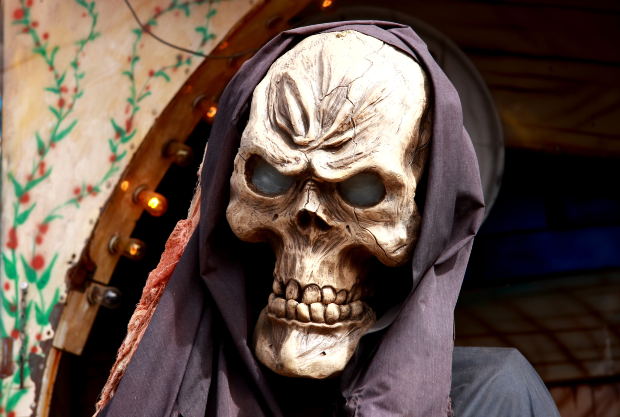 I was sitting at a cafe along the main route running through New Orleans, sipping coffee with a friend of mines. We laughed and joked around until we heard the broadcast from inside the restaurant go off. It came from a T.V. I saw as Nicole and I both turned our heads. It showed a group of people relocating to New Orleans, but I can tell that they didn’t know exactly where they were headed to. I saw a lot of blood and cuts on them.

“Well we can’t risk losing this city…” My friend said. She got up and started stuffing her belongings into her bag.

I said, “Well I’m going too.”
We both got up into the gray SUV, I was driving. We drove through different towns and cities along the way. Far away we came across 3 apartments side by side. All identical to the one I used to live in during my childhood. With that being said each one had enough room for four rentals to be made. The French vanilla one caught my eye; a man down the stairs on the left of the building was talking with another man, probably a realtor. He was probably thinking about buying the whole complex. We drove on I wanted to make it there before night. We saw a lighted community building. An open garage on its left side, the sky was black. I didn’t risk any chances so I parked the vehicle inside of the building. Nicole and I got out of the car and gathered the people together and told them to move diagonal from here, we told them about the benefits and more supplies. They all agreed.

Ashley had brought her coffee along and sat at a cafeteria lunch table to drink it. I sat down also. I told her,

“We have to find a place to stay.”

She nodded her head and we both got up and walked out to check out some of the houses. So we walked and I wanted to check out the apartment that was apparently being sold.

We both heard something following us and Nicole and I ran up the stairs on the right side of the building. The door was left wide open. The moving detector lights came on as we stood on the platform where the door was. I pulled out my gun and turned around, I shot three of them. The other two were shot down also because they disappeared. Nicole had run inside while I glanced at the bodies and ran inside and realized there were zombies here too also.

I found tools to reinforce the door with and bolted the door down so they’ll stay closed. I looked forward.

“There maybe someone else here too, so we may not be alone.” I whispered to Nicole. I began a chant, “Kill the maker.”

Once, being sure I didn’t kill Nicole in the process. A body fell down out of one of the open rooms and we rushed to pick it up. I realized there was another door and it was opened and a zombie was walking in. I shot it while dragging the body and threw the body at the zombie walking in. Both zombies fell backwards off the platform. Nicole was about to rush outside to check on the fallen zombies. I held her back,

“We can’t shoot outside the noise will attract more, so out combat strategy is stabbing.”

Even though the gun was silenced I couldn’t risk the chance. I ran outside and Nicole did too. I aimed at the figure outside by the door; it was too dark to see it clearly.

“We can’t risk it.” I said. “There’s nobody coming up here!” I looked down the stairs. “I guess I could check you then.”

I looked around him he was clean.

“Step from the wall.”

I said and I checked his back, he was clean. But he still was breathing heavily and I checked to see what was wrong. He had a dart through his left breast. I took him inside and pulled it out. Nicole finished reinforcing the windows. The man was an attractive fellow about the age of 20 or 23, he had blonde hair inside I saw it was long with the lights being on. He had a white shirt under his striped blue and white sweater. It was button up but it looked ripped open though.

I began locking up the glass. He kept on saying,

And about three times I said,

I stepped away and waited until they left the door. Before our eyes the zombies were all shot and killed. I unlocked the door and pulled out my gun. There was a large pudgy man, African American. He put up both of his large arms and dropped his gun. I put my gun down slowly.

“Well, I guess we need to get supplies, we got a full house now.”

He put his arms down. “Actually that’s what I wanted to discuss about, and you don’t need to worry about me my place is actually in front of this apartment.” He said.

“Well, since your offering you’re paying.” I said.

We all made our way down the stairs. I made sure the rooms were all locked up. Nicole got into the large man’s jeep. I and the other man rigged up a set of motorcycles and began riding them. We followed the jeep to the grocery store. I made sure I was behind everyone incase anything happened.

We rode up to the store, and dismounted our vehicles. I walked inside first and realized this place hasn’t been hit up by the bad news yet. After the chase today I was exhausted I got into a cart and the man we “saved” pushed me willingly. Nicole got into a cart too.

A janitor stared bewilderedly at us, he stood a close distance. He came up to greet us.

“Look, I know what’s going on out there and you all look like you’ve been messed with. So I was wandering if I could go along with you all.”

I was checking him while he talked he didn’t acknowledge me.

“Sure, but your responsible for your own supplies.” I said.

“Got it.” He said nervously.

“Join the club.” I gestured him. He offered to push Nicole; he said shopping prices were on the house for us so we were covered.

After shopping we drove back home. The large man told us his name was Wade. Nicole said hers. The man we “saved” is Dustin, and the Nick was the janitor. I introduced myself to all of them. I took a liking in Dustin. Nick looked about 28 – 30 years but I’m not the guru of ages, he had medium black shaggy hair. He took off his cap and passed it over to Nicole, Nicole wore it; she smiled and so did Nick. Dustin looked at me in the most striking way then went into the bathroom to shower. Wade had made his way out back to his place.

Nicole gave Nick a room. I sat at the table by the door where I first encountered Dustin. I made sure I was faced frontwards towards the door. Nicole and Nick talked in the room. Dustin soon came out of the shower; he had a dark gray shirt with light gray sleeves and a trademark symbol in red on the center of his shirt. He had a light gray beanie hat on and light blue jeans with black shoes on.

“What you ready for?” I asked.

“Another zombie invasion, what else?” he remarked.

My mouth was dry to the point I was swallowing my own spit.

I stood up from the chair. Then I realized we had forgotten water. I got up quickly and went for the door. Dustin stood up too and Nicole ran out of the room.

“Where you going?!” she asked.

We exchanged glances. Nick and Nicole joined too.

We all went down the stairs again except this time I wasn’t feeling so confident. Dustin and I retrieved our motorcycles. Nick and Nicole went towards the gray SUV. I saw Wade’s place and was astonished. He had reinforced the outside with steel and metal while we had only reinforced the inside. And to think, that a man was only trying to buy this complex about 4 hours ago.

I called to him and he ignored my call, I was 10 feet away how could he have not heard?

“Wade just stay we’ll be back.”

He came down the stairs and got into his jeep. I repeated it again and the vehicles started. Nick and Nicole got into Wade’s jeep. Dustin got onto his motorcycle and I did too.

We made it to the grocery store, walking to the store I knew my chances were being taken. I felt uncomfortable walking into the store the second time. You could say it was the sixth sense. In order to obtain that sense you need a group of minds present thinking the same thing. It certainly wasn’t my group. Nicole and Nick were laughing she was inside of the cart and Nick was pushing. Dustin looked like he was trading tips with Wade he glanced back at me for a second then continued talking. I stayed on foot this time walking through the aisles. Wade began laughing he had a wad of cash in his palms.

“Is anyone up for corndogs?”

I decided to have a little fun maybe I was being too paranoid. I even said okay as well.

This moment seemed familiar like déjà vu that’s when I decided to say.

“Nicole and I agree on lots of things.”

I was laughing referring to pastimes. Then my joy was replaced with a ticking bomb of fear. I had a thought, ‘Maybe it’s good that no zom-‘And my group stopped frozen the same I was too. There it was standing so stupidly watching the orange juice like a kid glued to a T.V. screen.

“Well speak of the devil!” I said.

I laughed a little, “You know I was just thinking that they wouldn’t be here.”

We concluded that this zombie was just a man on the way to the grocery store to buy a carton of his favorite orange juice. He probably was sick because we saw the snot coming down his nose.

Then I heard unfair gruel breathing and not so balanced footsteps. I had started running and my group had watched me. I saw dead hands drop on my shoulders. I ran an aisle with the boarded passenger. I turned around and made it turn around as well so its back was facing towards me. I wrapped my arms around the base of its shoulder so my hands faced me, its arms laid stretched straight out on both ends. I had enough mobility to move up and down.

“Do something!” I yelled.

My group just stared, Wade tried to run the zombie over with the cart, but I was in the way. I realized everyone had left their weapons at the house and that my gun is still in my pocket.

My group saw and knew what I had to do. I folded my hands and crossed my fingers against the back of its head. I started to force its head forward. A rim of bright red was exposed almost like neon because of its gray head. Nick pushed Nicole to the blue titled bathroom which was a nook formed by the two joining isles. They had both became disgusted. I realized I couldn’t push its head forward anymore, and that it might be the end for me.
__

So, This was all based on a dream I had, and I squeezed it hard enough in my head to actually remember it fully and vividly, the only thing really changed was character interactions but everyone was there.