You are here: Home / Travel / I’ve Been Monked! 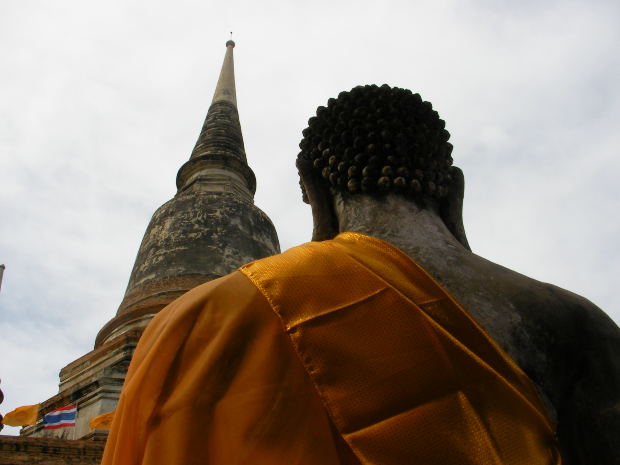 Somehow, all my life-changing experiences have had something to do with travel. Over the years, travelling across the length and breadth of the country, I’ve met some wonderful people, seen the most beautiful things and savored a lot of delicious food. Someday, I would like to write about food but my limited powers in vocabulary stop me for doing that. I believe that you can’t do justice to a write-up on food without an articulate expression that precisely captures thoughts into words.

Coming back to the point of this blog entry, I would like to use this space to express my gratitude publically, for a person who’s restored my faith in humanity. Big words, eh? Read on!

Over the last 2 years, the cynic in me had begun to overshadow the optimist. I had quietly started believing that people are inherently self-centered and being nice was slowly but surely going out of fashion. Yet, this random act of kindness from a monk in Kushalnagar, Coorg District proved to me that still, there are people out there, who in their own little ways are spreading the JOY.

This happened on our return trip from the Stormfest, Coorg which deserves a separate blog entry of its own. The three main protagonist of the story are Ikshit jandial , Kunga Dorjee (the monk) and yours truly!

On our return from coorg, we had stopped at a Tibetan monastery in quaint little town in Coorg district called Kushalnagar. I had never been inside of a monastery before and even if I had been (hazy recollections from school and a manali trip); I don’t recall ever being inside a monastery as grand as that. It seemed magical and I was almost in a trance, of course, with a little bit of help from certain medicinal herbs. There was a small Tibetan tuck shop right at the monastery’s gate and we stopped to buy a couple of interesting things that one can only find at such places. For e.g. there was a wooden device carved into what seemed like a wooden hand, which comes in handy when one has to scratch the inaccessible areas of one’s body :)

Then we set off for Mysore to be in time to witness the illumination of Mysore palace. Indeed, it is the sort of thing that you capture on your camera and put it up as your laptop wallpaper and that’s precisely what I intended to do. As I looked into my bag, a little moment of realization happened. I had done it again! I had forgotten my camera back at the monastery, back at the tuck shop. So, we grieved our loss for a while and then started riding again for home. It seemed like the only blotch on what had been the perfect road trip till now.

Next morning, on a whim, Ikshit decided to look for the monastery’s telephone number and see if we can still redeem something that under usual circumstances should be considered lost. He called a number and with no hope, asked the guy on the other line if he knew about the camera. VOILA!

Mr. Kunga Dorjee, the owner of the tuck shop, was on the other line and after few interrogative question about the make & color, revealed that the camera was indeed there. We worked out the logistics and the camera was delivered 3 days later at my residence in Bangalore. I could not believe my luck and more than that, I could not believe that people can go out of their way to help a complete stranger. Maybe, this is the monk way of life. If that’s the case, all of us need to borrow a leaf out of that book.

As a last note, here are the SMS exchanges I had with the monk

Atul to Kunga : Hi Sir! This is the person who had forgotten his camera at your shop. Please send me your A/C details so that I can transfer Rs. 500 to your account. This should suffice for the courier charges. Thank you so much. Such honesty is rare in these times

Kunga to Atul: I will do that ASAP. Don’t worry I’ll pack your camera nicely and use blue dart to send it to you. I will try my best that your camera reaches you in exactly the same condition as you had left it.

The thing that moved me the most was the little note that Kunga Dorjee had sent with the courier. It said – “Just remember, the best things in life are never lost.”