You are here: Home / Travel / The Moeraki Boulders –The Food Basket of the World 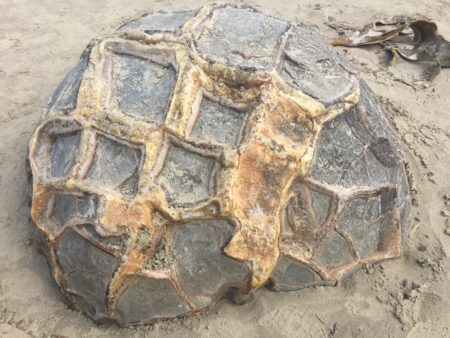 After rendering careful ears to Big Bro’s enchanting stories, I craved to hear more of it, but for the day we both had to snap our online chat because of our daily obligations. And then after a few days the online conversation started again…I was the curious listener and Big Bro the enchanted story teller…the narration went into a cyclical manner and was not a linear one.

“As New Zealand is a land of picturesque lakes, and as we were driving down from Christchurch to Mount Cook National Park, suddenly the turquoise blue waters of the “Lake Tekapo” loomed ahead with her arresting elegance and tranquil resplendence. The raw beauty of New Zealand has remained intact over the years, its natural glory still relatively unaffected, glimpses of which we could see during our drive through the South Island. We stopped in our tracks to take in the beauty of the lake. Tekapo’s blazing turquoise color comes from glacial sediment that was left behind when the lake’s basin was originally formed. Lake Tekapo is fringed by the Southern Alps and as it was a clear day, we could see the Mt. Cook, New Zealand’s tallest mountain, on the other side of the lake. What a sight it was!”

The narration continued without any breaks in between, “Another famous lake ‘The Lake Wakatipu’, New Zealand’s longest lake, gained its fame because it abuts the famous Queenstown, regarded as the adventure capital of the world. Our next stop was Queenstown and off we went on a remarkable journey from Mt. Cook National Park, marveling at its scenic beauty along the way. ‘The Remarkables’, a mountain range and ski- field famous for its much acclaimed part in “The Lord of the Rings”, rises impressively behind ‘Lake Wakatipu’, creating a stunning backdrop for this natural beauty. We took a cruise on the lake aboard the iconic steamship the “TSS Earnslaw”. We stopped at Walter Peak farm for lunch and to experience the famous New Zealand farm life.

I poked Big Bro in between, and repeated, “Oh what a story it is!” Then I lost my concentration, trying to visualize the turquoise blue lakes and awoke from my daydreaming, on hearing Big Bro’s voice again…

“While we were driving along the dazzling beaches in the North Otago Coast,  we had to force stop to see one of the nation’s most enthralling landmarks. You know, in a small fishing village in Moeraki, there is a sandy beach full with almost perfectly spherical boulders. Mind you not pebbles, eh!” 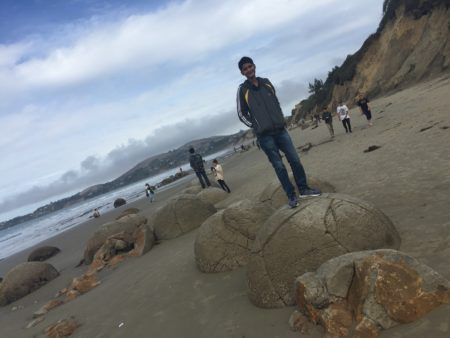 “Spherical Boulders! I have seen the most amazing rock structures in Stonehenge but never heard about these gigantic boulders”, I blurted out in disbelief! Big Bro continued, “Well, according to Maori legend, once upon a time the Moeraki Boulders, now considered to be food baskets were gourds and were actually used by ancient people for carrying aboard, using a famous canoe named “Araiteuru”. Then accidentally and unfortunately, the canoe crashed. Since the native people believed in the concept of Immortality, and they still believe in it…they are happy to think even today that the crash survivors known as “Kumara” in Maori language, were transformed into the area’s surrounding hills, and the large baskets and gourds and eel baskets and calabashes were transformed into gray, round, spherical and semi-spherical boulders. That’s SIMPLE. That’s the genesis story of Moeraki boulders and is locally called “Maori Te Kaihinake”.

“I tried to justify the incident later, with Science and Archeology and after a brief Googling, came to know that millions and millions of years ago, the rocks remained hidden inside the area’s cliffs and they gradually revealed. Then due to years and years of erosion they took the present forms.” Commented Big Bro,

“And what surprised me more was that the legendary story had no written scriptures and any sort of written historical recordings. Whatever we have learnt about its genesis and formation is based only upon Oral Literature. Though the colonial literature after 1850 chronicled this historical phenomenon in the most possible colonial narrative style, however, locals still believe in the oral Maori legendary story and travellers’ from all possible corners of the globe come to see “ The Food Basket Of the World” and had made the place a popular tourist attraction.

Perhaps the “Kumaras” for their good deeds throughout their life have made themselves immortal by the process of metamorphosis in the forms of spherical and semi-spherical boulders. Big Bro stopped for that day.

I snapped the online connection and tried to memorize the story as I realized how we are dependent on written records and how forgetful we are. The Maoris though considered as “illiterates” by the colonizers had such powerful memory that they used to pass on the stories to the next generation by means of Oral Literature. Though millions of years have passed, the colonizers’ recorded history could not erode the oral literature of those simple and brave-hearted natives as they are called, they were as strong as the gigantic rocks and boulders, those brave- hearts to withstand the erosion of time and tide and still remaining Immortal Souls.