You are here: Home / Travel / Off to Southern Alps 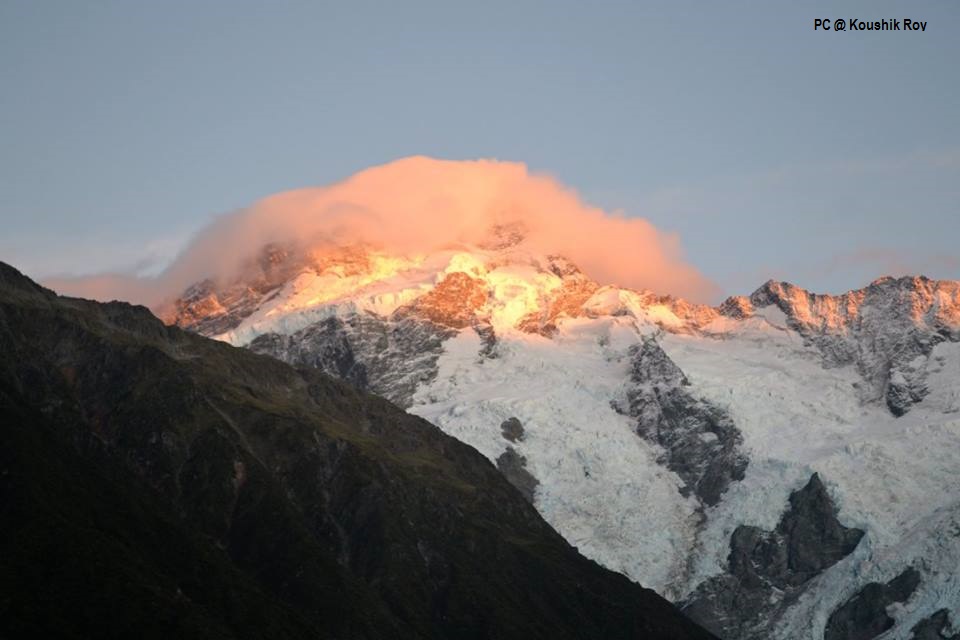 When, Mr. Wanderlust and his family and us started co-habiting as neighbors, our initial feelings was similar to the old age adage “Neighbours Never!”. However, as time flew past, we realized what a gem we had in them, our treasured neighbours nurtured a wanderlust gene within and we had reciprocating minds in turn. Knowing this wanderlust family past a decade is indeed a conceit for us. We come to know about different obscure places through their eyes so intensely which we dare to venture not as often as they do.

Mr. Wanderlust along with his family reappeared this year with a submissive smile as usual and I asked, “Big Bro, Big Bro, where have you been?” “Have you been to London, to look at the Queen?”

Breaking the usual horizon of expectations, Big Bro replied, “Off to Southern Alps, to have a happenstance with the amazing Tasman Glacier, and its Terminal Lake.”

Big Bro paused for a brief while and continued, then after, “Well, can you imagine how exciting it is to pull up alongside a gigantic sopping iceberg, calved off from one of the largest glaciers in Southern Alps? Soft snow landing at the top of the entire mass of glacier as if they were soft cotton balls and you are able to touch it approximately three to five hundred years later as glacial crystals”.

I was thrilled hearing those words and thought I heard the wrong words, then I pronounced, “Three- to- Five Hundred years later! That’s quite pre-historic!”

I have only seen the dripping icebergs drooping and breaking an enormous ship and that too in a much acclaimed movie during my entire sailing period in the Stream of Life. And then I had a retrospection within my memory and the idle workshop came back to its active form only to speak in a heavy eroded voice, “Oh no! You have also seen in the silver screen a series of Ice Ages.” I replied promptly chuckling in embarrassment, “Oh yes! Such a short- term memory chip I have inside my cranium. That’s true we have all seen dripping icebergs in a series of movies.”

Big Bro, continued with the usual sombre tone in his voice, “After an uplifting half an hour walk to the Terminal Lake of the Tasman Glacier, our guide whisked us in a steady boat and we were about to explore the melting ice-face of the Tasman Glacier and icebergs that have calved into its cloudy and murky waters. The lake feels extremely spooky as the boat cruises slowly for an hour or so. You can hear the sound of silence while sitting inside the boat occasionally stretching out your gloved hands to touch the freezing water and the large chunks of broken iceberg crystals in feverish excitement. While cruising around the lake our competent guide took us from one point of interest to the next. 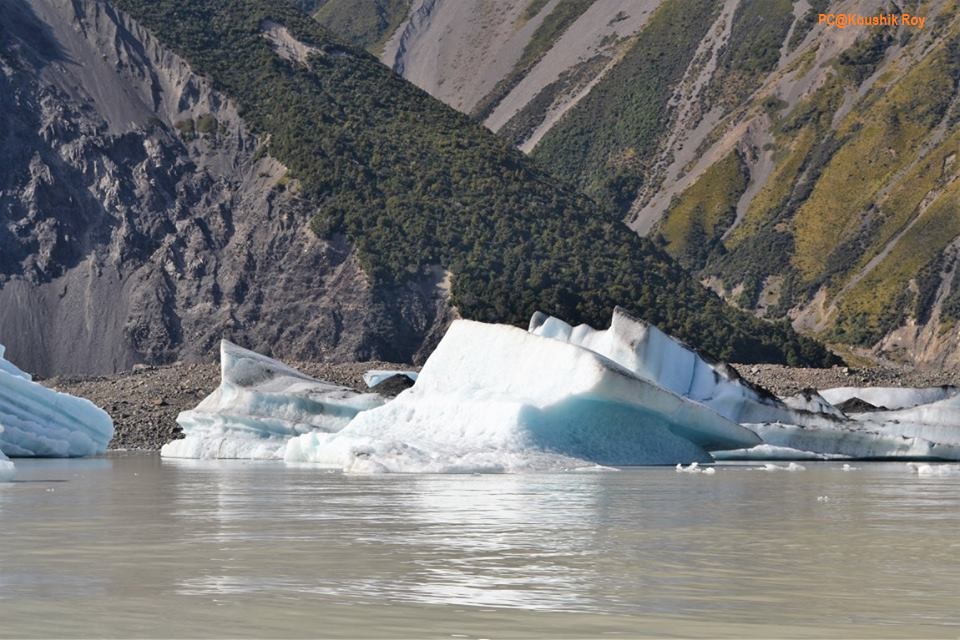 Lending an ear to our guide who was imparting the history of the glacier, the Terminal Lake and Mount Cook National Park as well, I was getting drowned with those thoughts of mine within myself, what was the place exactly three hundred years back, and was wondering about the quietude of the place. It was uninhabited with only occasional tourists and guides, what a marvel of nature I wondered as my teenage son was busy clicking random shots of the spectacular beauty of the place.”

“Our next stop-over was Mount Cook National Park, which in local language is called Aoraki Mount Cook”, continued Big Bro. The centrepiece of this National Park is the highest mountain peak of the Southern Alps, namely Mt. Cook, named after the famous globe- trotter James Cook. “We had spent a couple of nights here at the iconic Hermitage Hotel Chalets, to feel the awkward and gawky silence of nature more accurately and stargazing in the huge expanse of the clear night sky, which seems so close to you.”

“The morning sun came up with a fresh halo, wishing us ‘Hello’ in a smiling golden coat and the morning tea felt like something heavenly in the beatitude of Nature,” continued Big Bro.

Feeling the moments, I uttered “My Good Lord give me another 100 years to live…to taste the beauty of Nature, sip by sip, and allow me to drink it to the Lees…wish my cup is never finished.” …

“That was the morning prayer I too uttered before sipping my morning cuppa,” said Big Bro. “The sunrise as viewed from the National Park was exquisite, as if thousand golden suns were bursting into flames and radiating fiery golden colours throughout the sky. The day passed in a relaxed pace with us, soaking the gigantic presence of the Mt. Cook so near to us and awesome scenic beauties which we loaded to the fullest in our minds’ camera and in the shutters too. My son who is a shutter-bug captured the exotic beauty at random till his fingers ached clicking the ‘press’ button. The multitude of mutinous colours in the sky where the Southern Alps stood with all its might dumbfounded us. The ice-capped Southern Alps with its sunlit aura was ravishing.”

“At the departure time we were all in low-spirits, as all departures have a sad tune associated with them. After packing and preparing for the next scheduled program, I glanced at the Southern Alps, for the last time from the eastern slopes”, spoke Big Bro. I could see the sad tune of parting still reflecting in his eyes. Mr. Wanderlust then responded, “Well you can’t really sit and clutch your boat at one place, you have to continue rowing for the next trip.”

I waited impatiently for the next part of his trip and was almost fantasizing about the snow-capped altruistic Southern Alps, standing there for years and years, embellishing each day with frozen icicles and snow in all its frozen form displaying its magnificent beauty to global travellers for ages past, ages present and ages still to come.

As narrated to Mahua Banerjee, by Mr. Koushik  Ray, presently employed in Singapore.