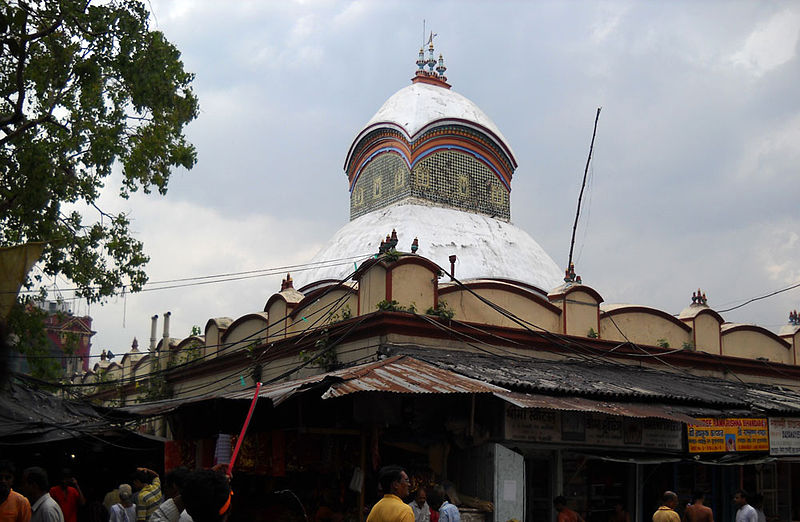 As soon as the exam of my grandson and granddaughter was over, they expressed their desire to see some worth seeing places of Kolkata. I was too tired to move anywhere. They did not listen to me and emphasized to visit at least three important places – Kali Ghat – Kali Temple, Victoria Memorial and Birla Planetarium. They persuaded their grandmother who telephoned me immediately and asked me to take them and show them some of the worth seeing places of Kolkata as I had no urgent work in hand to execute. Now I had no reason for refusal to my wife.

We came to Metro Station at Esplanade and bought four tickets for Kali Ghat.Within a few minutes the train arrived at and we boarded in it. It was so crowded that we did not get seats, we remained standing. Even then we were happy as it was fully air conditioned. And not only we but many ladies and gentlemen were travelling like us also. We felt relaxed all along our journey. At every station the door was automatically opened and closed within one or two minutes. The passengers had to get down and get into very quickly.

We got down at Kali Ghat Metro Station and hired an auto. We reached the temple area and through a narrow passage reached in front of the temple. There was a long queue in which men, women and children were standing in raw and turn by turn seeing the goddess Kali, praying, worshiping and coming out . We also stood up in the queue and after waiting for an hour or so our turn came. We had red flowers ( java flowers which Goddess Kali likes most ) and prasad in our hands. We prayed for happiness and peace in life. We worshipped too. We sat down at a prominent place from where the Kali Temple could be clearly visible.

With our folded hands we prayed , “ Sarve sukhinah bhavantu, sarve santu niramya ” ( All should be happy , all should be free from disease )

Shubham and Monika wanted to know about the history of Kali Ghat Kali Mandir ( Temple ). I briefed them that the temple is about two hundred years old. It is one of the 51 Shakti Piths of the country. It is the center of faith and belief of the Hindu. Many people come here every day to see Goddess Kali. It is said whosoever worships Her with true devotion and dedication , his or her desire is fulfilled. Most of the devotees are Bengalis who have immense faith in Her . Every year a grand Kali Puja is celebrated with enthusiasm. A large number of devotees come from all parts of the country during the period of different festivals like Durga Puja, Kali Puja, Lakhi Puja and so on.

Nanaji ! we don’t see any ghat , even then it is popularly known as Kalki Ghat.

You are right. With the pace of time and change in course ( direction ) of the Hooghly river the Ghat does not exist now. This temple was situated at the bank of river Hooghly nearly two hundred years back. In course of time the Hooghly river changed its course ( path ) too far away from the temple. But the name remained the same as Kali Ghat. Now it is popularly known as Kali Ghat Kali Mandir ( temple ) as known earlier at ancient time.

The history of Kali Ghat Kali Mandir ( temple ) is very old. It was situated in a dense forest in a small hut. At that time Kolkata was a big center of trade and commerce. Traders & businessmen used to come to Kolkata and its adjacent trade centers through the Bay of Bengal ( whereinto the Ganges fall ) to the Hooghly river and at its Ghat they stayed , bathed and worshiped Goddess Kali in the belief/faith that they would get what they had thought of with the blessing of Ma Kali ( Goddess Kali ). It was the result of their sheer faith and belief that in most of the occasions their desires / wishes were fulfilled due to which the traders and businessmen halted at the Ghats , took holy baths and worshipped Goddess Kali before going to their destination for trade and business. With the increase in population and development of the areas we find changes in many things but the place is the same even today where Kali Mandir ( temple ) was situated in ancient period.

Though the Ghat is not visible , yet it is popularly known as Kali Ghat even today. It is situated in southern part of Kolkata and all necessary transport facilities are always available from Howrah, Sealdah , Kolkata , Shalimar Rly. Stations and bus stands. Metro rails, trams, taxies and autoes are readily available round the clock to go to Kali Ghat from within and outside the city. Kali Ghat Kali Mandir ( temple ) is one of the most important religious places of Kolkata in West Bengal . It is an iconic symbol of faith and belief of the Hindu.

“ Nanaji ! when did you visit and see Kali Ghat Kali Mandir for the first time ? ” – Monika asked.

“ Please tell us about anything you still remember . ”- Shubham added.

Your grand naniji and your naniji were inside the mandir ( temple ) waiting for their turn for worship but I came out quickly after prayer. I sat beside a saint and started talking to him. He looked quite differently from all other sadhus ( Saints ). He was very strong and stout. He had a big head with long hair lats as if never combed for a long time. He had a dhoti like dress from his waist in geruwa ( saffron ) color. His whole body was naked. He had big eyes sparkling with some super power.

He kept his hands on my head and uttered something and told , “ Now your tiredness disappeared, will feel energetic henceforth, can take your family enthusiastically wherever you like.

I felt so energetic that I ran to thelawala, brought a dozen of bananas and offered him. Immediately he returned back half of the bunch and asked to take. Since my family came out of the temple, I wanted to depart with him. He kept his hands on my head once again chanting a shloka which I got by heart. I touched his feet wholeheartedly and left for. Whenever I looked behind I realized as if he were all along with me.

Of course !When I sat at the same place, I realized as if he were sitting beside me and wanted to say something to me.

No sooner did I lie down to touch his feet than he had disappeared. I was so disappointed that I started chanting the shloka in order to pacify the burning desire to see and talk to him once again.

Why not ? but there is a condition.

What is that ? we agree to abide by in Toto.

You must get it by heart and henceforth every day after getting up and before going to bed you must repeat it five times regularly.

Thank you , Nanaji ! – Shubham and Monika said to me. After taking tea and snacks we left for Maidan Metro Station by the same metro rail.