You are here: Home / Travel / A Trip to Vaishno Devi 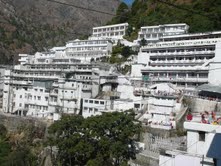 Vaishno Devi is one of the very popular religious places of Hindus in North India. And every North Indian Hindu wants to visit it. I also wanted to visit that place from my childhood but could manage time to visit only after many years, after attaining 25 years milestone in my life. In fact it’s not time I should blame — staying near around Delhi for four years I never visited ‘Tajmahal’ and ‘Qutubminar’. I think some time we are lazy and careless enough to not seriously take places and people “near” to us.

During September 2007, I was working in Bangalore for an IT company. One day I received a call from my friend from Delhi that one of our common friends is coming from USA next week and they had a plan to go to ‘Vaishno Devi’. Bell rang in my mind to let me avail such golden opportunity and join them for this long awaited trip — I would not only meet with my friends but also visit Vaishno Devi. 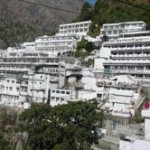 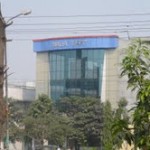 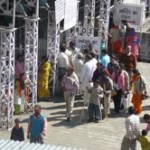 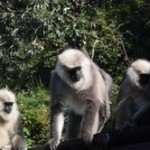 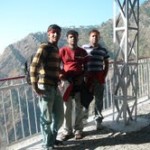 I knew that sick leaves are meant for such abrupt plans in IT companies (pun intended), but I tried to be honest and asked for two days (Thursday and Friday) leaves from my manager, so that I can club it with weekend to get enough days for the journey. As usual project, I was working, was in Red and in very critical stage. In such situation even if you don’t have any pending work you have to be with the team for moral support. Obviously my leaves were denied.

I pressed-hard my manager and finally on Wednesday evening I got leave for only one day (Friday). Thanks to Air Deccan I could able to book my flight tickets in my limited budget in such short time. I reached Friday Night to Noida and same day late night both of my friends arrived with rented Toyota Innova — we need a big and strong Car for 600KM+ Journey on Indian Road. I was not worried about the budget etc since our NRI friend was there with us :-)

We started late night around 11 PM, and our driver wanted to cover as much distance as possible during non peak traffic hours. We stopped around 6 AM in the morning at a lodge and took 3 hours of short nap freshen up and started our journey again. In USA you find Walmart, and in India we saw Walia Mart. We followed Noida – Delhi – Sonepat – Panipat – Karnal – Kurukshtra – Ambala – Ludhiana – Jalandhar – Pathankot – Jammu route.

We reached Katra early afternoon and started walking for Vaishno Devi temple. We had to cover around 14 Km of journey. Whole place was very calm and clean, every 1KM there is small rest area where you can take rest. Music legend Gulsan Kumar had really done wonderful job to develop that place.

In route we met with a group few people coming back from the Temple. They gave us ticket for “Ardhkuwari temple” because they were in hurry and could not wait for the time allotted. This temple is in very small cave so there is always time slot given to visit mainly to avoid rush. We were lucky – we had not to wait. We reached on time and got chance to visit “Ardhkuwari temple”.

It took around 4-5 hrs for us to reach Vaishno Devi Temple. We kept our valuable in free lockers available. Like every temple in India there were lot of Monkey present near around temple, but they were not creating any problem for the visitors. Temple was managed very well – no Pujari (Priest) was pushing any one for special or different type of Pooja. Long queue was managed very professionally. Temple was not crowded during that part of year and we could able to complete the Darshan in one hour.

After some time we started our journey back to Katra. While coming back we realized why people say you should start yatra (walking) in the evening. Lot of people was coming in the groups chanting “Jai Mata Di”. Under light whole route was looking so beautiful and the atmosphere was very spectacular.

While coming back I was almost dragging my legs but I was very satisfied that one of my long waiting wish got fulfilled on such a short notice. People in north India use to say when Devi Mata will call you, you will always find the way to reach her, and it seems very true for me. Jai Mata Di