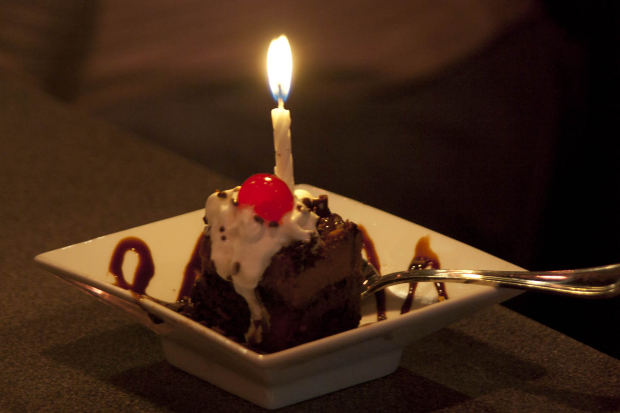 “Common Manoj …it is already 12..at least now allow me to enter the room. It’s his birthday today”. Mrs. Rai shouted battering the closed door.

“Just wait my dear… I am giving final touches to my hard work…Don’t go anywhere, just  five minutes”. Her husband replied in ecstatic mood from inside.

As he opened the door Sobha, his wife pushed him and rushed inside.

“What…got astonished…?”  Said Manoj seeing his wife awestruck by decoration he had been doing in Jai’s room for last 10 days.

She couldn’t respond and kept staring at many framed photos of her son Jai which her husband had put on walls all around the room from his childhood to till date.

“It is first time that Jai is not here on his birthday so I took full liberty to make this day perfect. What do you think-will they like it?” Manoj asked his wife proudly.

“They will love it but where you got so many photos of him”. She questioned.

“Where else, don’t you know I am his close friend on Facebook and some from our albums”? He said holding his shirt’s collar high.

“And what you wrote their “.Pointing towards a yellow velvet cloth pinned on center wall with words in golden colors written on it.

On your birthday, we want you to know that you mean so much to us. We cherish every single moment spent with you. Thank you making us the happiest parents of this world. Happy Birthday Son.

“It seems that Jai has made you really confident in English”. She continued.

“Indeed. You remember after our Chemist shop ran out of business, I joined as Medical representative but couldn’t sell even a 1000 odd rupees medicines. I used to feel scared of standing and explaining anything to doctors because of my low confidence in communicating in English. But when that day Jai caught me reading his grammar books and I confessed my problem. Two months Sobha, in two months a standard seven guy changed his father’s confidence.” Manoj said with a profound mood.

“Yes I know very well for those two months I couldn’t sleep. All night he would be teaching you and in morning the very moment newspaper guy dropped paper on door, you started reading it so loudly that even the neighbors had stopped their subscription of newspaper for two months”. Sobha said with a teasing smile.

“See how happy Jai and Anita looking in their copycat T Shirts and jeans which they bought on last Valentines Day” . Manoj said pointing at a picture placed on table next to their family picture.

“Undoubtedly she is. Do you remember how Jai used to keep playing with children of half of his ages just to peep into the windows of Mahapatra house where she would come for tuition”. They both laughed remembering those moments.

“And how he made a story of his poor friend unable to pay tuition fees and took Rs 500 fooling us to give Anita her birthday present”. Sobha added smilingly.

“That girl really made him so happy and responsible. I never thought that a reckless and carefree like Jai will make his way to IIT Roorkee that also in first attempt. Did you invite Anita or not?” Manoj enquired.

“Of course yes she only came  with me to market to buy all things for Dishes”.

“Madam, Every thing is ready. Should I bring the cake here?” Paarvati, their servant asked Sobha.

“Did you prepare all dishes Sobha? Jai wants all his favorite cuisine on his birthday. Khir? “.Manoj asked Sobha.

“Yes”. She replied while placing cake on a round table.

“I didn’t prepare it thought they eat it everyday so why today? “.

“I told you that please prepare everything which Jai like. If some of his friends ask uncle aunty Jai loves Dal Fry Didn’t you prepare that. I told you… I told you 100 times”. Suddenly his voice turned deep. A deep anxiety was on Manoj’ s face.

“Ok sorry just Calm down. Don’t go crazy. I will go and ask Paarvati to prepare it”. Sobha called Paarvati and told her to prepare it.Suddenly door bell rang.

A girl in T-Shirt and jeans smiled “How are you Uncle?”

“I am great Anita but why your smile is looking so weak. Wow if I am not incorrect then u r wearing the Valentine Dress you people bought.” Anita didn’t reply and went inside to help Jai’s mother.

Soon other friends also joined them. As Door rang again Anita return with a guy to Jai room where everyone was waiting sitting and chatting.

“Uncle this is Ramesh from IIT Roorkee?”

He came and greeted jai friends and parent.

“So nice to meet you, Ramesh. Jai talked a lot about you.  But we tried to call you many times that either you were not picking or your mobile was switched off. We thought you must be busy with your study”.Manoj tried to look as happy as possible.

“I am sorry Uncle I didn’t have the courage. When I informed aunty about Jai over phone, she started crying and yelling that why you let him go…why you didn’t stop him…what kind friend you are. I became scared and ashamed. I really telling you uncle I tried to stop him but you know na he always did what he liked”. Deepak burst in to tears.

“That day on waking up I saw him packing his bag. When I asked where he going he replied that he is going Kedarnath before going home. He wanted to bring Prasad for you. His exam was over and I had one paper so he didn’t ask me but uncle I told him that weather is not good and they forecasted of heavy rain. He just ignored me saying bad weather means fewer pilgrims so he could return soon. I had to stop him adamantly. Its all my fault. Had I stopped him more forcefully he would have not died”. Jai’s father hugged him.

“Don’t say that. He is not dead. He is just missing. I know him. He is a great swimmer. No river can drown him and athlete too. You people have seen he could play football all day without even taking an hours rest? How any landslide could trap him in their grip? No…not possible. He can’t die. He must have injured himself and recovering somewhere I know him.” And Manoj himself broke down. Jai’s friend and Anita tried to console him.

“Hey it is already 1 P.M. let’s cut the cake. Anita come and cut the cake, you are the person whom he loved the most “. Sobha tried to divert the topic.

“No Aunty, It is you both whom he loved most always. Please cut the cake “. Every one joined Anita insisting them to cut cake.

They sung together birthday songs for Jai as two empty souls cut the cake.

P.S. -To the families of thousand missing people in Uttrakhand disaster (in India, 2013) who still hope that someday their loved ones will come and knock the door of their happiness again.