You are here: Home / Family / My Behaviour and Mother 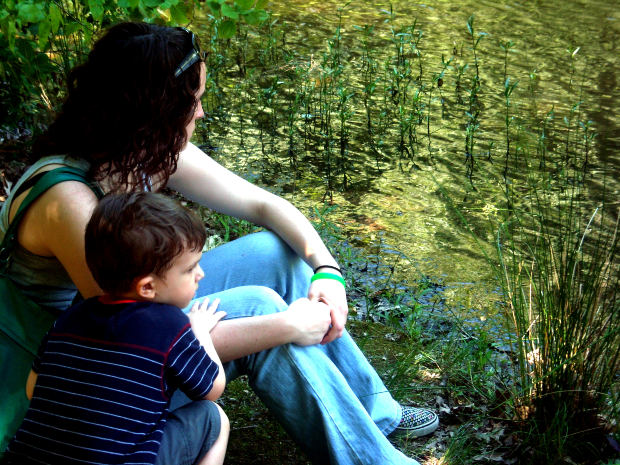 The clock had struck midnight and I reached out to my pocket for my lighter and lit up a cigarette. The smoke twirled around in the air and slowly memories started to flash before my eyes.
“how many times i have to repeat the same thing maa… dont you understand”
“I am just asking son”
“i have told u na once..”
She smiled and then went away to kitchen.

During shopping:
“Enough of roaming from one shop to another, why dont you buy from a single shop instead”
She said nothing but just gave a smile.

Few days later:
“why dont you stay for a few more dayz,i dont think your classes will start so soon”
“nah.. i have to go”

Next day:
“have a safe journey and take care of your health”
“i knw maa.. you dont have to say it”

Two days later:
“yes rahul.. what is the matter.. why are calling at this time of the day”
“your mom have slipped in the bathroom and have suffered a fracture… leave for home early”
“oh god.. yeah i am just leaving”

Little did I know that time, what I was going to witness. Huge crowd had gathered in front of my house which was unexpected. I made my way through the crowd while those pale faces were glued at me as if they were trying to
console me through their expressions. Fear had already stricken my mind and I didn’t want to step forward. I wished I could stop the time as I never wanted to witness the scene that the destiny has stored for me. But had destiny
been with me this would have never occurred.

I gathered some courage and moved forward and could see a body covered in white clothes lay in the floor. I looked around and found all my relatives sobbing except one…my mom… where is she… I searched again and still could
not find her. My friend rahul came forward and narrated how my mom was hit by a vehicle in the market place and met with a tragic death while she had gone for shopping. He asked for forgiveness for lying about the fracture incident but I didn’t have any patience left. I moved forward pulled the white cloth, and could see the same expression on her face as she used to show when I would be arrogant.

I controlled myself and didn’t weep, only when I lit her funeral pyre I realized my life would never be the same again because I had lost that person whom I have never showered the love she deserved.

Why does it always happen that we realize the value of the person only when they leave us. I too loved her and had a deep respect for her but I couldn’t show. The only thing I gave her was my arrogant behavior. Many a times we do
this to our mother, knowingly or unknowingly as it had always been in my case. The word “MAA” is said to be the heaviest word on earth but little do we put much weight on that person. We forget she gave us life, raised us better than she had been. Even in her wildest dream, she never wish unwell for us. She gives up all for us and forgives our mistakes. There is no way we can repay her… as children the only thing we can do is give her time and respect. But I couldn’t give any. The only thing I can do now is pray for your well being wherever you are, and work hard so that I could achieve what you always wanted me to be… A GOOD HUMAN BEING