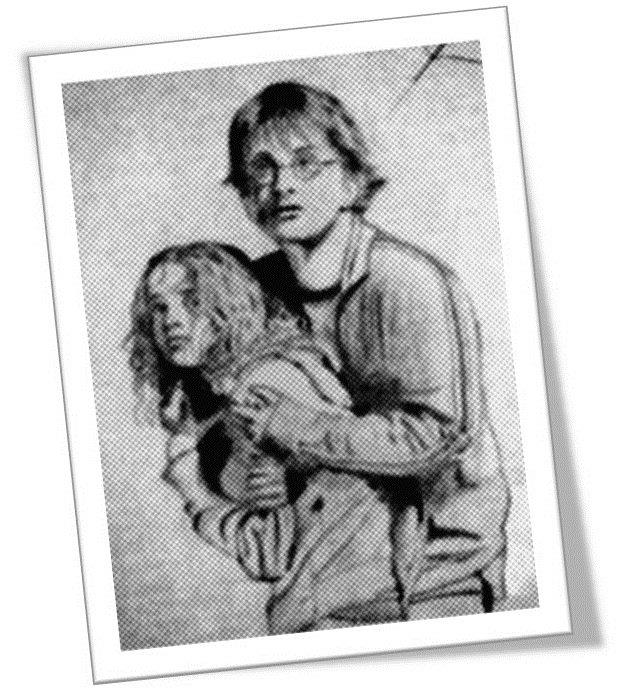 My father shook his head and removed the thermometer from my mouth. He showed it to me. 101 degrees Celsius. No wonder I didn’t feel well.

“Well, who asked you to dance about in the rain like that?”my mother asked.

“I wasn’t dancing!” I retorted. “I was on my way home and it started raining. What should have I done? Taken shelter under the stinky roof of Prem Uncle’s crowded dhaba? I would have gotten malaria, dengue, jaundice or god knows what.”

“I had asked you to take your umbrella to school in the morning,” my sister said. “Why didn’t you?”

I opened my mouth to snap at her when the top of my forehead turned red and I slowly slumped back into bed.

He sighed, my mother groaned, my sister frowned and my little brother cackled evilly. He burst into fits of laughter and fled from the room before I could box his ears. Dreamer, our golden retriever, shook his head and left. The rest of my family followed.

My sister ran into the kitchen where my father and I sat eating our breakfast. She looked as if she was about to have a seizure. She pulled clumps of hair out of her head and screamed.

“Sis,” I said cautiously, for she was liable to explode when in such moods. “Are you okay?”

“No,” she said, shaking with her attempts to cool her anger. “No, I am not okay. How can I be okay? The biggest exams of my life are a week away and my books still haven’t arrived!”

“To help me prepare! I had ordered them online five days back. They were supposed to come yesterday evening! Today, I called the online service and they’re saying that no such items had even been ordered in the first place!” my sister raged.

“That’s funny,” my mother said, appearing from the bathroom. “Are you sure you had ordered them?”

“Yes,” my sister said. “I mean, well…I had selected the items and was waiting for the page to load when I received an urgent call to come to college immediately. So I had asked Ana to wait until the page loaded and then place the order.”

Everybody turned to stare at me.

“What?” I said defensively.

I rushed up the stairs and stood in front of my bedroom before yelling “I forgot!” and disappearing inside.

Somehow, my favorite stuffed animal disappeared that day, and I haven’t been able to find it since.

I opened the door and allowed my friends to enter. Natasha was dressed up like a pirate, Sonia as a pumpkin and Minnie as He-who-must-not-be-named from Harry Potter. They looked me up and down. I was still half dressed in my bumblebee costume.

They shrugged and plopped onto my bed.

“It’s a busy night,” said Sonia. “We might as well set out as early as possible.”

I quickly finished dressing and grabbed my pillowcase.

“So, are we just gonna stick to our neighborhood or go to main street too?” I asked.

Minnie stared at me.

“Dude, I haven’t eaten all day!” she exclaimed. “If we don’t get enough candy for my breakfast, lunch and dinner, I’m gonna become a cannibal!”

I smiled and the four of us hurried downstairs. Just as we opened the door that led to our happiness, my sister grabbed my shoulder and pulled me away from that freedom. She scowled at me.

She was still angry about the whole ‘unordered textbook’ drama. But she passed with ninety seven percent and topped the class in all her subjects, so I can’t see why she was so upset.

“You’ve gotta take Alex with you,” she said, shoving our brother toward me.

I grumbled and held his hand, walking outside with the rest of our group. We went around the entire neighborhood and reached the high school. A huge haunted house had been set up there. My friends shrieked with excitement. I turned to my brother.

“Stay outside,” I said. “You might feel really scared if you come in. We’ll come back and fetch you.”

He nodded and stood by the entrance obediently. I entered with my friends. It was really creepy and scary but I protected everyone from the monsters and even punched Frankenstein who actually turned out to be my sister’s classmate and fifteen minutes later we were standing outside the school campus.

“That was fun!” screamed Minnie.

Trish and I nodded as Natasha checked her watch.

“We’d better get back guys. I wanna finish all my candy before bed!” said Natasha.

We trudged back home. I waved bye to everyone and walked inside. Humming a lively tune, I settled down in front of the fireplace to go through my treats.

“Did you get a lot of good stuff?” my mother asked.

“Yeah,” I grinned. “Everything’s pretty awesome. Alex got a lot too.”

“Speaking of Alex, where is he?” came my father’s voice from upstairs. “He hasn’t finished his homework yet.”

“He must be somewhere about,” I replied, unwrapping a mint candy.

A moment later, there was a frenzy of frantic knocks on our door. My mother got up and opened the door. Alex stood on the front step, bawling his eyes out. He ran into my mother’s arms.

“She left me!” he cried. “Ana left me at the haunted house! I had to find my way back here! I was lost! She left me!”

“How could you do that?!” my father yelled.

My sister came out of the kitchen, licking her chocolate covered fingers.

“Forgot!” Everyone said together.

Isn’t it great to have a family that knows you so well?

I hurried into my parent’s bedroom and switched on the light. I jumped into their bed and opened my mother’s eyelid. She blew on my face and shut her eye. I tried tickling my father but he merely shooed me away and turned onto his side.

“Come on guys!” I cried, yanking the covers off of them. “We haven’t come all the way to London on this special day just to sleep! J.K. Rowling is signing books at the public library today!”

My parents ignored me. I shook them awake.

“What’s wrong with you people?” I yelled. “Don’t you wanna get there ASAP?”

“Dear, let’s skip it this time and do something else instead. How about we go sightseeing? Alex and Kira will like it.” my mother said.

I stared at her. This woman obviously didn’t know what she was talking about.

My parents sighed and got out of bed. We had a quick breakfast, left my sister in charge and headed out the door.

“Are you sure you want to do this?” my father asked. “I mean, we can always do it some other time, if not today. Let’s go on a Harry Potter movie studio tour instead.”

I gaped at him.

We reached the library in twenty minutes and stood in the line. Five minutes later, my mother shook my shoulder and told me it was getting late and we’d spent too much time there, so it was time to go back to our hotel.

We had reached the front of the line. A minute later, I would be looking at the face of a genius! I turned to my father.

He hesitated before saying, “I know you’re not gonna like this, but when you had asked us to pack the book, it was very noisy and hectic and we couldn’t hear you properly and so-”

“Look,” my mother said. “It’s just that with all the confusion, we kind of…well…”

My parents looked at each other.