You are here: Home / Family / ITS JUST YOU AND ME MAA-PART 2

READ THE FIRST PART ON
https://yourstoryclub.com/short-stories-family/its-just-you-and-me-maa-part-1/ 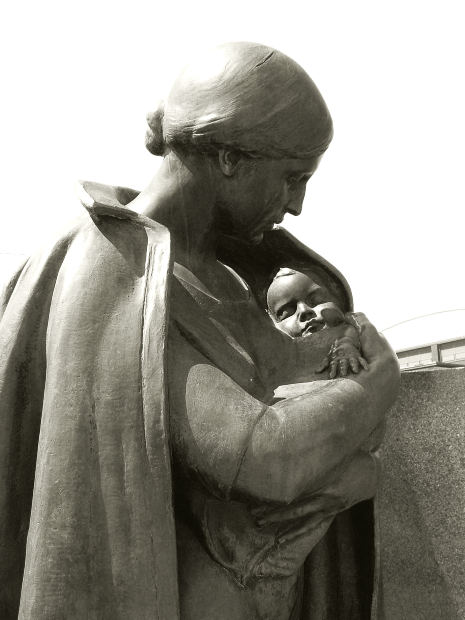 Family Short Story – ITS JUST YOU AND ME MAA-PART 2
Photo credit: duane_j from morguefile.com

“Stop wasting my hard earned money by giving food to random people, don’t you know how hard it is to earn money. Fool. Your mother left a nuisance on my head in the form of you.”

“Get up and go to the fields quickly otherwise you won’t have any meal today.”

“You know what I am really proud of Kaami he has made me proud, I’ll send him to the nearby city to study more and become a big man there’s nothing in this village for him.”

“Bhavesh I can’t afford to educate you anymore. Passing class 12th must have been hard enough for you.”

“I am missing my Kaami today, I wonder if he has adjusted to the city life.”

“Bhavesh I told you it’s no use distributing food on your mother’s death anniversary-she’s gone leaving a burden like you.”

The past 2 years had been filled with these words which Bhavesh took in quietly without uttering a single word against his father. He had long ago buried his dream of becoming a business man-My little Bhavesh will be a famous Businessman, that’s what mother used to think. Bhavesh had grown up a lot in the last 2 years- taking care of the fields, cooking and cleaning for his father had become a purpose of his life now. And Parth had sold part of his land to educate Kaami. He sent him off to the nearest city which was actually 18 hours away, so he spent most of his time drinking and abusing Bhavesh, waiting for his beloved elder son to come visit.

Why Parth hated Bhavesh so much was a fact not known, everybody pitied the young boy who had to suffer so much so early in life-People started telling that he was his mother’s apple of the eye and father’s thorn in the flesh, but besides talking nobody came to his rescue, his granny also passed a little time after her daughter’s demise maybe she couldn’t take the shock that her young daughter was no longer with her and that too just because of lack of treatment.

Meanwhile Bhavesh bought old books with whatever money he had and used to sit up late and acquire whatever knowledge was trapped in them, he was very fond of studying and always dreamt he would become the businessman he mother wanted him to be but luck didn’t favour him.

On the other hand Kaami took a long time to complete his studies, forcing Parth to sell most of his land to fund his education in the city. After 6 years Kaami finally qualified and landed up in a job, that day was also unforgettable.

“My son Kaami has graduated today and no one can stop me from drinking.. Today is the happiest day of my life and I will celebrate it. Here Kaami , take this money and buy new clothes for yourself.”

“Thanks a lot Dad. Should I get something for Bhavesh?”

“Hahaha, are you joking son he doesn’t deserve anything. You go ahead.”

Kaami had pitied and noticed how thin Bhavesh had become in all this time. He went up to him and said, “ why aren’t you congratulating me on my success, aren’t you happy.”

“ I am brother, I really am but I would have been more proud of you if you had achieved this success earlier, dad wouldn’t have to part away with most of his fields. he has nothing now but a small piece of land left and that’s not enough to cultivate too.”

“Ufff..Dad was right you don’t deserve anything. Sit there and rot.” , saying this Kaami angrily stared at Bhavesh and went off.

Bhavesh’s life had lost its purpose, he didn’t know what to do he was living only to fulfil his mother’s last words. So he took up a job in the village post office, whatever he earned Parth would snatch it from him and spend it on drinking. Kaami returned back to the city and promised to send Parth some money every month but that promise was never fulfilled and Kaami got so busy in his job and the busy city life that he sent a telegram to his father saying that he hadn’t any time to come to the village so he married a girl there only and settled down. Parth still never spoke a single word against Kaami, drinking and abusing people had become a part of his daily routine and bringing him home and feeding him had become a part of Bhavesh’s life.

Once heavily drunk Parth told something that shattered Bhavesh completely, “ You aren’t my son you know. If your wretched mother’s sister had not died along with her husband we wouldn’t have to take care of you. Your parents ran off committing suicide leaving a burden on our heads and your mother taking the entire responsibility of you… What the hell..I had told her to leave you with your old granny but she insisted on keeping you here. I hate you stupid boy.”

The whole night Bhavesh couldn’t sleep-if what he had heard was true, then why his mother had hidden this from him and why did his parents commit suicide, why did Dad not tell this before. All these questions kept adding to the heart ache which was already burdening him. How could he live with this pain anymore,how!!

“Give me some money Bhavesh, do I have to beg you everyday.”, Parth said the next morning red eyed and acting like nothing had happened the night before.

“ Am I really not your son?” Bhavesh asked timidly.

“Will you give me the money or you want a thrashing.”

“Good good, give it fast and by the way I never lie when I am drunk.”

So, it is the truth I had been pitied on by my mother and forced on my dad. Days went on into months and Bhavesh continued the same routine but this time he was living a truth that had been hidden from him for so many years and that was killing him from inside.

The only bright point in his life was a tea stall near his hut where he used to go just with the excuse of meeting the tea stall owner’s daughter Anokhi. She made him smile and forget his worries, she was there when he needed someone to talk to and she always supported him no matter what happened.

Jayesh, the tea stall owner was Parth’s close friend and told him about Anokhi and Bhavesh’s closeness.

“ You don’t understand what I am telling, do you like Jayesh’s daughter?”

Maybe Parth wasn’t that bad, maybe he’ll talk to Jayesh uncle about our marriage tomorrow, maybe I’ll be able to pick up life from where I had left it. All these thoughts were going on in Bhavesh’s mind the entire night.

Early next morning Parth wore clean clothes and smilingly went out. It was past 6 in the evening when he finally returned.

“Where were you dad, I was so worried. Why are you so late?”

It was like a living nightmare Parth married Anokhi and that too in the village temple after persuading Jayesh that he would give the remaining piece of land to him and Jayesh being a greedy drunken man agreed to this proposal immediately. Bhavesh was left with nothing at all.. Life had stopped and he didn’t think twice before standing on top of the well.

“Yes son, come here”, and Bhavesh felt warm to be embraced in his mother’s arms, what a soothing feeling it was, he was waiting for this moment from the time he had found out he was not really his mother’s son.

“Maa, I fulfilled your promise, I have left dad with someone, he is not alone.”

“I know son, I know. Don’t ever feel that you aren’t my son, you are and you always have been. My sister and her husband were completely in debts and thought taking their lives was an easy option. I was and always am there for you Bhavesh.”

Smiling at her peacefully he said, “ I know Maa, you’re always there for me. Thank God I am no more in that cruel world. Its just you and me Maa.”