You are here: Home / Childhood and Kids / Tall and Strong 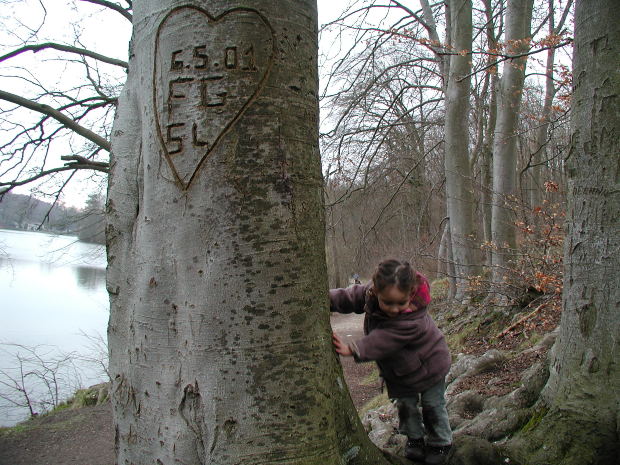 Eight years back, you were a tiny five year old girl, clutching the hands of your parents as you entered the greenery. I knew you wanted me from the minute you saw me. You let go of your parents’ hands and jumped up and down. The store-owner came over, put me in a bag and handed me over to you.

You took me home and carefully planted me in the soft earth in your backyard. You covered me with dirt and watered me every day. After a few months in your care, I started growing. The top of me broke through the soil and I finally saw the sunlight.

I think it was your birthday that day. You were in the backyard with your friends, sitting in a circle, playing duck-duck-geese. Your laughter was so lively, it rang through the neighborhood. The next day you came to check on me and when you saw that I had risen above the ground, your joy knew no bounds. Every day after school, you sat with me, sang songs to me, read your four-page storybooks to me.

And as you grew, so did I. A year later, I witnessed your seventh birthday. Someone gifted you a doll. You named her ‘Cherry’ and brought her with you whenever you came to play with me. You were getting a bit taller. I myself was sprouting branches and was about twice your size.

One day, you were hanging from my branches, when Cherry slipped from your grasp and fell to the ground. In the attempt to grab hold of her, you fell down too. You scraped your knee.  Tears poured from your eyes and I tried my best to comfort you. I wiggled my branches and one of my apples fell into your lap. You smiled and bit into it. A few months later, your mother bought you a bicycle and I watched as you practiced riding it. You were getting better every day.

One day, your friend came over and you both sat underneath me, enjoying a little tea party. A few months later, you fed me a large piece of cake – or rather smeared my trunk with a lot of icing – as you celebrated your eighth birthday, with your friends. Someone gifted you a Nancy Drew book. You spent days in my shade, reading it. A week later, you didn’t come to visit me. I thought you were ill, but I heard your father telling your mother that you had gone on vacation with a few friends and one of their families. I thought you might’ve at least come to say bye to me, but never mind. I knew you were excited. After you came back, you leaned against me and finished the Nancy Drew book. You got up, blew a kiss at me and left.

Many months later, you had your ninth birthday. Your party wasn’t at home, but in the new multiplex theatre across the street. When you came back home, laden with gifts, you merely smiled at me and went inside the house. I was a bit hurt, but assured by the fact that you hadn’t completely forgotten me. A week later, I saw you spend an entire Saturday morning outside in the backyard, dancing to the music, which played from the new iPod someone had given you on your birthday. A friend came in the evening for a sleepover and you spent the weekend building a tree house in my branches.

A few months later, you were riding your bicycle when a boy from the house opposite yours accidentally bumped into you, sending you into the ground. I was prepared to wiggle my branches again, to send an apple into your lap, to stop your tears. But you didn’t cry. You stayed strong and steadied yourself by hanging onto his outstretched arm. One day, a few months later, you climbed my branches and entered the tree house with a couple of your friends. But I noticed something different. You weren’t holding Cherry anymore. I spotted her a few days later, lying in the garden, clearly untouched for quite a long time. You started working hard in school and could only manage to visit me for fifteen minutes each day. I missed the hours we spent together, but no matter, you were a busy little girl!

A month later, you turned ten. Your face glowed with happiness. Your age finally had two digits. You didn’t glance at me during the entire party. You were busy laughing with your friends. I saw a large group of children that day. Some were the usual friends who I see almost every week. Some were new. There were a few boys as well. You all sat in a circle and played Truth or Dare. I think you had forgotten about duck-duck-geese. For the next few months, you started visiting me only during the weekends because you were so busy with your schoolwork. Sometimes, you only visited me for a minute or so, after which you would run away to talk with your friends over the phone. You sat down next to me one day to paint your nails. It was a nice blue color. But you didn’t speak to me at all and simply stood up and walked away.

A few months later you climbed into the tree house again. It had been abandoned for many weeks. I thought you would stay to play, but you gathered some books, climbed back down and went to your friend’s house. Another couple months later, an eleven year old girl stood in front of me, getting prepared to leave for her birthday party, which was to be held in the mall. You hadn’t visited me for days. I was still the same. Tall and strong. But you had completely changed. Things weren’t the same anymore. I waited for you to come and at least look at me, if not talk and I knew you wouldn’t play. But you never came.

One day, your group of friends came over to your house. You chatted and danced and had fun. A boy came and grabbed onto my branches. It was windy, and he suddenly let go, falling to the ground. You came and yelled at me. After they left, you sat in my shade and listened to music on your iPod. A few months later, I heard you crying because your friend ditched you. Important exams were coming up for you and you were almost always studying. Your birthday came a few weeks later and you turned twelve. I saw you cracking jokes about your teachers and high-fiving your friends. A girl made a nasty comment about the principal but you merely laughed. A boy grabbed some tissue paper and wrapped it around me. You didn’t say anything.

Dust had gathered on the tree house, Cherry had long since been given away, your iPod had been replaced by an iPhone, your pink bicycle had been spray-painted dark blue, you hadn’t visited me for months, you grew distant with people who used to mean everything to you, your school, friends and music had become your life and you were no longer the innocent five year old I had first met. Your dark hair fell to your waist, your lips were bright red and I could catch a hint of eyeliner somewhere above your eyes. As you got up to get a drink, I saw in you a different person, not my best friend anymore, but not a complete stranger either. For I had watched you changing. Tomorrow, you will turn thirteen. A teenager at last! You are growing up, and as you grow, so do I – Tall and Strong.