You are here: Home / Childhood and Kids / Unjustified fare for baggage 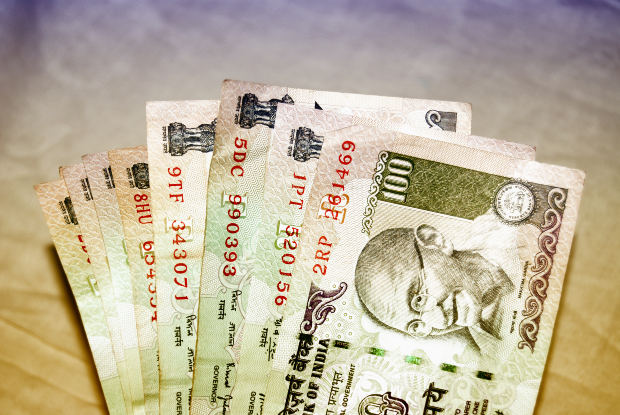 Once Swapnil needed to go to Bangalore for some days, for office work. He completed his packing quickly and also booked a train ticket. The day came and Swapnil started for going to the station. He knew he has three options to go to the station. One is by bus, the other being by cab and the third is the break journey. Now break journey would be cheaper but would really test his tenacity of carrying this weighty baggage and travelling in huge crowd. Now cab would naturally be much costly than bus. But he was not willing to spend so much for him alone. He thought with a small baggage and himself alone, he could well manage in bus. So he quickly boarded on bus, which would directly go to his intended station.

As he boarded the bus, the conductor told him that he needs to pay 30 rupees in extra for his baggage only, and on top of that 10 rupees as his fare for the journey. Swapnil though was stunned, but still recovered soon and managed to get a seat at the side of the driver. He kept his baggage near his foot. He thought that this baggage doesnt take a space more than that of another person, whether kept on floor or on a seat. So how come that he needs to pay 30 bucks for it. He should pay the same fare that he has to for himself and that is 10 rupees. He decided he wont pay much more than 20 rupees. So he started thinking of a trick in which he could get rid of this trouble.

He quickly took out his money purse from his back trouser pocket and just taking out forty rupees, kept inside his shirt pocket and the rest of the money he kept in his trousers ticket pocket and emptied his money purse thus fully of money. Then kept his money purse back again in back trouser pocket and sat down. He actually took out four 10 rupee notes and kept in his shirt pocket. He took out two of them from there, leaving behind another two which were comparatively a bit old. The other two good notes, which he took out, he kept in his right trouser pocket. Then he took out the notes in his shirt pocket and one by one for each note, he once folded the notes horizontally and once vertically and tore the middle, for a short length, escaping everyone’s notice by very casually, not paying attention to those notes in particular and just keeping in mind, taking the notes below his knee and guarding with 3 fingers of his left hand, and performing the act with his right hand and rest two fingers of his left hand. This actually tore the notes in middle making 4 cut marks emerging from the centre of the notes to all four directions.

He then again kept back those notes in his shirt pocket. Then after sometime, when just a couple of more stops were left for him to reach the station, when the bus stopped at one stop, he asked for some water to the driver. The driver forwarded his water bottle towards him. Swapnil took the same in his hand and started waiting for the bus to start again very perfectly, so that noone could suspect that, by just pretending that he was able to see something special outside and he felt more important to keep looking at that for sometime till the bus starts again rather than missing the sight of it and drinking the water. Then as the bus started, he tried to drink and intentionally dropped a lot of water in his shirt pocket, pretending to be unable to keep balance when the bus started and his hand shook while holding the bottle to pour water in his wide opened mouth from a bit top. He immediately took the bottle away from his mouth and stopped trying to continue his pretention of drinking water anymore. He cut his tongue and returned back the bottle to the driver. He knew the notes got wet as he wanted and so he dint take them out anymore to confirm.

Till all this time, whenever the conductor asked for the fare from him, Swapnil told he would give him when he would be getting down. As he was about to get down at his stop with his baggage, the conductor demanded 40 bucks in total from him. He quickly gave those two notes taking out from his shirt pocket and then was about to take the other two notes from his trouser pocket. The conductor seeing those two notes completely drenched and torn from middle, immediately complained of the same and refused to accept those notes. Swapnil in the meantime took out the other two notes from his trouser and gave those to him as well to make it 40 as he asked for from him. The conductor took the latter two notes and returning the first two, demanded to give other two. Swapnil took those and took out his money purse and showed that he had no more money. The conductor thought what’s the use of taking such notes which he cant make anyone else take rather would complain in a similar fashion like him. So he left those two notes and tried a couple of times more to get other two notes from Swapnil in turn.

Swapnil also each time replied showing his empty purse and trying to explain that he has nothing other than these four notes and that he would be meeting one of his friend in the station, who would be bringing money for all, collected from all and gathered with one person, as they were together with few more friends going for a tour to somewhere for some days, and that friend of his acting as an accountant of all the friends’ contributions. The conductor hopelessly took those two good notes only and left the other two with Swapnil and went away.