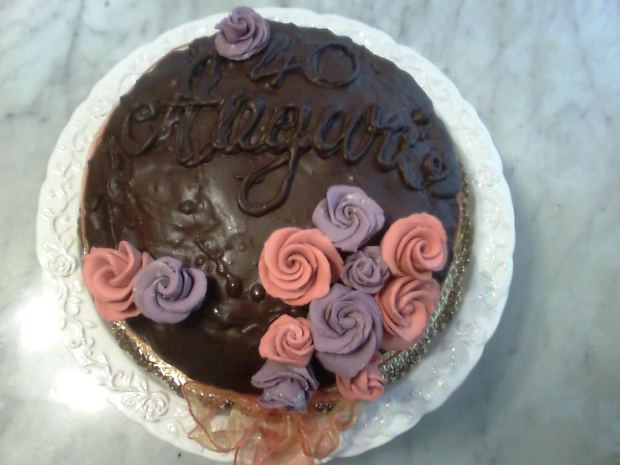 Priya, Richa, Sushmita, Gayatri and Laira were sitting in the school canteen eating Bun-butter-jam, and while they ate, they talked, giggled, laughed sharing jokes and funny incidences. They were all teenagers studying in the same class. They were Laira’s good friends and were very good in their academics too. As Richa picked up the last piece of bun, she looked around and as her eyes fell on the small TV on the wall of the canteen, she suddenly nudged everyone and said “look.” They all looked at the TV that was showing a birthday party with a beautifully decorated cake on the table.

The scene changed on the TV and Richa turning to the others said “Friends, how about a trip to the cake shop this Sunday?”

Sushmita and Laira said “Why not? it would be a wonderful outing for a Sunday. We could go to Prince Charles Cake Shoppe where they make the BEST cakes.”

Priya said “Prince Charles’ cakes are too expensive.. though they are the best in town I agree.”

Gayatri said “We can all pool up the money and buy a small cake and share it.. hmm.. so then friends.. the plan is fixed. We will all meet at 4:30 pm at Gayatri’s house since it is nearer to the shop from there.”

Having made the plan they proceeded to their class and that day’s routine.

Sunday arrived. As pre-planned they all met at Gayatri’s house, pooled their contribution at 25 Rs each (total of 125 Rs) and set off to Prince Charles Cake Shoppe. When they reached the Shoppe they found it very crowded. They managed to squeeze in and place their order for a 125 Rs cake which was not too big.

Now they waited silently to get their parcel. The others asked Richa to collect the parcel tell her that they would be outside the Shoppe waiting for her. They went out and then suddenly after around 15 minutes or so, one of the cake boys handed over a large bag to Richa saying “here is your parcel Miss.. and here is the change as he placed 400 Rs into her hand.”

Richa’s heart beat fast as she pocketed the money and she came out of the Shoppe and joined the others. As they started away from the Shoppe, Laira saw Richa very excited and asked her “You look very excited Rich, what is the matter?”

Richa told them then that the shop salesman was a foolish fellow. He had given her a “BIG” cake and Rs 400 too.

Sushmita said “Richa did anyone see you taking the 400 Rs.”

Priya said “Wow!! what a piece of luck.. a big cake.. a reward for placing the order… and nobody can identify you since it is so crowdy and nobody watched you coming out with it. Hooray!!”

Laira now spoke “Richa you WERE being watched do you KNOW?.. and you have not done right Richa. This cake belonged to someone who paid 600 Rs for it as the price tag says .. and probably they must have given a 1000 Rs note, seeing that the salesman gave back a change of 400 Rs.. by mistake to YOU instead of to whoever had ordered it.”

Richa said “Lirry.. I assure you NOBODY NOBODY watched me.”

Laira shook her head and said to Richa “Richa..you ARE wrong.. God watches everything we do though he is invisible to us. So if you give that parcel and 400 Rs to me, I will take it back to the shop.”

Richa pleaded “Lirry.. come on!! let us enjoy the luck that came our way.”

Laira said “If you are not going to do as I say, I am sorry friends I cannot join your cake party today.”

They all liked “Lirry” and so reluctantly they yielded.

Laira made her way back to the Shoppe, met a FAT elderly man there who she thought was the manager and explained to him what had happened. The FAT man stared at her as though in disbelief. Then he said “young lady, I am the owner of this Shoppe. Call your friends. We will meet in my office right now.”

Laira went out and told her friends what had transpired between her and the shop owner and said they must go meet him at his office now. The other girls hesitated. They were in panic.

Richa said “Lirry.. you have put us all into trouble unnecessarily.”

Laira said “well.. we MUST face whatever comes. So let us go.”

So with fear of uncertainty looming large on their faces after hesitating for 10 minutes, finally they knocked on the closed office door of the office and heard a voice say “Come in ladies.” The fat man sat behind a large table. He asked them all to sit down. He spoke with a smile now “Girls.. I am proud of you, especially Laira. I am this shop owner as well as a preacher too. I ask people to fight the “devil” in their minds and walk on God’s track. People hear this but sadly NEVER practice. Today when I heard Laira tell about what happened, I was overwhelmed. Here was one young lady who told the “Devil” to keep his “temptation offer” to himself. Laira defeated the Devil’s intention and walked God’s track of honesty. I am impressed with your “friend” ladies”, he said pointing to Laira as he turned to the others.

“As a token of appreciation for Laira’s honesty, I want to make your cake party even more enjoyable. Please accept this parcel of Prince Charles’ BEST cake and also share this big pack of chocolates amongst you”.

The Fat shop owner smiled lovingly “Dear.. would you refuse something offered in love and appreciation from an elderly man?”…

Laira was touched at that. She hugged him tightly and said “Uncle.. you are the nicest person I have ever met.”

The Fat shopkeeper’s eyes were moist. He said “God bless you my child. Go now, and do visit Prince Charles Cake Shoppe again. Bye bye all of you.”

As they bid him “bye” and left the place, all others were now in praise of Laira. Richa said “Lirry.. what a fool I was. YOU were right Lirry. God WAS watching both you and me.. and HE was happy to see you say NO to the devil. After what happened just now, I will remember that GOD DOES REWARD the people who walk HIS track and who can say “NO” to the temptations of the devil”.

All others agreed. They all did have lots of fun and enjoyed every piece of the wonderful Cake and chocolates from Prince Charles Shoppe.. and returned home feeling happy with their Sunday outing having learned something nice and good.

MORAL: There is a Super Power out there not visible to human eyes but one that is watching our actions all the time. We call this power “God” and many have experienced that when they walk the “right” track… always good and great things happen to them either sooner or later… and those to get “tempted” to do the wrong things …may get a few moments happiness but then great sorrow later on. Hope you readers liked this story too. :)