You are here: Home / Editor's Choice / The Boy 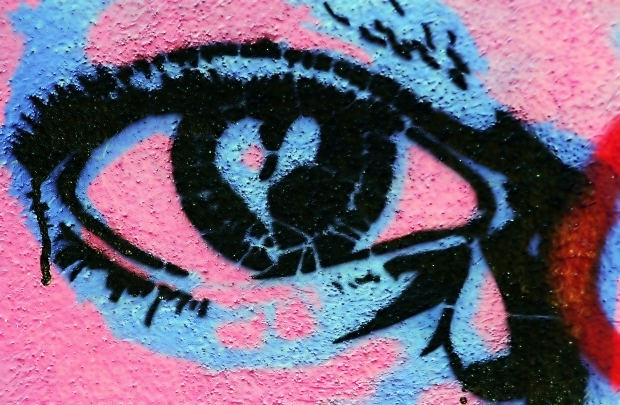 Who was he? He was just one among hundreds at school. There wasn’t anything distinguishing or mighty about him – he was good-looking all right but it was the kind of good looks that stands out at first and then fades into the background after a while; as if it had been there for all eternity. In short, he was an ordinary boy leading an ordinary life. He wasn’t popular among his peers except maybe for his first few days at school which was one month after term began. He knew everyone and everybody knew him and that was that. After all, what was one boy among so many others?

Who was he? He was a quaint black and white photograph. A ready dimpled smile, a pair of deep searching eyes, a mop of messy hair and to complete the picture you needed an easel with a canvas on it near him, a palette in his left hand and a paintbrush in the right. No one knew much about his likes or dislikes and frankly no one bothered to ask. But one thing about which everyone was on the same page was that he was born to paint. He wouldn’t be complete without the – preferably – green streak of paint which his hand leaves in its wake in a futile attempt to get the tumbling mass of dark bangs out of his eyes. It could be 6 a.m. or 6 p.m.; you wouldn’t find him without paint spread randomly on his hands, smudges of colors on his face or dried smears on his sleeves and patches on his jeans. It was an irrevocable part of him. The sagacious aura about him and the contrasting impertinence profound in his ever smiling face vanishes the moment he gets a paint brush in his hands. His countenance radiated magnanimity and unbelievable passion when he painted.

It was a marvel – the indescribable grace with which his hand flew across the canvas, the deft stroke of his hands, true and sure against the stark contrast of white in the backdrop. It was with the utmost confidence that he painted the bold reds and the pale pinks, warm yellows and cool blues, calm greens and vibrant purples… Upon closer inspection you can appreciate the sharp details and the accurate strokes, appropriate shading and expert shadows. Some of his paintings were fairly straight forward- blooming flowers, crashing waves, looming mountains and towering skyscrapers. Some were more allegory – a haze of colors, the meaning of which was oblivious to all except him. They were all beautiful in their own separate ways and the adoring way in which his lips wrapped tenderly around the usually silly names of his masterpieces and the rhapsodical glow in his dark chocolate orbs as he looked at them only added to their charm.

He was neither a fiend nor a best friend to one. He was simply meant to be. With a character that was smooth and warm and capable of easily familiarizing with the personality of his acquaintance. Never was he judgemental  He was a constant friend; Like a diary. You don’t hate him nor do you love him but essentially he is there by your side. What else could be the reason he was never appreciated duly for what he was worth? It was almost like he was meant to be; something naturally there.

Even still, when all of a sudden he barged into the class one boring English period and announced that he would be leaving, it was met by apathetic shrugs which were too mild. On his part, he too seemed indifferent except for the strange emotion shining through the hard pool of placidity in his eyes and the absence of his signature whimsical smile which usually graced his lips. The deadline came and he left with a wave of his hand, a grin in our direction and a slight inclination of his head to acknowledge our lazy goodbyes. But again his façade was undoubtedly marred by that eerie light behind his eyes.

Days flew by with no perceivable change and then the rifle was reported triggering the beginning of a saga of confusion. He became a seat left out in the conference room by a – later, very bewildered- classmate, an extra question paper at every exam, an awaited disgruntled groan when art class was cancelled, a subtle glance at a vacant seat when the teacher spoke about medieval arts, an additional mars bar at every birthday, an irrelevant invitation to every party. It was all inevitable.

That was when we learned the truth of the words: we don’t know what we have until we lose it. Like many unfortunates, it was too late for us; Too late to say sorry for all the times you knocked over his paint, thank you for the paint stained helping hand which seemed to appear magically in front of you when you tripped during gym, a nod of acceptance or perhaps even a reply to every routine good mornings, a heartfelt congratulation as he walks back to his place amidst admiring albeit also lukewarm applause after being announced the winner of a painting contest for the umpteenth time.

Who was he? A pang in the heart when you skip his name during attendance, a tear in the eye when you see your school album, a smirk on the lips when you reminisce about the all jokes you played on the teachers, a confused sweep of the head when you try to seek him out to ask- as was routine – his calculus exam marks, a droop of the shoulder when you realize you won’t be playing soccer with him anymore, a soft feeling in your soul when you see a painting.

A phone call with no answer, that ends in a beep, a message with no reply even at the end of many a week, a mail with no response no matter how long you wait. A foggy picture constantly at the back of your mind.

Who was he? Oh, he was just a boy. The last piece of the puzzle. He was a part of us.