You are here: Home / Funny and Hilarious / HEART ATTACK 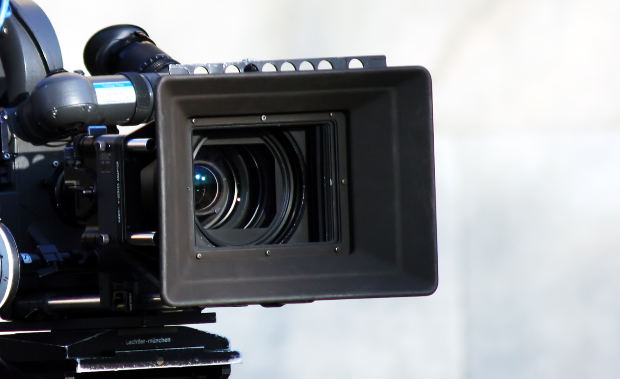 “Good evening, ladies and gentleman. My name is Orson Welles. I am an actor. I am a writer. I am a producer. I am a director. I am a magician. I appear onstage and on the radio. Why are there so many of me and so few of you? – Orson Welles”

Bob is a new director. His dream is the magician making him an actor, a writer, a producer, a director and his friends or relatives who are acting or working in his debut film (title not ready) are thinking that Bob is really a magician. Bob has a friend by name Nick who is a millionaire by birth and he promised Bob to finance his debut film and he also promised him that he will not take any adverse result of marketing the film as he is not worried of losing money in one or two films made by Bob, what he likes much is Bob’s name and fame to spread on the entire globe as the best director, yes, the best…

Nick said he will not appear as producer or financier. As an actor and writer Bob already got fame and this is his first step as producer and director Bob’s face flushed with excitement. He is successful in influencing his friend and financer. So the major task is accomplished.

His first debut film is getting ready. Only few scenes are left to shoot. If he is capable of doing those few important scenes, the rest is just showing the film to buyers and making the necessary steps to get the film released.

As Bob the director to get the fame from all over the world! Few days left to see the glorious days of Bob to come true!

Six boys, they are all under the age of six to eight. But all are like with the same height. They are in tight cowboy dresses. They look like young rebellions. There are guns in their hands. They are ready to attack on…(not known attacking whom!) Their faces are red, redder and reddest. They are very angry. They look very confident on attacking and winning the booty.

As the director shouted with great fury as if he is attacking and as he looked like he is living in those six young rebellions, the little boys marched in a chorus to attack. One boy missed the line.

The director Bob took his towel on his shoulder and wiped his face. He cried again with fury… JUICE! … MANGO JUICE! …

The boys thought… something wrong. Is it with them or with the director? They don’t know. So they too sat before camera as if the five minutes relaxing time is allowed. Two of the boys took lollipops from their pockets and enjoying the juice of it before the director Bob finish his juice.

Clad in a flowery green shirt, Bob enjoyed the juice slowly. All the unit looked at him with boring looks. But Bob is the producer-cum-director of the film. So he is the master and commander. Nobody should have.any complaints on him, only praises as many as anybody can wish.

“That was indeed a great performance of repute in the little boys!” the costume director Dick said with confidence. He remarked as he helped the boys who are really doing their best.

“I am glad you think so,” Bob said in a soft, melodious voice, “I don’t differ!” He smiled as he regarded Dick’s confidence as his applause..

“I am honored to have you in our team; besides, you have made these boys like real rebellions. Nothing like the costume I have complaints. I will like just to make the boys go in a line with coherence and attack.”

The Senior Assistant is Parker who hurriedly ran to the boys enjoying their lollipops and alerted them. He explained particularly about the coherence of walk and got them ready for the shoot. The boys reluctantly abandoned lollipops, took their unloaded guns and stood in coherence to attack as soon as the director cries.

Director Bob is ready now. He got enough stamina with the juice and so he looked at the unit and cried like a mad dog… LIGHTS ON! CAMERAS ON! He immediately cried again with out any late… ATTACK !

The director shouted with great fury got from mango juice and he is feeling he is really attacking with the gun in his hands. He looked really like he is living in the six little boys and this time the little boys marched in a chorus in coherence to attack. The other side is just a machine gun and it started sending bullets on the six little boys.

Oh God! The boys cried as if they are shot by someone, the boys fell down, blood is oozing from the bodies of the YOUNG REBELLES. Claps from every one of the unit are resounding there. SHOUTS!… APPLAUSES!…

“Thank you, Mr. Parker. I know I have chosen a great assistant… I am now not afraid, not at all! The success is ours! Any doubt?”

Mr. Parker came forward and shook the hand of Bob. “Thank you Sir, I am proud to work with you and I have no doubt about our film getting great success, you are a genius Sir!” Parker said as usual.

“But I request you not to let the feeling of nervousness rule your conscience. It will be very fine. I am sure, in fact I trust your abilities completely.” Parker added Bob’s confidence a high tag. “I promise I will not let you down.” Bob said with usual confidence

Just then came in Tom, the light boy. He never cares anyone in the unit. Even the director also. Bob looked at Tom sharply.

“That fool!!! I hate him…I hate him completely!!!” TOM SCREAMED “What happened? Who is that fool?” Bob asked with patience.

Tom’s face is red with anger. He is unable to even speak NORMALLY. He said,“ Who else, the manager, It’s Bernard! You know, he is your brother-in-la!”

“LEAVE ME ALONE!!! Bob said. He saw Tom as a cruel killer. He hated someone to speak about Bernard. He is not willing to hear anything from Tom He looked at Mr Parker and asked him to do something to stop Tom from speaking anything rubbish.

Parker took Tom with him closing his mouth with his palm and disappeared from there within seconds. Tom is not happy with this. “BUT Mr Parker… it is very important. You must hear!…” the Senior Assistant Parker finally accepted to hear what he wanted to say.

“LEAVE ME ALONE!!! You are all my backstabbers, all of you!!!” the Manager Bernard said with angry.

Parker is like the lamp with no power. He wants to scream with great pain, he even could not scream.

“Bernard, it’s me, your close friend and director’s well wisher. Hear what I say. Run fast now. Hide somewhere. Then we all do something to save you…” the Senior Assistant Parker said as if whispering with him.

“YOU ARE ALL JUDT STAFF! WHO YOU ARE TO GIVE ME INSTRUCTIONS ? NOW…PARKER…I AM THE BROTHER-IN-LAW OF DIRECTOR! YOU HAVE TO RUN, NOT ME !!!” the Manager Bernard shouted in high pitch with anger in his tone. Parker is looking at him half mad and he is thinking what to do now.

Director Bob is in relaxing mood. Somebody came and informed that the parents are waiting for the payments. “What Bernard is doing? Ask him to pay them and send them immediately! Shooting is finished long back and the payments should be done by this time! …” Bob said with normal tone.

“Sir! Mr. Bernard is in his room. He is not coming out. We have been trying to make him come out, We are unable to bring him out sir! …” One assistant said with unknown anxiety.

“Why? What happened to Bernard? Is he sleeping with a girl inside his room? Useless fellow! Where is Mr Parker? Ask him to meet me immediately…” Bob said as if he is shouting. His voice is fierce and very harsh!

Everything looks as a mystery. So Bob asked that the cashier should meet him immediately. From nowhere, the cashier came out and saluted the director. Bob asked him to make the payments to the parents of the little children and send them.

The cashier is silent. He did not move from there. Bob viewed him seriously. He thought that they forgot to withdraw money from Bank and so they are worrying.

“What is the amount of the payments? …” Bob asked him. He said the figure. “Bring my briefcase! I will give the amount. You can return tomorrow after you draw from the Bank. …” Bob said with patience.

“There is no problem with the payment, The payment is ready to distribute…” The cashier said in a cool but mysterious voice.

“Then what is the problem?” Bob asked without patience.

“Sir.. the problem..the problem is made by Mr Bernard sir. He ordered real bullets in the place of dummy. So All the children…” The cashier is weeping.

“Dead?.. Oh God! Some one call the lawyer!” Bob said and collapsed.

“Dead?.. Oh God! Some one call the doctor!” Cashier shouted and fell down.

HEART ATTACK IS NOT UNCOMMON IN CERTAIN PLACES. IN CERTAIN OCCASSIONS.