You are here: Home / Funny and Hilarious / ‘Orange’ Love 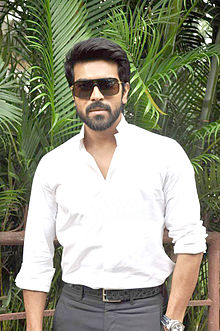 I was playing Chilipiga on repeat for the three hundred and forty fifth time and Anjali got up frustrated.

“That’s it. I can’t tolerate your obsession anymore.” Her patience had obviously withered. “You don’t even know what the lyrics mean!!”

I pretended like her comments were blocked out from reaching my ear due to the music as I watched her get up and move to the front row.

“What??” I gave an irritated reply.

“Give me three good reasons to justify this unusual obsession” She said.

“Three? Too small a quote.  Say ten.” I stated with a large grin.

“I don’t intend to waste my time that much. Make it a seven.”  Anjali bargained.

She sat back comfortably. I took a peek at my watch. I had thirty two minutes before lunch was over. We had a three hour lab session later, and my mind was racing as to how I’d be able to describe my feelings in such a short span of time.

She left me in my comfortable solitary confinement again and I was lost in the flood of thoughts.

Who would’ve thought that a girl like me, who is known for her highly no-nonsense approach in life, lowest tolerance for melodrama and a classic taste for movies without any masala would have a huge crush on one of the top ten commercial heroes of all time?

Yes, the universe does work in a really strange way.

I tried to brain storm on why I liked him. I was pretty sure that it was not because of the fact that I came from a family full of girls or that I spent three desperate years in a college full of girls that my heart immediately jumped at this super hero guy. I knew there was much more to it than that. I started thinking of all the other reasons that could’ve been direct or indirect contributing factors.

He’s stylish; he has a mind blowing sense of fashion. He’s got great eyes.  I swear I feel my heart pound every time he smiles. It’s like the light of his smile goes straight through my heart. Every time I see the words ‘Mega Power Star’ on screen, I get chills. It’s nothing like I’ve ever felt before. Then, there’s his voice. It’s soft and strong, at the same time.  His dance, the most dynamically energetic and majestically graceful movements I’ve ever seen.

Then there’s the fact that I just hate to admit, but it’s the most important of all the contributing factors.  I just love the way he thrashes up the bad guys. His stunts are simply spell binding. Like a captivating firework show.

And this might sound silly, but I just love his name. It sounds very beautiful, like a magic spell. I know people are going to judge me for falling for a guy just because he has a nice name, but I’ve quite passed the fear of being judged.

I usually can’t stand any over heroic acts in any movie. I would end up criticising it very rudely. But when Ram Charan Tej does it, it’s a completely different story.

Even after the bell rang, the thought process wasn’t terminating and I was dreaming all the way to the Microprocessors Lab.

Three days later, on a tragic Saturday afternoon, I was having lunch with my friends in the Cafeteria.

I was caught in shock that I almost coughed out my chocolate milk shake.

Damn. I thought. Now the whole college would know.

“But the other day, you heavily criticised ***** for making such a commercial flick and complained that the standards of Indian movies was going to drains!!” She said in a very loud voice.

I thought she was going to stop with that, but I was wrong.

“Bala, RCT fights in mid air. He throws out helicopters with a single hand. He breaks the villans bones, and makes them spit blood” She continued. “I thought you hated all that voilence!!”

Exactly. I thought to myself again. I’ll never be able to understand myself.

“Bala, he SMOKES in Orange.” She wasn’t stopping. “I thought you hated that too!!”

I was completely embarrassed by then. I had to say something to stop her, or she would end up doing a greater damage to my image.

And then the tragically historic words came out of my obnoxiously talkative friend’s mouth.

I froze.  I realised that I was going to die single.