You are here: Home / Love and Romance / SOMEBODY I LOVE HAS AIDS 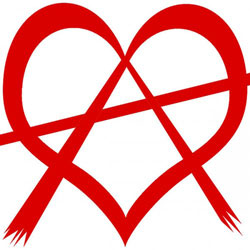 AIDS awareness love story – SOME BODY I LOVE HAS AIDS

We entered the ward at about 7am, she laid on the bed looking very lean. You could almost tell where her bones were. She looked at me and turned her face away. Enyonam, I called out with a broken voice. She turned again to look at me in a very shy manner.

It all started after my sixth-form. I was to visit my uncle, spend the holidays with him till the National Service postings were out. I got to the village at 8:00pm.

I was welcomed in a grand manner, the village type. My Uncle was a Pastor, he came out once he heard I had arrived. He prayed and we exchanged felicitations. His old habit was still with him, he folded one of the trouser pair up to the knee before calling my name, Worlanyo, “have you arrived?” as though I had not.

I respond in the affirmative. He called his wife to attend to me, she entered the kitchen and fetched me water in a calabash. After that, I was served dinner. It was local brown rice and potato leaves stew.

We spoke as I ate, we chatted about schooling in the city, my parents health and my siblings. You can imagine how much talk I had to do in a world bereft of mobile phones. I had to relay information from my dad, and also give out my own information plus comment on some as well.

Soon the “welcome ceremony” was over. I had a good night’s sleep and I think the bed contributed to that. It was a bed made from thatch.

The next morning, I was eager to see my good old friend, Richard, I headed for his house first thing the next morning. He lived at the Northern side of the village where we share a mountain with the Buem tribe.

He was excited at seeing me again after so many years. He had grown beard and his voice had deepened, how fast time changes.

Dzataba! We greeted each other in our own coined word meaning son of the lion.

My time in the village was well spent.

It was during this period that I met Enyonam, she was the shy type and will hardly speak. We met at my uncle’s church. We were to go out for evangelism and were paired in groups of three. I led my group, of course, I had been the Scripture Union president way back in school and was well versed in the scriptures than the other two.

Richard and Enyonam were the other members of my group. We chatted happily as we went for the missionary assignment. It was a period I would cherish in my life.

I remember winning souls in the surrounding villages like Akpafu Mempeasem, Akpafu Todzi, Lolobi, Santrokofi and many others.

A funny incident happened one morning when we visited Akpafu Todzi, I was preaching to a little group of young men only for a man in his late fifties to come around to say the rock on which I was standing, just to get my voice afar was his idol. It was so funny.

Soon, it was time for me to leave the village. The service postings were out, and I had to go register to fulfil my civic obligation.

Not to miss words, I had fallen in love with Enyonam, this I could not tell her, I was simply shy. I was 21 and she was only 19. I thought to myself, the right time would come.

I was posted to Gomoa Potsin for the National Service. It was to last for 11months, I thought in a basic school. I enjoyed the time with the children, and the time came for me to end it and apply for a place in any of the nation’s universities.

Fortunately, I got a place to study Economics at the University of Ghana. For four years, I did not visit the village, times had changed, now there are mobile phones all over, that notwithstanding, I did not have a link to my friend Richard nor the dream love of my life Enyonam.

I yearned for the day to come when I would meet her. I had hit 25now and would go round proposing to lady much more easily. I rehearsed my unwritten script for four good years, you can imagine.

I completed in June with a second class upper and was waiting to visit the village again before the postings were out in September.

I arrived at about 3pm, put my luggage down and quickly made my way to Richard’s end. There was no adult at my uncle’s end. I met some children who did not know me, time.

Richard had gone to his farm. I returned home and loitered till my uncle and his wife returned from farm. His two children had gone to live with my aunty in Kumasi.

Soon after we had spoken, I told him I wanted to see Richard, before I left, I enquired of Enyonam, all he said was, “she is fine”.

His answer should have struck me but it didn’t. All my attention was to see Richard and then start my “connection” from there.

It was getting dark. The village by this time had been connected to the national grid. There were street lights.

We hugged and greeted each other in our usual manner, Dzataba! I did not miss words, how is Enyo and where is she?

Where can I find her?

Not now, he said. But why? I asked almost immediately.

Richard wasn’t daft. He knew I had a soft spot for her but all of our conversation about her never ended in anything concrete. That was then.

Rich, tell me something. He was silent. I knew what he was going to say, is she married? I asked.

Yes, but that is not all. I was curious now.

Is she dead? Ah no! You would have heard that.

So what is it?

You know what, let’s get in and talk.

I was so anxious; we got into his chamber and hall. It was an old mud building.

The inside was cold, he begun, . . . four years ago, just after you left, a gentle man came to ask for her hand in marriage, he is one of the young rich people in our village who went to do business in Nigeria and returned.

Very little is known of exactly what business he went to do there. I was told that Enyonam was not in agreement from the beginning, but latter gave in to marrying the man.

The man died only last year of what is not clear to anyone in this village.

Enyo started falling ill from the beginning of this year, she has been in and out of hospital.

The last information I got was that she tested positive to HIV.

The church will be paying her a visit tomorrow morning, you can join us.

When he finished, I did not know what to say or do.

I sat there quietly and said, “okay, see you tomorrow, when are you leaving for the hospital?.”

“We shall meet at the church premise at 6:30am” he said, looking strangely into my face. He could read my mind.

I returned home, and went straight to bed. My room had been prepared, food had been served in village style, two little loaves of fufu in a bowl, the second bowl contained the soup. The two were on a table, neatly covered with a third containing water.

The children I found in my uncle’s house were busily roasting cocoyam in the fire, I called them and gave the food to them. My uncle was asleep by now.

I stayed awake in bed till the next morning, I would fall into sleep shortly and start to dream, or rather start to imagine. I would visualize how we went out on visitation and evangelism four years ago.

Soon, it was day break, I quickly greeted my uncle and his wife, I told him of my intention to join the team that was going to visit Enyonam at the hospital.

He knew straight away I had been told.

He shook his head and said, it is unfortunate.

I took a quick bath, got dressed and met them at the church premise. The experience was one of mixed feelings. Occasionally one would ask me, where I was and what I was doing. I would answer solemnly. It was obvious, everybody was waiting to take a look at Enyonam and for me, it was a period that I can’t explain. I didn’t know what to expect.

I had not seen a person with HIV before, let alone someone whose situation had gotten to the AIDS stage, to talk of a young lady I am in love with.

Soon we got to the Hohoe Hospital, it was an isolated ward. We were led in by a nurse, we entered the room that smelled of dettol.

No one spoke, eerie silence filled the room. We lined ourselves along the wall with our backs to the wall. It was a little room, she turned towards us and I am sure she was shocked to have seen me. Brother, she called, this is how all the youth in my uncle’s church used to call me.

I didn’t know how to respond. She turned her shy and bonny face away.

After some seconds, I called to her, Enyo. She turned to look at me, you’ll be alright okay?

She nodded in response. After some minutes of silence, the leader of the delegation asked that we have a time of prayer. We all closed our eyes and after singing one song, he prayed.

We presented some fruits and some cash in an envelope to her mum.

We left as though we were in a hurry to leave her presence.

As we returned, nobody uttered a word.

It was a Friday, I stayed until Sunday after Church and told my uncle I wanted to leave to Koforidua where my parents were.

He did not understand. But I had to, the village was no longer as exciting as I had envisaged.

Few months after I arrived, I received a call from Richard, Enyonam had been down with some Tuberculosis at the advanced stage, the doctors had done their best, but they could not save her life. She stayed at home for far too long before visiting the hospital.

The medical practitioners too did not test her for HIV on time, help came too late.

I loved her and yet never had the opportunity to tell her, but somebody I loved had just died of AIDS. I recount this incident with mixed feelings, why did she not demand an HIV test before getting married? I am sure she contracted the virus from the late husband.

Why did she give in to the man in the first place?

After the announcement to me, I attended her funeral. She was hurriedly buried.

Out of fear, I got tested myself, I tested negative, I declare my status everywhere I go and proudly protect it.

As for Enyo, Life they say is like a musical chord, one wrong note and the whole harmony is distorted.

If there is a God, may he help us all. Selah!