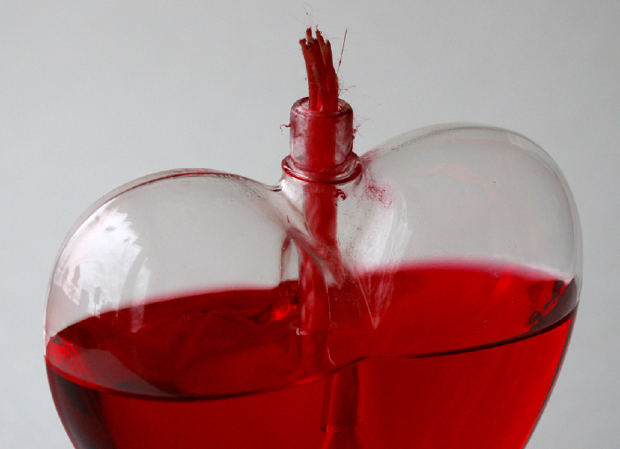 Once there was a boy and a girl. The girl was 21 years of age and the guy was 22. They were very good friends. They studied in the same school and also in the same class. They were like chuddy buddies. They would sit side by side, share each other’s lunch, play together, cover up for one another at the absence of one, share books and notes, travel home together after school, even go for the same tuition. They were like the best of friends. Twelve years passed and the friendship remained tight.

It’s now end of an era of friendship as they now graduated from high school and are looking forward to a new beginning. But, their friendship was so strong that they even got into the same college but sadly not the same department. As they slowly step into adulthood their friendship changed. They began to fall in love, slowly. They were so in love with each other that they were much public about, for instance, whenever they meet with each other they kiss, hold hands and walk across the streets, hug each other at times, never cared about what others said as they were too much in love.

Slowly, moving on, they together bought an apparent to live together under one roof. They moved in and their relationship changed again. They were now in a live-in relationship which is equivalent to marriage. They became inseparable and everyone in college noticed it. They were so inseparable that, when one went to the washroom the other would follow.

Now, their relationship has changed again. But this time it was weird. They now started sleeping together and make love to each other. They got so obsessed with it that they make love whenever they get the chance. Their love for each other now turned to lust. They are now addicted to watching porn most of the time. Their thoughts have become weird and dirty like how they would look without their clothes on, how fun would it be to make love at a public place and other such thoughts. They were so into it that they started making love in the college bathroom.

Now, there comes a problem one day. The girl gets sick and becomes very suspicious. She goes to the doctor for a check up without telling the guy. The guy has also started to show less interest towards the girl as he is in lust with another girl. The girl starts to distance herself from his lust as of her suspicion. She received her reports from the doctor and found out that her suspicion was true. She was pregnant with a four weeks year old foetus.

The girl was very happy that she was going to be a mother. She told the guy about her pregnancy. The guy was not happy. He was not ready to settle down and have a family. He started to distance himself from the girl even more. The girl ignored this distance as she was very happy about her pregnancy. The guy one day became very serious, came up to the girl and told her that he was not ready to be a father and that she should abort her child. The girl tried to convince the guy to get married or be as they are but he didn’t listen. After a few weeks the guy left the girl alone in the apartment to fend for herself and the unborn child. The girl had decided not to opt for abortion but to bring this child on earth.

Two months have passed. The guy got a phone call from the neighbour of their apartment who said that her girlfriend who is now his ex is dead. Meanwhile, the guy married the other girl he had a lust on and was happy with her. He came running to the apartment to see his ex dead with the unborn child. The police came and started to investigate the scene and found out that she was murdered. Investigation was on it’s course, evidence was gathered, and it was found that all evidence points towards his wife. The guy was furious because he thought he knew that his wife had no connection with his ex girlfriend.

Trial went on for days and atlast came to a conclusion that his wife did murder his ex girlfriend. The plot now thickens as many secrets are now revealed. The wife of the guy was a very good friend of the now dead girl who used to share their intimate secrets. The wife always had an eye for his husband before marriage. She wanted to have him. She made him believe that his ex girlfriend was pregnant with someone else’s child, which made the guy question and ask the ex girlfriend to go for abortion.

When the guy left the girl, the girl started to feel lonely and talk about it with the guy’s wife, unaware that she married her guy. They used to talk a lot and the wife began to feel that the ex girlfriend was becoming a threat to their marriage. If she came up with the child infront of the guy and his parents, then they would accept her and may move for divorce from the wife.

So, one fine normal day, the wife went to meet the girl at the apartment and killed her, making it look like a case of suicide from general view. She was relieved that the girl was out of her married life and posed no threat. But she committed a mistake, or we can say a fault. She came with a gift for the girl where she accidentally wrote her name and to whom it was meant for. She forgot to destroy the gift or take it back home or even hide it. This small fault led her to being convicted as a murderer and to be behind the bars for a lifetime.

The husband was so furious and sad that he started hating himself. He even started to become an introvert, not talk or meet anyone, used to work in the office like hell to keep such thoughts of his wife and ex girlfriend out of his mind. He started to tire himself so much that his daily routine became work and sleep. He also didn’t eat much as he was always tired.

All love stories don’t end on a happy note. The girl’s priority of love changed from the guy to the unborn child but she never stopped loving him. The guy may not be a murderer but it can be said that he was equally guilty. He was the first one to tell his girl to abort the foetus, which she didn’t adhere to. He now feels guilty all the time thinking about the decisions he made of how he left his pregnant love alone to fend for herself and marry someone else who hated her.

He was living in a delusion that his girlfriend had strayed from him and got pregnant with another guy, but he never had the courage to face her and ask her the truth as he was himself cheating on her with another girl. If the communication between them been strong, then nothing could have stopped them from having a happy family of their own and turning their best friend relationship to the ultimate of marriage and growing old together.