You are here: Home / Love and Romance / THE LOST LOVE: BESIDE A LAKE TREE 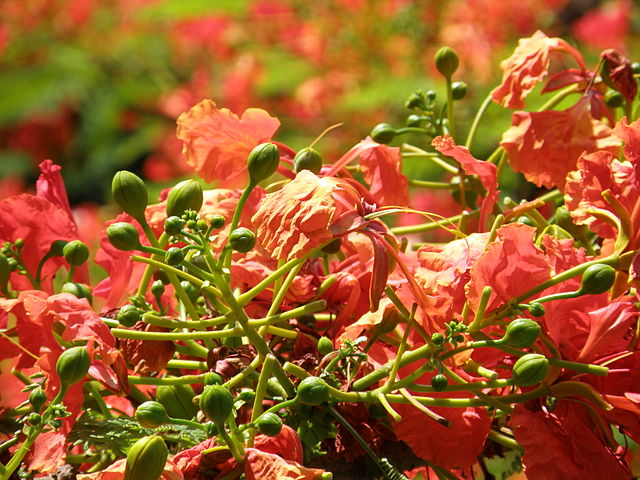 Aniket came here off and on in the afternoon, counted three to four times a week even. Recently he gets hardly any time to come here, making the place deserted for him. For the pressure of work in office he can’t way out time for him. But he couldn’t but feel this place to be the most extra mundane one. After a gap of long awaited time he find himself present on the brink of the lake, once he used to come with Anwesa. The sun like a reddish saucer is drowning gradually into the clouds in the west and trying to touch the furthest corner of lake. Now it is six past ten ,too early for Aniket being out of office. Fortunately he managed an early leave today. Taking the left bank of the lake Aniket approached towards the tree, whom he knew since long before. The tree altogether its branches is still standing in the same place, as if counting the elapsed time. Leaning against the trunk of the tree Aniket stood facing towards the lake. He knew about the beautiful red flowers, bloom in the tree, covering its branches. The flowers, dropped from the tree, spread under the tree like a flowery red carpet. Aniket took out his phone from right hand side trouser pocket, blowing a ring of smoke off. He became more impatient as time was passing by. It was almost five years ago since he last met her. In between he had no contact with her, not even over telephone. But till the last day of school they were very close to each other. They always went coaching classes together and everything else. Occasionally they sat together under this tree if it was a early ending of classes. Aniket can clearly remember those days till now but the memories are obscure like the fog in a winter morning.

Anwesa was brought up in her uncle’s house. Her parental residence was in North Bengal. Her father was a forest ranger. Anwesa and Aniket know each other from their childhood days. Her uncle’s house was in neighbourhood to Aniket’s one. Aniket can remember their everyday clamour for the advantageous position in the school cab. After completing school Aniket went to Kolkata for further studies. Anwesa left for North Bengal and got admitted in N.B.U. Contacts between them persisted some days after their parting but time made it weaker gradually. In the mean time Aniket’s open caged heart learned to fly in the deep blue sky. Aniket’s mobile rang suddenly at lunch time a day before yesterday.

The voice from other side floated like an angel’s dream, “Can you recognize me?”,making Aniket astounded.

“Sorry can’t recognize you. Would you be kind enough to reveal yourself!”

“Anwesa speaking, coming in next two or three days”, replied the other side.

Time seemed to be stopped to Aniket until Anwesa finished her last word before hanging up the line. Date was fixed at that time. But Aniket neither felt any old attraction nor any feelings of lost love. Having come here Aniket after a long time feels again same thing, which he didn’t know,but had lost. The lovely deep woods around the lake are trying to touch the heart of the lake. Some fragments of lost dream are flying scattered around. The darkness is gradually engulfing around. Dark shadows have started playing on the lake surface. Lots of trees have embanked the lake all around. Flock of evening birds , returning to their nests, are whirring. It seemed to Aniket that so many years have passed since he had heard chirping of evening birds. Amidst the chirping of birds, someone called from behind,

Turning back Aniket saw the star which had been lost from his life five years back. Not much changed physically. Only some shadow of knowledge hovering over her face. A beautiful blue bag nicely decorated with oyster’s shells was hanging from her hand.

Proposal came from Aniket, “Let’s sit here”, indicating towards the trunk of the tree.

As if time had started walking five years back. At a moment distance between them ceased to exist anymore. Everything was silent for some time. Cover of darkness was thickening itself and caos of the area was getting diminished gradually. Only the monotonous sound of crickets and sound of falling dry leaves from tree on the water were audible.

“Ani, have you noticed the tree has bent more towards the water!”

“Yeah ”, Aniket replied. “See the flowers are floating on the water as they used to be earlier.”

Aniket had found himself lost in the world of hills and cloud where clouds like fog whisper behind ears. He had lost in those days before five years. Suddenly he felt the lovely smell of the evening. One more fragrance was flying mixing with cold air of lake, the same smell which could be felt when seated behind Anwesa. At that moment a flower from the tree fell between them. The tree also might have been wanted to go five years back.

Taking the flower in her hand Anwesa asked, “What are you thinking silently?”

In his subconscious mind Aniket put his hand on Anwesa’s shoulder and whispering behind her, “Can you take me to the world of cloudy hills; where cloud plays over the valleys of mountain?”

Somehow Anwesa also rested herself on Aniket’s shoulder. A drop of water, slipped out of Anwesa’s eyes silently, couldn’t be identified in deep darkness. But it was obvious that their distance was gradually ceasing.