You are here: Home / Editor's Choice / The Living Light 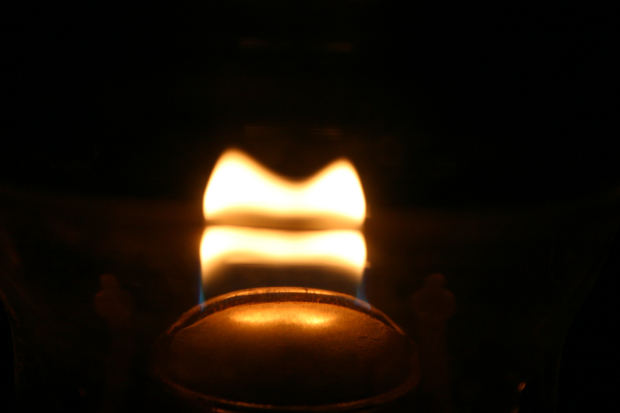 With tear drops trapped in his wrinkled face, Johan walked away from the waves that cleansed his tainted memories. He hoped the next storm will bring an end to his sixteen years of wait. As always the ocean showed the old man no sympathy as his despair builds. He glanced at the rusty old lantern on the sand for a moment, his rustic companion giving some consolation and brightness to his dreary existence. He engrossed every possible grin of its light in to his thick cataract layered eyes. He engaged in serious conversation with the bluish red flickering flame that he thought radiated her undying love. He imagined she was watching him through the waning light to signal her whereabouts. He stared at it all day and night when he felt lonely in his windowless dark shack near the ocean. Johan never let the time-worn blackened wick that witnessed his dreary life dry nor did he let the flame die. The flame lit by his wife Rose more than sixteen years ago was the only thing that kept him going this long.

The breeze buzzing in the ears from behind pushed Johan forward making him shake like the dead leaf clinging to the branch just before falling in the wind. The long pointed nose and the wide hairy ears made him look like the ghost of an alien sea creature from the past. He picked the lantern and walked forward with withered legs. He held the lantern close to his chest like the mother duck protecting it’s duckling under her wings. On the nearby rocks used as sea wall he heard the squawk of Seagulls. He walked as fast as he could, pulling his legs away from the wet sand locking his shoes. At times the breeze turned gusty pushed him forward to make him weightless and flying. He paused for a moment to look at the crack in the east clouds. It was preparing to paint the blurred sky in magnificent colors for the glorious entry of the rising sun. Johan closed his eyes while walking in the familiar sand like a little child. His head felt heavy no more and his mind was clearer than the cloudless blue skies in the mountains. The sand under his feet no more hindered his walk. To relax himself, he tried to smile, like someone who never smiled. His weak muscles on the cheeks ignored his feelings; but nothing stopped his delusions. He smelled the scented oil his wife used to use and felt the touch of her fingers on his forehead. He freed his right hand moving the lantern to the left and stretched it to hold her closer to him. He forgot himself and the world around him.

On reaching home, Johan with extreme care and shivering hands opened the side cap of the lantern and filled oil.  While capping he wiped the lamp with his bare hand to make sure it was shiny and smooth as always. He looked in to the light from the lamp without taking his eyes off.  Stepped back in a partial sitting position grabbing for the wooden armchair and settled on it. Rose’s eyes stared at him. Memories of the last days together with her… He felt he was watching a movie with the colorful memories of his love Rose in it.

When it came to his wife, Johan’s memory never heeded to age or time. No one loved like they loved each other. Rose and Johan celebrated every day of their life and, each day, hesitated to leave for another as perfection cannot be replaced easily with another one. Every morning, Rose kept the calendar circled with the days they were together, the beautiful days they never wanted to get erased from their memories. She collected the beautiful and rarest shells and pearls from the shore making their dream nest as if they were birds. She ran to the shore searching for the rarest of the rarest of them in the dark stormy nights. The Thunder in the skies made the pearls pop, the lightning gave them radiance. The storm made these beautiful dreams of her wash to the shores for her. Only Rose knew the deep secrets of the ocean. The ocean loved her as it knew she knew only to love.

Johan’s life was made to live in dreams far away from reality where Rose built castles to live and golden wings for him to fly. She took care of everything she could thin.  He never thought of living a moment without her. The past sixteen years, emptiness swallowed him every moment but filled it with the dreams they dreamed together. Johan looked at the half built pearl nest made with the rarest and the most beautiful pearls and shells.

Johan never noticed his wife had a fading memory. He thought it was their love that blinded her to forget things. Sometimes, she forgot to eat or cook but even lost her way home in the dark from the store few miles away. It was the doctor in the County hospital who said,

“Rose was losing her memory faster than the ocean current that takes the shores by surprise.”

He never worried about it as he knew he will be there for her always. Then… with few tears rolling down from his impassive eyes… he tried his best to get out from the past but failed and… Sixteen years ago on a stormy night like the one yesterday, she went looking for the precious and the rarest ones. The lightning and the thunder never stopped till morning. She forgot about everything else but filling her velvet bag with the precious pearls that were washed to shore by the roaring waves. Rose never came back that night, leaving Johan alone… waiting for her, forever.

He took the large Conch shell he got from the sea-shore the day after the night Rose went missing that he kept next to the half built pearl nest. Johan held the mouth of it next to his ears, where the sound of the ocean was encapsulated in it.  He strained all his muscles on his body and listened hard for Rose’s voice trapped in it.

This story is also published in my blog:  https://cyrilmukalel.blogspot.com/