You are here: Home / Social and Moral / Ambulance 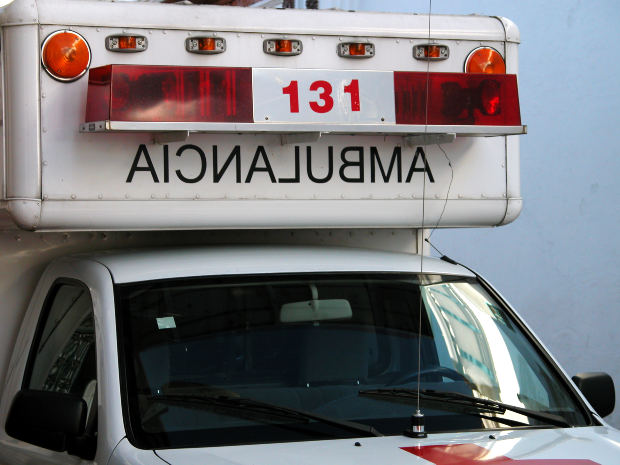 “Congratulations Mr. Mithun. You have been selected for this post in our hospital. I know it’s a very difficult job where you need to face lot of distressed people, the pain and the suffering. I have no doubt that you will do your job very well. Because you are the one who have cleared the stress interview and other psychological tests. You can join our Hospital for this position “Life attendant boy” today.

Yes unlike other hospitals we do care for the person who accompanies the patients in ambulance for them not to get panic. This job of yours is not only to assist the nurse and the doctor in the ambulance but also to provide personal assistance, medical attention, emotional support, or other personal care to the family who accompany the patient in ambulance.

Let me introduce our hospital ambulance driver kannan. He is working here since 10 years. He is very fast and bold person I have ever seen. You will be working with him. All the best.”

“That was really a cool introduction about you by the doctor. Why did he tell as fast and bold about you?” Mithun breaks his curiosity and asked kannan.

“Well you should ask this question to Doctor” Kannan gave a hasty reply.

“Err sorry. Please don’t mind. I was very curious to ask about it”.

“It’s ok. Shall we go to see the Ambulance?”

“Yes Why not.” Mithun replied.

Suddenly a phone call came to reception. Receptionist attended the call and informs the doctor and Ambulance driver kannan as they need to attend a Heart attack patient immediately. As soon as hearing the news Mithun turned back to Kannan to say “Let’s go. It’s my Day one job”. But he could see only Kannan rushing to the Hospital entrance.

He ran behind Kannan and manages to get the ambulance. Along with him a nurse and a doctor joined.

Kannan drove the ambulance very fast and reached the destination on time in spite of heavy traffic.

Mithun observed carefully what is needed and what is the medical equipment required to handle and assist the doctor. An Old man of around 70 ages is taken into the ambulance along with an old lady. The Mangal sutra on her neck revealed that she is the old man’s wife. A young lady consoled her and makes a sign that she will join them at hospital.

Mithun acted quickly. He pulled the stretcher and place the old man on stretcher and load the stretcher into ambulance. He also helped the old lady to get into the ambulance who is physically normal but mentally sick. The old man is administered with oxygen by the doctor. Meanwhile Mithun consoled the weeping old lady.

Mithun start realizing that after all this period of time Ambulance driver never turned back from his seat to have a look at what was going. Despite the weeping noise of the old lady, he was never distracted during his drive as well as at the spot where the patient was loaded into ambulance.

The Ambulance quickly reached the hospital on time. The old man is taken into the hospital and kept under observation at ICU.

Mithun after directing all the medical procedures and other administrative tasks such as maintaining information files and processing paperwork came near to Kannan.

“Splendid job Mr. Kannan !. I have never seen such a bold personality like you. I’m impressed with your fast and safe driving. Now I came to know why our doctor gave such an intro about you.” Mithun congratulated Kannan.

“Bro I follow a procedure to myself. I have attended many emergency cases in my service but I will never watch people or listen to their grief and cry. It’s because I believe if I’m emotionally affected I could not drive fast. It’s not that I’m weak hearted. But I want to be more concentrated and less distracted when I drive. At the time of driving, I just forget I’ m a Man with Heart which has got emotions. I just make myself as a Robo who drives this car with no emotions. I need to drive this ambulance and not let the emotions drive me.”

“You are Smart. Unlike I thought this is not an easy job. Today I got tensed seeing the suffering old man. My heart troubled on watching the weeping old lady. They look like my parents.” Mithun mourned.

During their conversation a group of people rushed into the hospital. Mithun saw the young lady, whom was giving signs to the old lady earlier when ambulance was taken. She was talking to that group of people and suddenly started to cry aloud.

Mithun asked the nurse nearby about the collapse and came to know that the old man was dead in spite of timed medical attention given by the doctors. To their shock he also learned that the old lady also died on hearing the death news of her husband.

“It’s not in our hands Mithun. It always happens. I have seen many cases like this. This is not new to me.” Kannan consoled Mithun.

“No. I have restrained her fear by telling many positive things. I infact prayed along with her and did my best to make her feel comfort. But still she died out of stress. I have not done my job well.”

Mithun continued his job of providing personal assistance, medical attention, and emotional support to the patient and their family during travel to hospital in ambulance. Now Mithun become more popular at the hospital for his performance and has become a hero among all patients.

Receptionist of the Hospital got a call from Downtown Toy shop.

“Yes. We will send the Ambulance. Can you please tell the exact address.” Before the receptionist about to ask something the call ended.

Receptionist was puzzled and called Mithun and Kannan.

“There has been an accident near Downtown Toy shop. A 5 year old girl met with an accident. You need to attend the case. But they have not mentioned the address. I have to search for the address. Can you please help me.” She hurried by searching for the phonebook.

“No problem. We will leave. That shop is nearby my house.” Saying so Kannan left urgently followed by Mithun. They left the place and reached the destination on time.

A Lady terribly cried holding a girl who is bleeding severely on her head. Mithun brought the stretcher and load the girl into the ambulance. Meanwhile he didn’t forget to console the mother of that child. Medical equipment kept ready in the ambulance. Emergency Medical procedures are carried on.

Ambulance was started after a sign given by Mithun. As usual Kannan didn’t react to the scenario and acted immediately to drive the ambulance. He didn’t notice what was happening. All he saw from back side was a woman with a child.

“Oh god please safe my child.” Mother of the girl cried. She got fainted on seeing her child suffering. Doctor and nurse are helpless. They don’t know whom to attend. Mithun helped them. They dribbled some water on her face and helped the lady to get up and relax.

“Mam please relax. Your child is quite alright. Do not worry. “ Mithun consoled the mother.

“No. How can I sit so relaxed watching my dying child?”

“Please stop. Do not utter the word dying. We can save your child. Believe us” Mithun put some positive and encouraging words for her.

On their way through main road two people on middle of the road argued with each other without giving way for other vehicles. This increased the traffic jam and thereby leaving more tension for the people inside the ambulance.

“What the hell is going on here? Won’t people hear the Ambulance siren? What I’m going to do?” again the girl’s mother started weeping even more. Mithun felt very bad but he said “Don’t worry. Its Kannan who is driving the ambulance. He will reach the hospital despite the heavy traffic”

But Kannan was very casual and drive the ambulance to another route which is not known to Mithun. Mithun asked from behind. “Is that a right way?”

Kannan didn’t utter a word and simply drove the ambulance faster. Within 5mins they reached the hospital. The child was immediately taken into the hospital.

“Well buddy again you have proved yourself. As you said, you should not get diverted at any cause and fall emotional while you are driving. Simply your job is to reach the hospital on time. You are right and that’s how you have saved your daughter this time. Please go to hospital to check her” Mithun told to Kannan with a satisfaction in his face for saving Kannan’s daughter.