You are here: Home / Social and Moral / THINK POSITIVELY 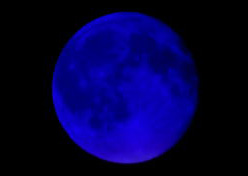 In a lunar eclipse day, one mom delivered her baby in a city hospital. The parents named the boy ajay prakash. He born like a normal child  before able to speak and his  family loved him. He started to speak slowly like other child.

One day he goes to play in the evening and because of the interest in the game ,he played till night. And the mom got frightened that where he had went and searched all places got more fear of  her child.But without knowing this the boy came cooly in night. The mom got angry and slapped and scolded vigorously that where he had went………The boy cried a lot and think “wait the dad will slap u today vigorously mom”……..

The dad came that  night and a quarell had made between mom and dad. In that quarell the dad slapped the mom vigorously else before… by seeing this the boy got a happy and fear in his mind.

After some days the boy joined a school and it was a little strict. One  the boy had made a fun in class so the teacher beat him on the stick harshly. He cried a lot and think “wait before u leaving this period u will slip and fall on the floor”……..

Like the same way he thought the teacher keep his leg on the water and fell …all the students laughed. Ajay got surprised with a confusion in his mind.

The days rolled on and while studying in high school the annual exam was conducted and he was get caught by the invigilator for copying and he was punished to get out of hall. He worried so much and think “wait all of u will ran out of the class “………..

He joined college and with his powers he had done lot of mischief and due to that he got a big friends gang and he lived happily because what he was thinking is happening …Slowly the friends came to know about his power..

On a bright sunny day , he went to the beach with his close friend.And they chatted for long time..The friend asked that why don’t u use that power to greater extent…. He laughed and told the power also has certain limit…But the friend instruct him to think bigger..He think “wait and see the plane going up to me will blast and fall here……..” and laugh….