You are here: Home / Social and Moral / Value 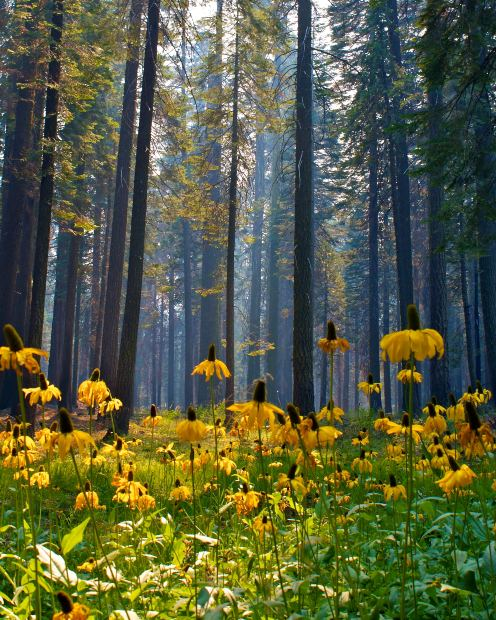 Hitarth was an extremely talented guy. He was very much interested in computers since his childhood and so he had decided to pursue Computer Engineering after his schools. He was also much fascinated with foreign countries and wanted to leave India and settle abroad like his neighbour. So, he studied very hard during his college days to fulfill his dreams and his efforts got paid off very well when he was placed in one of the leading IT firms of the world during campus placements.

His joy knew no bounds when the company’s HR said “Congratulations Hitarth! You have been selected for the post of Junior Software Engineer in our firm. You can join us as soon as you complete your education”.

He wanted to share this good news with his parents since it was due to their efforts that he had reached this stage. He came home running and the moment he saw his mother, he went to her and touched her feet gently. It did not take a single moment for his mother to understand that her son has emerged as a winner since he had already mentioned her about the interview in the morning before leaving from his house. His father too was delighted at his son’s achievement. They all prayed and thanked God for everything.

Soon days passed by and Hitarth completed his degree with flying colors. Finally the day arrived when he had to join the company. He was extremely nervous but at the same time excited to face the world with new confidence. He made new friends who were freshers like him but they were from different colleges.

His journey of transformation had already started from the first day. All the new joinees were divided into group of 20 members and were assigned to different technologies. Hitarth was assigned to Java technology. The company trained all these freshers in their respective technologies. Hitarth, being smart and talented, always scored better than the rest in all the tests that were taken at the end of the trainings.

Eventually, he was assigned to a project much earlier than others due to his strong learning ability and creative thinking. He started working and learning dedicatedly. He never said no to any work. He began working day and night and sometimes even on weekends. Within a year he got a promotion. He was extremely happy.

His project manager Mr. Kohli was monitoring his progress carefully and was highly impressed with his performance. It was really unbelievable for him to see that Hitarth, who had an experience of just one year, was able to deal with the clients so well. At times, he even performed better than his seniors.

Another year passed and Hitarth became more and more accurate and sharp in his skills. One fine day, Mr. Kohli decided to send him abroad so that he can work closely with the clients and get more business and profit to the company.

While Hitarth was busy in debugging the code, Mr. Kohli called him to his cabin.

“Hitarth, what are you doing?” questioned Mr. Kohli.

Hitarth was bit confused by his manager’s question. He thought that he might have made some serious mistake and so his manager has called him to scold at him.

“What happened, Sir?” He asked, perplexed.

“There is a news for you.” Mr. Kohli said with a stern face.

Hitarth was extremely terrified. Mr. Kohli saw his innocent face and could not control his laughter. He finally said, “Don’t worry my boy. You have not done anything wrong. In fact, looking at your hard work and dedication, the company has decided to send you to Singapore for one year to work with our clients and get more business for us but, mind you, as per the company’s policy, you cannot come back within a year. All the Best and keep up the good work.”

Hitarth could not believe his ears. He thanked Mr. Kohli from the bottom of his heart. He always had a dream to go abroad and settle there but looking at the financial status of his family, he never expressed his desire to his parents. But now, he was on cloud nine. He could live his dream and he had earned it on his own merits.

His parents were speechless when they got the news. They did not want their only son to leave them and go abroad but they also did not want to become hurdle in their son’s flourishing career. So, they made up their mind and congratulated him for another feather in his cap. Within two weeks, Hitarth received his work permit and he flew to Singapore.

Initial days were really good for him since he was busy with his work in the office on weekdays and he explored the new country on weekends. He visited most of the tourist places like Universal Studios, S.E.A Aquarium, Gardens by the Bay, Merlion Park, Sentosa Island, Singapore Flyer, Night Safari, Singapore Zoo and many more. He was really spell bound by the beauty of the new country.

He desperately wanted to go back to India. He was eagerly waiting for the days to pass by. He thought to himself – Is this what I really wanted? Was I not really happy when I was in my own country with my own people? Why did I think of settling in abroad?

He thought a lot about it but he could do nothing. The company had put a lot of faith in him. He could not ruin his company’s name. So he decided to stay back and complete his duration but he missed India a lot in his heart.

Finally, a year passed by and Hitarth heaved a sigh of relief. Looking at his performance, the clients wanted to extend his duration in Singapore but Hitarth convinced them that he would work with the same dedication and passion from India. Initially, the clients were reluctant but Hitarth was adamant so they had to agree.

When he landed in India, tears rolled down his cheeks and he spoke to himself – “A value is not valued until you value its value.” He had truly understood the value of India and his family in this one year.