You are here: Home / Social and Moral / The Black Cat 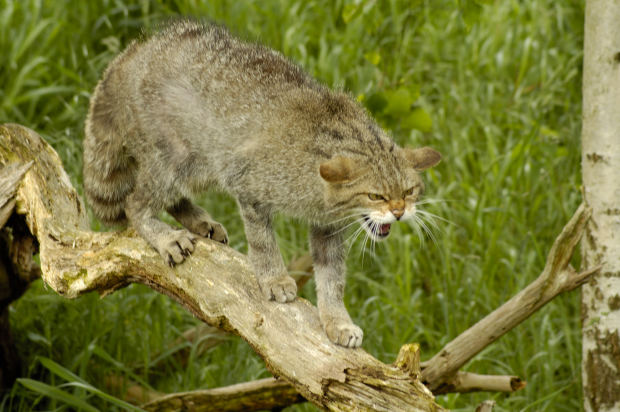 A cackle sounded stridently in his ears and he forced himself awake. ‘What the hell was that?’, Mahesh wondered.

“This good-for-nothing is supposed to take care of us? This one??”

A round stout woman stood in the room, with one hand on her hips and the other holding a rolling pin. The room barely qualified as a room. It was a square space with a rusted iron-grey trunk, a table lookalike and a mattress, torn and holed, with a crumpled bedsheet containing Mahesh, who was trying to disentangle himself from a confused tangle of his bedsheets and sleep. He glanced at his cellphone, which was probably the first cellphone ever made. Those phones had probably stopped selling now and that was the precise reason he had managed to get a second-hand specimen.

It was 7:30 am. He had one hour to reach his workplace. It had not been an easy task to procure that job. From the intricate webs of babudom and “Office-Office” scenarios, he had managed to befriend a middle-aged personage with betel-stained teeth and a Bihari accent. Thanks to Mishraji, Mahesh was not unemployed anymore. He had managed to maintain the thatch above their heads;,the thatch that his father had created with backbreaking daily wage labour at the nearby mall construction site. Food, clothing, shelter and work-his life’s aim was to successfully juggle these balls that supported his existence.

Today, however, he was about to drop the ball which bolstered the others, the work ball. He rushed out of the room into the balcony, to the left end of which was a tap, beneath which stood a peacock blue bucket with a flashy red mug hanging by it. On the thick railing, lay an emaciated soap block which Mahesh vigorously rubbed himself with, while the bucket filled to the brim as the tap ran. In a few minutes, he finished his ablutions. Grabbing his black backpack, he drank down a glass of milk that his mother had set for him in a single gulp.

“You must eat a biscuit with it. Never drink milk on an empty….” He didn’t wait to hear her mother finish her sentence.

Taking large strides, he reached the bus stop, already packed with people like him. As he prepared to cross the road, a black cat scurried past him. He groaned. It was destined to be a shitty day for him.

He halted at the corner most post of the bus stop so he could catch the bus as it entered. However, his efforts were not enough. There were at least a dozen youngsters like him waiting to win a paid bus ride. His daily competition started early. The day began with the race against time and the battle with sleep in the morning, proceeding further to the bus kerfuffle and the workplace chaos, consummating in household tension.

A red bus thundered by. Only a handful of people boarded it. Mahesh was not one of them. Wasting 20 bucks one-way to office was nothing less than profligacy to him. He waited for a green bus, impatiently glancing at his phone.

His prayers were answered as a green bus appeared to be coming from some way off. The green monster thundered to a halt and its preys hounded it to ultimately disappear into its jaws. Hardly a man got expelled before the jaws snapped shut.

Mahesh had failed to get sucked into the belly of the monster as the bus had parked itself far ahead of Mahesh’s standpoint. He had grown panicky now. He must take the next bus or his livelihood would be in jeopardy. He fixed his eyes on the direction from which the bus was expected to arrive.

A flaming orange hulk came blundering to a stop a few paces behind where Mahesh stood. A horde of people like fireflies attracted to light, flocked the door. Mahesh knew that he had to get in somehow. The front door had not been opened and it looked as if he would miss out on this one too. But Mahesh refused to accept it. It was his last chance to reach his work on time. He shoved and heaved but could not manage to get in. The passengers started showering him with invectives. The driver pressed the race. The bus began moving. He held on to the door handle and managed to get a single foothold as the bus assumed full speed.

Mahesh heaved a sigh of relief. However, the relief was short-lived. He was still half dangling in the air when the rear doors slammed shut, inducing panic and causing him to fall back on the other passengers, earning their displeasure. He felt his back getting clamped as he struggled to free his legs from the clutches of the automated doors.

‘High tech measures are not meant for this country’, Mahesh thought. ‘At least not in a country where every inch of space is claimed by some kind of a living creature.’

The bus lurched to another stop.

“There is not an inch of space left!”

“Don’t you stop driver bhaiyya!” exclaimed a few passengers. The others murmured their assent. However, where there is life, there is hope. And so with the hope of managing within whatever space was available, some brave folks climbed aboard, crushing Mahesh between two men and a woman. He was now sandwiched between them in such a manner that his hands rested on someone’s shoulders, his back was taut against the woman and his legs were stiff and supported against someone else’s. He dared not move in the fear of either offending the lady or losing his balance. They were all standing on the floor of the bus, jostled against each other in such a fitting manner as the pieces of a jigsaw puzzle.

Mahesh looked out of a distant window, gauging the distance left for him to reach his office when he suddenly felt incredibly light. He reached for his bag but couldn’t find the strap on his arm. His heart nearly stopped. He hadn’t even bought his ticket yet. His eyes frantically roved over the space around him and he saw his modest bag suspended in the air supported by someone’s elbow and another’s shoulder. His confidence began to return and he fetched his bag, holding it now between his arms since the strap had come off in the hustle-bustle.

He decided to buy the ticket before the TCs decided to prey on him. He tried to adjust his bag so he could take the money out. All of a sudden, he felt as if he was being smothered and his chest felt constricted. He couldn’t breathe. He felt as if the crowd would converge on him and squash him flat. The thought brought out his fears in the form of bile. Claustrophobia tugged at his insides and he started retching.

“Oh God! Get this man out! What is he up to?!” a woman screamed. Others started making way. Surprisingly, space was automatically created at his retching. “Open the door for God’s sake! He will vomit on all of us!” someone shouted from behind.

Mahesh couldn’t have felt worse. He had never felt claustrophobic before. He was heavily mortified and yet, the uppermost thing on his mind was air. He needed fresh air.

“Why do you people drink liquids before travelling? You must have had milk or something! Are you a kid? Do you have to be taught these things now?”, the conductor scolded him. As if on cue, he retched. As he was about to spew up, people parted further. The woman against whom he had been standing could not move away in time. Mahesh couldn’t help it and he barfed. “Ewww!!”, the woman made a grotesque face. Mahesh was sure that now he would definitely be slapped or driven out of the bus or something but as he looked down to detect the extent of the damage he had wreaked, he saw that there was some puke right between her heeled sandals. He had miraculously managed to maintain space-time complexity. Just then, the doors mercifully opened and he vomited out onto a sidewalk while holding fast onto the door handle.

“Drop him off!”, someone suggested. However, an old man disagreed saying, “No, let him stay. Where will the poor lad go from here? There is no mode of transport around.” And so, Mahesh leaned back as the doors clanked shut again. The day couldn’t have started off worse. He was late for work, had had nothing to eat in the morning, had just ejected out whatever he had consumed the night before, had earned revulsion from the fellow passengers and must be smelling obnoxious.

The bus came to a stop yet again and suddenly there was a lot of commotion. He didn’t have to look around much for the source. The day had gone a shade more awful. His worst fears had come true. The dreaded TCs were here. He tried to hand over a 10-rupee note to the conductor over the heads of the people, when an aged tough looking TC took him by the arm and carried him down the bus. He didn’t bother to explain because he knew it would have looked like an excuse. He followed the Ticket Checkers meekly. Now, he would miss work, lose money and probably be beaten. Or he might be lucky enough to be let off with a lecture, which didn’t seem a very plausible prospect considering the course of events throughout the day. It looked like the black cat had taken its revenge on him.