You are here: Home / Social and Moral / OBSESSED – Short Story with Moral Lesson 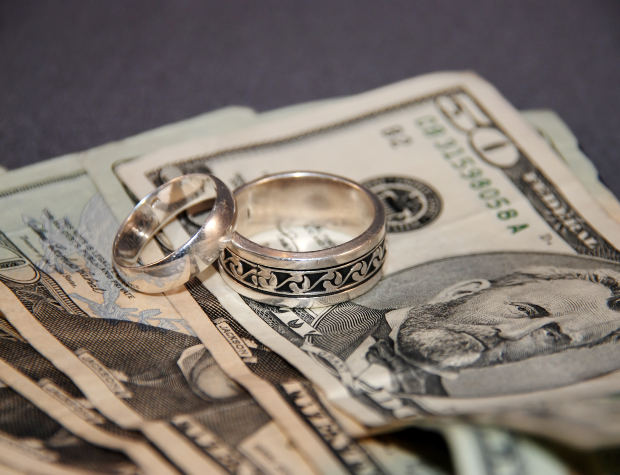 Here I’m back after a long break with a true story that happened around my place. For privacy reasons I’m not disclosing the real names. The story goes like this.

It’s about a christian family very rich husband and wife with two daughters. They recently bought a new beach bungalow and settled down in Goa. Their bungalow was aloof and close to the beach. They had two dogs too to scare away trespassers. The husband was running his own business in Dubai and stayed most of the time there, where as the wife and kids stayed here. They had a car and a scooter too. They appointed a driver for their car and a lady maid in the house from the neighbouring village. The news of this rich family spread like forest fire in the area. The wife was good looking and her elder child was 10 years old and the second was 4 years old. Every one wanted get a glimpse of this lady as she dressed up so ravishing.

All was going well till fate struck the family . The husband used to send 50 thousand every month for family expenses. The wife started getting intimate with the driver and both fell in love with each other. Her loneliness was killing her a lot. As days passed the driver started controlling the house and the kids. He even started extracting money out of the lady. Things were not so good suddenly the husband landed unexpectedly and smelt something fishy going on in the house the children were threatened by both the driver and the mother warning them not to say any thing to their father about their affair. But the father took the elder daughter for a drive and got the total truth out and was shattered after hearing it as well he was angry too, so he decided to stop the driver and fired him. The wife opposed it saying he was very helpful and a good person yet the husband refused and warned his wife and said that he would take them to Dubai later. He left after a short stay. The driver was back in the house with a vengeance. He hit the elder daughter and threatened to drown her in the sea if she complaints to her father. The mom also beat her up. The little girl was shocked frightened. She kept shut.

Months passed. Husband used to call every day to find out the situation but no one told him the truth. Both the driver and the lady were living together like husband and wife. The people around came to know the truth and some even wanted to help the children as they were tortured in their own house. The lady would say nothing when the driver beats up the kids. She was so obsessed with him that she could not live without him. Some how the elder girl passed the information to the milk man with her fathers mobile number. The milk man called up the father and revealed to him the exact situation of the family. The father immediately left for Goa to save the children. Here the situation had gone worse from bad. The wife was ready to do anything to save the lover. They even hatched a plot to kill the husband. As the house was on her name, they wanted to sell it off and leave. The husband got in touch with the local police officer explained the situation and asked for help the police rescued the kids from the house but the wife had gone absconding with the driver and large amount of cash and jewelry.

The police started searching for both and finally caught them at Mumbai. To every ones shock they found out that the lady was drugged and the driver missing with the cash and jewelry. She was admitted to a hospital and tests showed that she was under the influence of drugs for many months. The driver had given her drugs and kept her in the same condition for months. After a months search the driver was caught too. Now the wife and kids have left the country and settled in Dubai but those moments are still haunting the child. God bless this family now.