You are here: Home / Social and Moral / A Case of Mistaken Identity 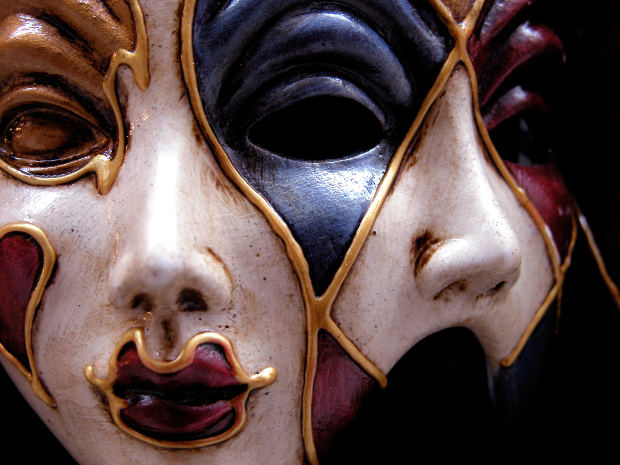 I tried to focus on the face that was obscured by the bright lights burning behind her.  A dark shadow twitching nervously.  I could make out the outline of her overcoat – a heavy suede brown coloured outfit. The hood of the coat covered the sides of her face. It was clasped tightly around her waist and fell below her knees, drowning her in its layers.

She clasped and unclasped her hands and coughed, in an effort to clear the imaginary phlegm. Then her shadowed face looked towards me. I could discern her large brown eyes, blinking rapidly, peering through the edges of the hood, her lips quivering with every motion that she unconsciously made. Clearly she wanted to say something, but was unsure about how to do it.

I didn’t care. The throbbing dull metallic sound was back in my ears. The doctor had called it a mild case of tinnitus. Mild. My ass. Clearly the doctor had never been victimized by this tinnitus; else he wouldn’t have casually labelled it so and sent me home with a pain reliever which I strongly suspect was a placebo. And this tinnitus was clearly indicating its presence now. The bottle of alcohol that I had downed an hour ago also provided no respite. Things are groggy, sure, but I can still feel the pain and the noise that is building up in my eardrums.

“Are you all right?” a soft, barely there voice queried.

I grunted.  I didn’t mean to be rude. Even though I may not be convent educated, I know my manners. I couldn’t speak due to the throbbing pain that had started growing roots in my brain.

And the lights! They were killing me. I groaned and closed my eyes, fumbling my way to the switch.

There! Much better now with the lights switched off.

I always liked the dark. Maybe it has something to do with the circumstances that followed after I was born. They say my mother after having given birth had then tied a blanket around my tiny body, my head and my nose. Then she pushed this bundle underneath a berth in a train, behind the luggage. For six hours, I went unnoticed. My mother had slipped away at the earliest opportunity. I owe my life not to her, but to the rats, that had discovered me and had started nibbling my toes and ears, when soon their squeaky noises drew the curiosity of a young urchin who retrieved me from behind.

I couldn’t see the girl anymore. But I could smell her – Chanel.  I had once worked in the perfume department of one of the fancy stores that is there in the downtown area. Even though I worked there only for a few weeks before being kicked out for suspected foul play, I know my perfumes.

Chanel – Mademoiselle. That’s what this spoilt rich kid was wearing. Since when did twelve year olds start putting Chanel? In my opinion, if you ask me, these new age parents are spoiling their kids. Not that I cared. The only thing I cared was money. And a twelve year old who wears Chanel is the brand ambassador of money.  I had already placed a telephonic call, right after I had abducted her in front of the dance school.

It was raining cats and dogs and she stood huddled in her overcoat, trying to protect herself from the downpour, shrinking within the comforts of the layers that the coat had to offer. But although it protected her from the rain, it was not enough to protect her from me. Standing beside her BMW, looking around nervously, she was caught unaware as I pulled her into the car and drove her all the way to the outskirts of the city before dumping her in this abandoned bungalow which is serving as my temporary hideout.

I gave the distraught parents forty eight hours before their precious princess would be gone forever if they didn’t cough up the money or if they tried to involve the police. Needless reminders, but important nonetheless. It was a huge sum, based on my previous heists. And it brought a smile to my lips that quickly metamorphosed into excruciating pain. Damn that tinnitus. I grimaced, exhaling slowly.

“They will not pay you” said a docile voice piercing through the darkness, stabbing suddenly at my thoughts, my dreams.

“They will not pay…” There she goes again. Stabbing mercilessly.

A sudden convulsion shook my body, the fire blazing in my bloodshot eyes, I glared in the direction the voice had come from.

“Shutup” – I said, gathering up all the meanness I could in my voice, hoping to quell any rebellious thoughts in her head and any doubts in mine.

Silence ensued for five minutes, in which I could hear her fidgeting in the dark, her coat causing a muffled sound. I could hear the small scared breaths. But this power gave me no comfort. Along with the pulsating pain a new kind of dread had started making its presence in my head.

I kept quiet. I didn’t like the conviction that the voice carried. I forgot about the pain, my mind as if controlled remotely by that voice started dwelling on the negative.

“It’s a case of mistaken identity. Jen has a secret boyfriend whom she visits from time to time and while she does that I become her”

I held my breath, my heart was constricting in an unaccustomed manner.

“Yesterday, we both left for the dance class, swapped our overcoats and she departed to meet her boyfriend, which is the usual routine, while I stayed back till the class finished. That is when you kidnapped me as I waited at the gate for her to return… ”

I felt my body go numb, my eyes closed on their own, I clenched my fist and a loud roar escaped my mouth.

“Nooooooo” I screamed and banged my fist against the floor. I heard her retreat further into the corner.

“I am just the driver’s daughter…don’t kill me please”, the words came intermittently through the sobs.

I got up, disoriented from the pain, the booze but more so from the girl’s narrative. I stumbled towards the door, opened the lock with the key, turned, looked in her direction and threw some money on the floor.

“Go home”, I said as I walked away with a nagging guilt, merging into the darkness that was engulfing the city.

Morning found me at the railway station, sprawled on a bench. Wincing, I opened my eyes, my mind increasingly aware of pain from parts of the body that I had no idea existed.  The tinnitus had thankfully subsided and was just a dull pulsating entity somewhere in the back.  Gloomily, I got up and walked towards the tea stall to get my daily dosage of morning beverage, the one that I could afford.

I sipped my tea, slowly, savoring every bit of it for I was not sure when the next one would come by. I scanned the crowd on the platform, looking for an easy target for picking up a pocket or two, when my eyes were drawn to the newspaper article that stared at me.

I walked towards the man holding the paper, standing adjacent to him I craned my neck slightly.

I swallowed.  I could feel the hammering in my head return.

The kidnapped girl feigned a case of mistaken identity, a confusion borne out of swapped overcoats and taking advantage of the kidnapper who was clearly a novice and suffering from some kind of disease, the smart teen had been able to walk away home, unscathed, using the money given by the kidnapper himself!

I stared at the lines till they blurred because of the tears that formed in my eyes because of the boiling rage within. I started jumping, screaming, and scaring the other people away, till I saw from the corner of the eye a policeman move in my direction brandishing his stick at me. I fled away in anger and shame, cursing the smart girl for leaving me with a memory of a day that would forever continue to mock me my whole life.